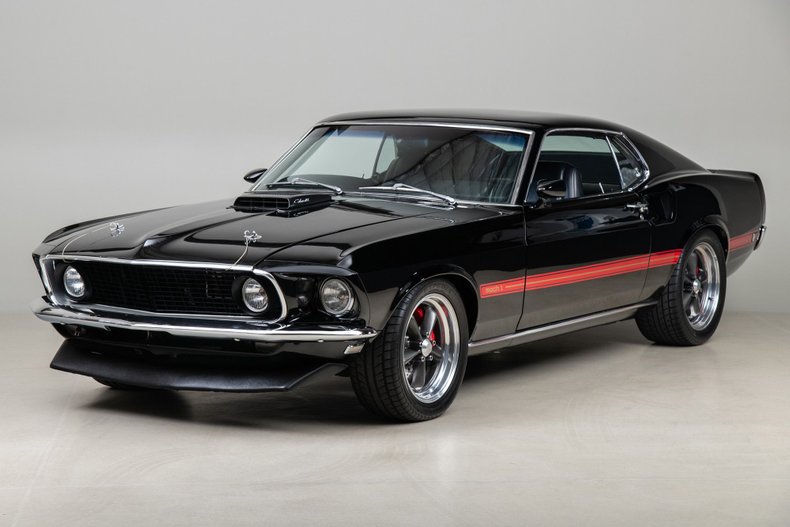 1969 Ford Mustang Mach 1 Cobra Jet VIN: 9T02R178641 No-expense-spared Mustang Mach 1 restomod by Canepa Original Cobra Jet 428 upgraded to 490 horsepower and 517lb/ft of torque Tremec 5-speed manual transmission, modern-era suspension and brake systems installed Vintage Air A/C system, upgraded cooling system, interior sound/heat insulation A true one-of-one Mach 1 build with modern performance and vintage looks The most rewarding Mustang Mach 1 to drive, period. Bruce Canepa Never meet your heroes is likely something youll hear as you search for your pedestal-sitting automobile. Youve held it in such high regard for so long that when you first drive it you may end up being underwhelmed or, even worse, disappointed. However, the evolution of the restomod has completely changed that phrase and what it means to enjoy a vintage car, and nothing personifies this more than this Mach 1. Mega power, modern suspension, modern comfort amenities, and of course old-school sex appeal all apply here with a no-expense-spared build of this 1969 Ford Mustang Mach 1. Finding an original rust-free Mach 1 Cobra Jet is sometimes a lifetime search for some, and this Mustang had something special in store for it. A previous owner wanted the perfect pony car and found this example, a numbers-matching example that had received a $100,000 rotisserie restoration. He drove the car for the very first time and it was immediately apparent that he had gotten used to modern car performance. In modern terms, driving a stock Mach 1s performance does not hold up due to major deficiencies in the brake and suspension department, trying to keep up with the 335 horsepower, big block 428 Cobra Jet engine. After a few more drives and thinking about what to do, in 2007 he brought the car to Canepa and from there the Mustang would become the ultimate Mach 1 Cobra Jet restomod. The project spanned the course of three years, an on-going project with additions constantly being made. Bruce Canepa quickly understood and knew what to do: make the Mach 1 outperform modern cars, keeping it as stock-looking as possible, without making any permanent changes that couldnt be returned to stock if desired. Three main areas were addressed to upgrade the Mach 1: engine and transmission, suspension and brakes, and comfort amenities. The build process began by removing the stock suspension, brakes, steering, and drivetrain. Canepa Motorsports racing mechanics evaluated and determined what would be done to have the car perform to the highest level, all while remaining streetable and comfortable. Before the car was taken apart Bruce had a vision for the Mach 1. It would be lowered a 1 and be fitted with 17 Torque Thrust wheels that accepted modern high-performance tires. The suspension received a set of Maier racing springs, custom-valved Koni adjustable shock absorbers, larger sway bars, Maier reinforced front control arms, shock tower brace, polyurethane bushings, and custom built 17 Torque Thrust wheels with high performance Bridgestone tires. The brakes were completely upgraded with a set of Baer 6-piston Pro+13 disc brakes front and rear connected to all new brake lines. Steering was upgraded with Unisteers power rack and pinion kit, with a subframe cradle to reduce front end flex under heavy loads during cornering and braking. Once all the suspension and steering modifications were completed, it was corner weighted and aligned by Canepa Motorsport racing technicians. The heart of the Mach 1 is the prodigious 428 Cobra Jet engine, barely fitting underneath the bodywork evident by the factory Shaker hood. Bruce wanted more out of the engine, freeing up horsepower that modern technology now could deliver. The engine was stripped down, blueprinted, and the big block was rebuilt to 465 cubic inches, yielding an astounding 490 horsepower and 517lb/ft of torque. The engine received new Edelbrock Performer RPM aluminum cylinder heads, forged

Note from the publisher:
Welcome to our collector car marketplace where we feature thousands of classified ad listings of vintage cars for sale. We hope that you will bookmark our site and visit often; our cars are updated every day. Furthermore we encourage you to subscribe to our mailing list so that we may periodically notify you of interesting classic cars that become available.
Home > Classic Cars For Sale > Ford > Mustang > 1969 Ford Mustang