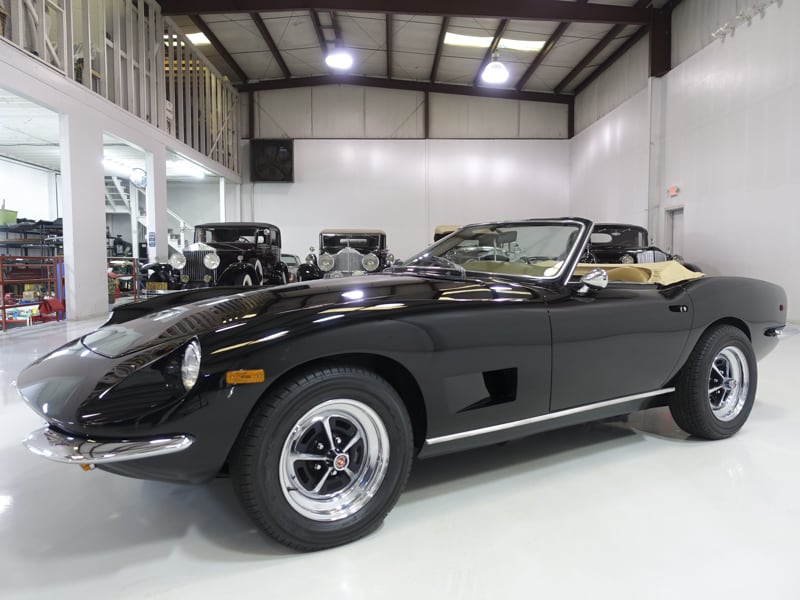 Price: USD $159,900
Knowledgeable sports car enthusiasts are quick to perk up when they hear the name Intermeccanica and with good reason. Intermeccanica was established in 1959 by chemical engineer Frank Reisner and his wife, Paula. Their cars combined Italian artistry with an American drivetrain. The Reisners were passionate car enthusiasts who loved sports cars and racing. They traveled to Europe and settled in Torino, Italy, where they opened their company and began manufacturing aftermarket performance parts. In 1967, after a series of names, ownership, and engineering changes within the company, the Reisners began producing the stunning Italia Spyder. The first Italias were exported to the United States in 1968. The cars were unlike anything else on the market and quickly gained discerning American car lovers attention. However, with limited production and a dear price tag of $8,500, only the affluent could afford them. To many aficionados, the 1968 Intermeccanica Italia Spyder was an automotive masterpiece. The cars prancing bull badging was a gracious nod to Torinos coat of arms. Its styling, which was classic Italian with vintage Ferrari undertones, was elegant. Its performance was equally impressive, as it could reach 060 in 6.2 seconds and had a top speed of 155 mph, which was attained through a powerful and proven Ford V-8 engine. The Italias steel body was hand-formed, and its chassis was made from tubular steel. With only 354 produced from 1967 to 1973, the Italia has since taken on an appealing mystique as a rare automobile. Today, it is highly desired by collectors and enthusiasts who seek a genuine classic Italian sports cars thrill. The 1969 Intermeccanica Italia Spyder featured here is finished in the sought after color combination of Nero Black over the rich tan leather interior and tan folding convertible top. The Torino, Italy, works completed this particular example in July 1969 with U.S. specification equipment, including air conditioning and power windows. This limited-production Italian sports car was formally owned by a senior analyst with Keith Martins Sports Car Market magazine and presents wonderfully today, having been subjected to a beautiful restoration. A mere 28,125 miles are present on the odometer, a number that is believed to reflect the total mileage accrued since new. A well-sorted example, this Italia is perfect for those seeking the timeless style of 1960s Italian sports car motoring while appreciating the power and reliability of the Ford 5.8 liter V8 engine! We are proud to offer this stunning 1969 Intermeccanica Italia Spyder to the value-minded collector, investor, or enthusiast who appreciates limited production model motorcars and timeless Italian design. Classic cars have proven to be among the most resilient and rewarding investments in recent years, with the Historic Automobile Group Index (HAGI) jumping 39% in 2013, 16% in 2014, and 17% in 2015 while posting gains of 467% over the last 10 years. Ready to make an investment that you can actually enjoy? Pleasecontact one of our expert sales consultants for more information. They will be happy to give you a complete walk-around, supply you with a more detailed description, and answer any questions you may have. Buy with confidence. *Please note that this late 1969 model was likely first registered in 1970 and is titled as a 1970 model.

Note from the publisher:
Welcome to our collector car marketplace where we feature thousands of classified ad listings of vintage cars for sale. We hope that you will bookmark our site and visit often; our cars are updated every day. Furthermore we encourage you to subscribe to our mailing list so that we may periodically notify you of interesting classic cars that become available.
Home > Classic Cars For Sale > Intermeccanica > Italia > 1969 Intermeccanica Italia