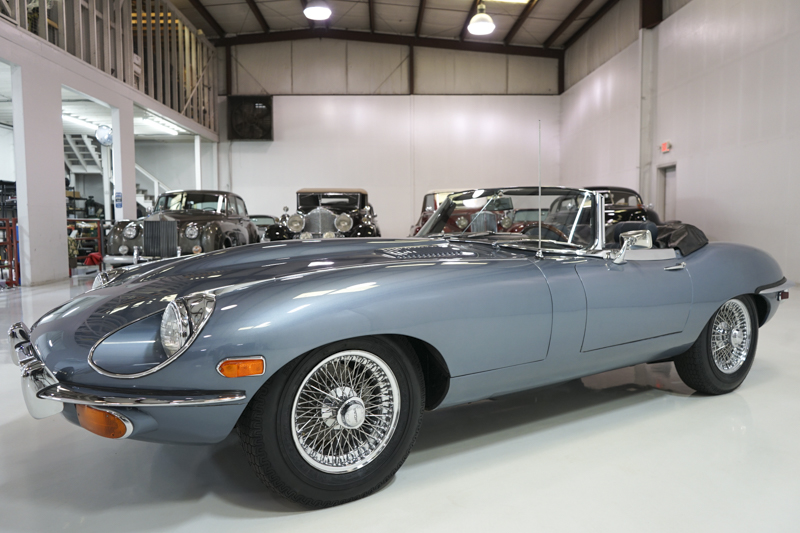 Price: USD $109,900
Mileage: 2
Considered by many to be the quintessential British Sports Car, the Jaguar E-Types unveiling in 1961 caused a sensation both with the press and in the public eye. Admirers came from all walks of life; even Enzo Ferrari referred to it as the most beautiful car ever made. Beneath its gorgeous looks was a revolutionary sports car with rack and pinion steering, fully independent suspension, and four wheel disc brakes with inward rear rotors. All of this was propelled by the already proven performance of the XK engine. The Series II E-Type was released in 1968 and continued the trend of strong performance and handling mated with an iconic shape. Improvements were plentiful and included an increased grille opening to aid in cooling as well as a more refined interior that satisfied even the sportiest of drivers. All Series II E-types featured the larger 4.2 litre engine, which was good for over 240hp in U.S. specification. With further refinements, proven performance and stylish lines, it is no wonder why examples have become highly sought-after by classic Jaguar collectors and enthusiasts.

The 1969 Jaguar E-Type Series II Roadster featured here is finished in the stunning color combination of Opalescent Silver Blue metallic over a Royal Blue leather interior and black folding convertible top. This particular E-type is virtually a one owner example having been sold new to a U.S. Navy fighter pilot in San Diego who owned the car for less than two months as he soon after started a family. It was then passed to a friend, and fellow Navy fighter pilot, who meticulously maintained this example for nearly 50 years! During which the E-type regularly participated in local and regional judged events for the Jaguar Club North America. Nearly 30 years worth of JCNA judging sheets document over 20 driven class wins, while and incredible amount of service records and invoices date back to 1989! In 2013 producers of the popular streaming series Comedians in Cars Getting Coffee, hosted by comedian and car enthusiast Jerry Seinfeld, borrowed this E-type for the filming of the Season 2 premiere with guest Sarah Silverman. Mr. Seinfeld made sure to pass along to the Jaguars long term owner that the Opalescent Silver Blue E-type was his favorite car the production had borrowed thus far and a photo of the car with Jerrys signature still accompanies the car today! In February 2018 the E-type specialists at Classic Showcase in Oceanside, California performed a $9,000 service ensuring that this E-type performs as well as it presents. Additional documentation accompanying the Jaguar includes the owners manual, California blue plate, Jaguar Heritage Certificate and more!

This 1969 Jaguar E-Type was listed for sale on 2-3-20 12:45:58. The vehicle color is Opalescent Silver Blue and VIN is 1R7468 . Kindly check ad for seller's location. Seller`s stock ID is danie407301_E-Type. There are 108 other Jaguar cars currently listed for sale on our website. You may desire to see what other Jaguar cars are selling for by visiting our Sales Data page.

Note from the publisher:
Welcome to our collector car marketplace where we feature thousands of classified ad listings of vintage cars for sale. We hope that you will bookmark our site and visit often; our cars are updated every day. Furthermore we encourage you to subscribe to our mailing list so that we may periodically notify you of interesting classic cars that become available.
Home > Classic Cars For Sale > Jaguar > E-Type > 1969 Jaguar E-Type