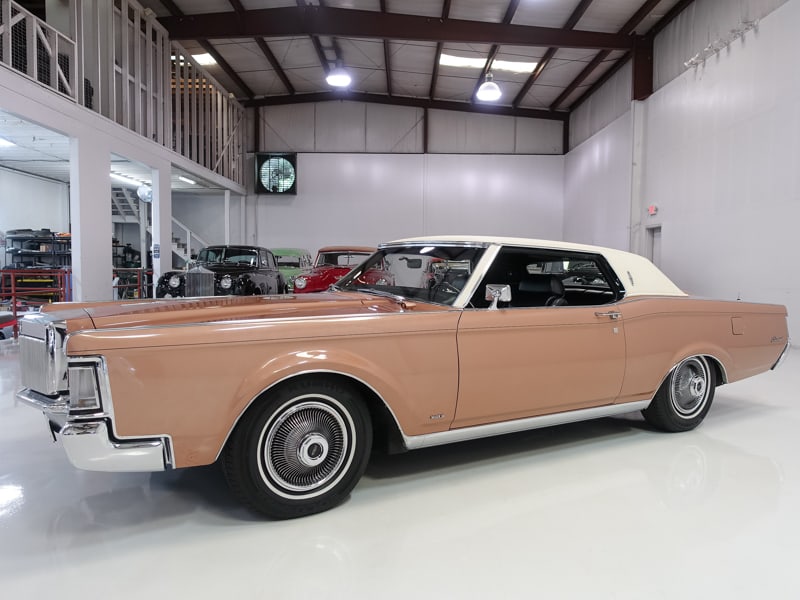 The 1969 Lincoln Continental Mark III featured here is finished in its stunning, factory correct color combination of Light Aurora Copper Metallic over a wonderfully preserved black interior and white textured vinyl roof. This particular example was sold new by Farmer Motor Company in Lexington, Kentucky, to a meticulous owner who took incredible care of his prized Continental. Today, this Lincoln displays only 15,193 miles on the odometer, performs wonderfully and is accompanied by an incredible array of original documentation including the window sticker, original bill of sale, original owners manual, sales brochures and more! We are proud to offer this exceptional 1969 Lincoln Continental Mark III to the most particular collector, investor or enthusiast who appreciates the best the collector car market can offer. Ready to make aninvestment that you can actually enjoy?Classic carshave proven to be among the most resilient and rewarding investments in recent years with the Historic Automobile Group Index (HAGI) jumping 39% in 2013, 16% in 2014 and 17% in 2015 while posting gains of 467% over the last 10 years. Pleasecontactone of our expert sales consultants for more information. They will be happy to give you a complete walk-around, supply you with a more detailed description and answer any questions you may have. Buy with confidence. HISTORY OF THE CONTINENTAL MARK III The Continental Mark III made its market debut in April 1968 as an early 1969 model. Created at the request of Fords Vice President, Lee Iacocca, the Mark III was designed to compete against the newly restyled Cadillac Eldorado. The first Mark series since Mark II production ended in 1957, the Mark III chassis was derived from the Thunderbird and featured new styling that mirrored the Mark II while still paving the shape for future designs and featured a prominent grill similar to that of a Rolls-Royce. Under the long hood was the 460ci V8 that was equipped with a 4-barrel carburetor and was good for 365 horsepower. Lavish luxury and power features were plentiful although automatic climate control air conditioning was available at an additional cost. The Mark III was an instant success with the discerning American public despite its nearly $7,000 dollar price tag. The model was credited as a huge push to the Lincoln division as 1969 was the first year that the Continental outsold the Cadillac Eldorado. Mark III production would end by 1971, though its short production run, iconic style and legendary performance make examples highly sought-after to this day especially if they are in a well-kept, original condition.

This 1969 Lincoln Continental was listed for sale on 5-27-19 09:28:36. The vehicle color is not available and VIN is not available . Kindly check ad for seller's location. Seller`s stock ID is danie407180C_MarkIII. There are other Lincoln cars currently listed for sale on our website. You may desire to see what other Lincoln cars are selling for by visiting our Sales Data page.

Note from the publisher:
Welcome to our collector car marketplace where we feature thousands of classified ad listings of vintage cars for sale. We hope that you will bookmark our site and visit often; our cars are updated every day. Furthermore we encourage you to subscribe to our mailing list so that we may periodically notify you of interesting classic cars that become available.
Home > Classic Cars For Sale > Lincoln > Continental > 1969 Lincoln Continental