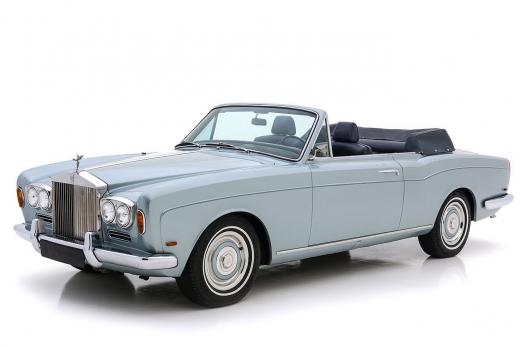 Price: USD $59,500
Thanks to the success of the Silver Cloud and its mechanical twin the Bentley S-Series Rolls-Royce Motorcars experienced a particularly buoyant period in its long history. Earlier efforts to standardize production paid off and the Silver Cloud became the best-selling Rolls-Royce model to date. For its successor Rolls-Royce again tasked engineers with the enormous challenge of replacing the finest motorcar in the world with an even finer one. A primary goal set forth by the directors was to make the new car outwardly smaller but with a roomier and quieter cabin. This directive virtually guaranteed the use of an integral steel unibody design a first for any Rolls-Royce and a decision that drove the final nail in the coffin for many independent coachbuilders. Chief stylist John Polwhele Blatchley again designed the body which was a crisp and modern antithesis to his flowing and baroque Silver Cloud. As with the Mk VI and Cloud series before Pressed Steel Ltd produced the body shells which were in turn hand-assembled in Crewe.Technical innovations included four-wheel independent suspension and four-wheel disc brakes. To achieve the desired ride quality Rolls-Royce employed a high-pressure hydraulic self-leveling system developed by Citroen and licensed for use by RR. The 6.25-litre aluminum-alloy V8 engine used in the Silver Cloud II and III carried over now paired with a three-speed torque converter automatic transmission for export models. Initially the Silver Shadow was only available as a four-door saloon but in 1966 Rolls-Royce put the talents of in-house coachbuilders H.J. Mulliner Park Ward Ltd to good use adding two-door fixed-head and drophead versions. Colloquially known as the Corniche that name did not officially appear until 1971 and these early 2-door models were named for their respective body styles. Production was quite limited with just over 500 dropheads compared to more than 16000 standard saloons. Marque enthusiasts of today covet these rare coachbuilt Shadows for their superb road manners practical usability and classically elegant design.On offer is chassis number DRX 7125 an attractive example of the Mulliner Park Ward Drophead and one of only 16 left-drive chassis produced in 1969. This lovely and extremely well-documented Silver Shadow spent the past forty-six years owned by Max Haechler owner of legendary Arizona imported car dealer Max of Switzerland notable as the first official Rolls-Royce dealer in Arizona. According to factory records the car arrived in the US on the 8th of January 1970 and sold through Rallye Motors Inc. of Glen Cove New York. Originally finished in the attractive combination of Silver Mink over dark blue hides the only option listed on the build sheet is nylon carpet which brought the total list price to a substantial $31820. Mr. Fred B. Wittel of Newark New Jersey was the first owner and he kept it for a short time before selling or trading it later in 1971. The Schoellkopf Card indicates the next owner was the John W. Osborne Co. of Long Beach California although service records suggest the car was based in Denver Colorado. After one further short-term owner (M.T. Heller of Scottsdale AZ) DRX 7125 came into the personal care of Max Haechler. Maxs ownership spanned the next 46 years and a large stack of receipts document its meticulous maintenance nearly all of which performed by factory service technicians in his dealership. Highlights from the history include a photo-documented bare-metal respray by in the original light blue color a new Everflex convertible top and a complete engine rebuild done in Maxs service department. Throughout his tenure Max kept his Rolls-Royce in excellent working order and regularly enjoyed it on the road as a daily driver.Now available after nearly five decades of single ownership DRX 7125 presents in excellent condition thanks to years of attentive care. The paintwork is glossy and attractive the body lines are crisp and the panel fit is excellent albeit with a few minor paint imperfections found on close inspection. The chrome bumpers and brightwork are straight and in excellent original condition. It rides on correct factory steel wheels with color-keyed wheel covers and proper narrow-band whitewall tires. At some point in Maxs ownership he added a Corniche badge to the boot lid presumably to keep the appearance current with the later models offered through his dealership.The original dark blue Connolly hides are in superb condition displaying light creasing and a character that belies the age of the upholstery. Blonde-colored birds eye maple trim provides an attractive accent to the dark blue cabin and the carpets are tidy and neat. There is some light weathering of the woodwork and a later aftermarket AM/FM cassette deck is the only accessory that deviates from stock. The dark blue Everflex top is excellent and electric windows and top mechanism operate as they should. Along with extensive service records the sale includes a complete original tool kit and owners manual with Mulliner Park Ward drophead supplement and service booklet.Records show that Max spared no expense keeping this Rolls-Royce in top running order. In 1994 his factory mechanics performed a complete engine rebuild encompassing new sleeves pistons rods and all other internals. With the engine out mechanics resealed the GM-sourced automatic transmission and tended to numerous other small details. Max carried on driving the car regularly after the overhaul and to this day it performs well with the appealing quality of a well-loved motorcar. The presentation under the bonnet is honest and tidy consistent with being driven and properly maintained.Rolls-Royce produced just 505 MPW Dropheads compared to more than 3200 Corniche Convertibles and many enthusiasts prefer these early models for their rarity and exclusivity. We can think of no better caretaker for such an automobile than an enthusiastic Rolls-Royce dealer like Max Haechler and his four decades of continuous care reflects in this cars inviting character. It is ready for its next long-term custodian and is ideally suited to continued enjoyment in RROC driving events and casual top-down touring.Offers welcome and trades consideredFor additional details please view this listing directly on our website https://hymanltd.com/vehicles/6624-1969-rolls-royce-silver-shadow-mpw-drophead-coupe/

Note from the publisher:
Welcome to our collector car marketplace where we feature thousands of classified ad listings of vintage cars for sale. We hope that you will bookmark our site and visit often; our cars are updated every day. Furthermore we encourage you to subscribe to our mailing list so that we may periodically notify you of interesting classic cars that become available.
Home > Classic Cars For Sale > Rolls-Royce > Silver Shadow MPW > 1969 Rolls-Royce Silver Shadow MPW