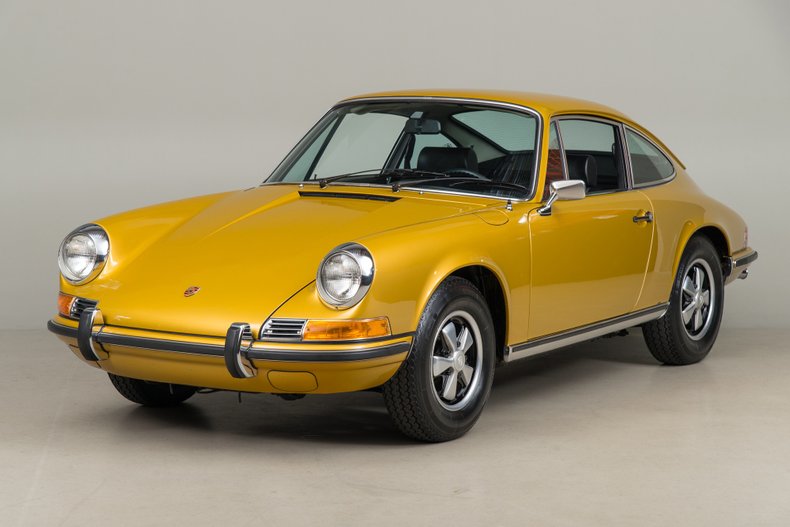 Price: Contact Seller for Price
1971 Porsche 911 T VIN: 9111102451 A very original 911T inside and out 51,882 original miles, matching numbers engine and transmission Owned by the same family for almost 45 years Includes original window sticker, sales paperwork, Porsche Certificate of Authenticity Has all books and tools, also includes service records Completed in July of 1971, this beautiful Porsche 911T was bound for the U.S. market, specd with its rare Gold Metallic paint, front and rear stabilizer bars, a retractable antenna and speaker, its appearance group and tinted glass all around. It was sent to Holberts Porsche Audi, Inc., in Warrington, PA. In 1971, the MSRP for this 911T was $7,289.95, but its first owner would add a few special options to the car at the dealership. Purchasing the car on September 7th, 1971, Max Karl Zoellin of Ottsville, PA would add a Blaupunkt AM-FM Radio and Fuchs Alloy wheels to the tune of an extra $570. According to the original sales invoice he paid a total of $8,243.50 out the door, leaving with an exceptional 911T to be enjoyed for years to come. Enjoying the car thoroughly, Max drove the car quite a bit. Adding most of the miles in the first two years, Max was sure to follow the maintenance schedule and the maintenance booklet has all of the intervals stamped and marked. The 911T was on the move with Max, with paperwork showing the Porsches registration was renewed in Tennessee in April of 1973. In August of 1973 a major service and lubrication was performed with the 911T showing 36,388 miles. After an 11-year period with less than 9,000 miles added, Max had a major service performed in August of 1984 at the same dealership that he purchased the 911T from. In December of 1986 had a valve adjustment done at German Motors of Kingsport, Tennessee. Cherished and well taken care of, the gold 911T would remain with Max and his family for almost 45 years. In 2016 Alex Finigan would purchase the 911T and become the second owner. He took the car to have a sympathetic mechanical refreshing to the tune of $4,754. Shortly afterwards, Paul Hageman purchased the car and became the third owner, marveling at the cars overall originality and stunning gold color. The gold 911T arrived at Canepa and was immediately surveyed, noting that it was in exceptional condition and obviously very well cared for throughout its life. Beginning the Canepa Difference treatment, which includes all cosmetics and mechanicals, the car was completely hand washed underneath revealing the factory finishes. The engine compartment, trunk and interior were all given similar treatment, ensuring all surfaces and materials were cleaned to perfection. The original interior was given extra care, with the original leatherette surfaces gently cleaned along with the original carpets and dashboard. The Gold Metallic paint was polished to an amazing sheen using only foam pads and polish, giving the color such a depth that you can get lost in it. The mechanicals were subjected to the same Canepa scrutiny that ensures the best driving examples, and this 911T was an excellent example and needing very little. A full mechanical comprehensive service was performed, checking and servicing every system that required attention. Palo Alto Speedometer disassembled, cleaned and rebuilt the gauges and calibrated them, the original Fuchs alloy wheels were wrapped with new tires, the hood shocks were replaced, the shifter was adjusted and the windshield washer system was repaired. A new master brake cylinder was installed and the engine surround sheet metal, exhaust manifolds and muffler were restored with factory-spec finishes. Finishing off the mechanicals was a full alignment, resulting in the 911T driving like a long hood dream. With an exceptional single-owner history for 45 years, well optioned from the factory in the stunning Gold Metallic color, along with its wonderful originality, this 911T is ready to be enjoyed and driven wherever

Note from the publisher:
Welcome to our collector car marketplace where we feature thousands of classified ad listings of vintage cars for sale. We hope that you will bookmark our site and visit often; our cars are updated every day. Furthermore we encourage you to subscribe to our mailing list so that we may periodically notify you of interesting classic cars that become available.
Home > Classic Cars For Sale > Porsche > 911 > 1971 Porsche 911