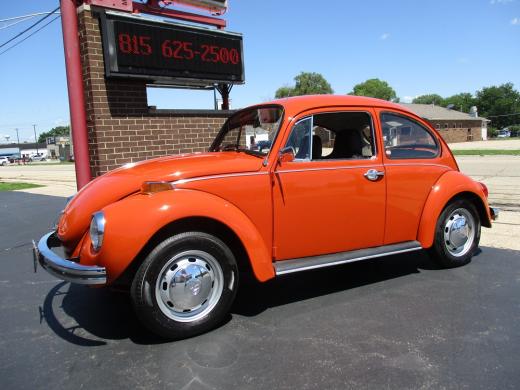 Mileage: 94,295
The Volkswagen Beetle is a two door, rear engine economy car that was manufactured and marketed by Volkswagen from 1938 until 2003. With 21,529,464 produced, the Beetle is the longest running and most manufactured car of a single platform ever made. Although designed in the 1930s civilian Beetles only began to be produced in significant numbers by the end of the 1940s due to World War II. The original 25 hp Beetle was designed for a top speed around 100 km/h. As Autobahn speeds increased in the postwar years, its output was boosted to 36 hp, then 40 hp and in 1970 U.S. models received the 1600cc engine that produced 60hp. In 1971 Volkswagen added the Super Beetle to their line-up which offered 43% more luggage capacity. The large cargo area enabled enough room for the spare to fit in the floor which was accomplished by widening the front end 1.4 and lengthening the frame 2. The Super Beetle also received window trim, running board moldings, a day/night rear view mirror, a horn ring, a map pocket and a locking glove box. This particular example shows 94,295 on the odometer which is believed to be correct. It was repainted in its original color of Bright Orange and the Black vinyl seats were replaced at the same time which was about 7 years ago. During the restoration its original engine and transmission were rebuilt and a new clutch was installed. The restoration has held up incredibly well as the car practically looks new. About a year ago it received an updated electrical system as well as a new stereo with USB input, new speakers mounted in custom kick panels in the footwell, new tires and a new battery. It has been serviced recently and everything is in perfect working order both mechanically and electrically with the exception of the heater which is not currently hooked up. We are asking less than the cost of the restoration so we encourage you not to wait until its too late to call!

Note from the publisher:
Welcome to our collector car marketplace where we feature thousands of classified ad listings of vintage cars for sale. We hope that you will bookmark our site and visit often; our cars are updated every day. Furthermore we encourage you to subscribe to our mailing list so that we may periodically notify you of interesting classic cars that become available.
Home > Classic Cars For Sale > Volkswagen > Super Beetle > 1971 Volkswagen Super Beetle