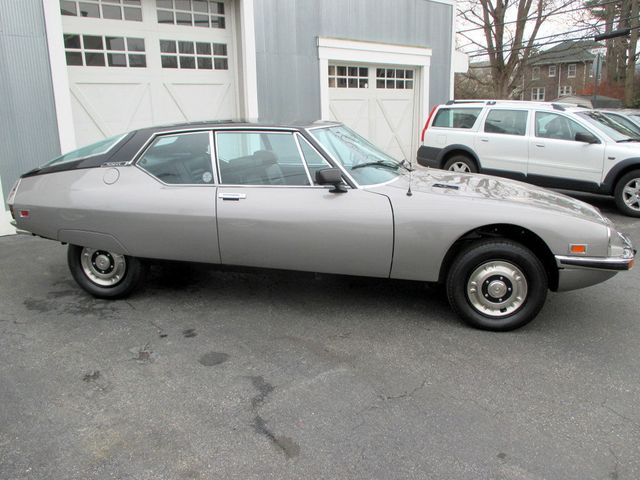 Price: USD $62,500
The Best of France and Italy, our SM was recently restored and finished in highly attractive Gris Nacre with optioned pavillon in Noir and matching Noir (Black) Interior, exuding stately sophistication and quirkiness in keeping with the assortment of clientele it attracted when new. Its unique features and charisma attracted an assortment of buyers, including the Shah of Iran, two members of the Rolling Stones, both Cheech and Chong and Emperor Haile Selassie I of Ethiopia. Interestingly enough, in its time, it was the fastest European front wheel drive automobile the world had ever seen boasting a top speed of 140MPH. Total production of 12,920 of which only 2,400 were originally delivered to the U.S. in 1972-1973. As such, it was quick to impress the automotive press and was the first non-american car to be named Car of the Year by Motor Trend magazine. An orchestra is the work of consummate skill. With so many intricate inputs played from individual bodies, conquering a masterpiece is a tedious process of complete harmonious unity. As if normal automobiles werent complex enough, setting out to deliberately build a vehicle stuffed with unorthodox technological complexities requires a talented mechanical maestro. Luckily for us, the French madmen of Citroen were able to compose the ultimate flagship GT, known simply as: the SM. By the time Citroen debuted the SM at the Geneva Auto Show in 1970, the French marque had been mastering unconventional vehicle technology for decades. With the Traction Avant, 2CV, DS, and other models pocketed in their portfolio, Citroen had already proven to be innovated motoring pioneers. By packing the SM with more ingenuity than any Citroen before it, or any vehicle produced for that matter, its no wonder the model is still revered today. The SM was essentially meant to be a Grand Touring version of the four door DS while doubling as a platform for Citroens newest advancements. Penned by Citroens own head of design, Robert Opron, the overall profile closely mirrors the DSs teardrop canopy with quarter panels covering the rear wheels, but features a Kamm tail assisting in a drag coefficient of just .26-compare that to, say, the Ferrari 458 Italias .33 rating. Love it or hate it, the design is as fresh and striking as it was when new. Like the DS, the SM suspension offered cloud-like comfort thanks to its hydropneumatic (oleo pneumatic) independent fully adjustable self-leveling suspension. The euro-spec SM headlights self-plane in relation to the desired ride height and also swivel in accordance to steering input. -- The SM was an early mass-produced vehicle to offer four-wheel disc brakes. To reduce unsprung mass, the front disc brakes were mounted inboard and cooled by integrated underbody air channels. One of the more intriguing mechanical characteristics is the automated hydraulic pressure bias brake system that self-adjusts to cabin weight distribution to ensure the car doesnt bow under braking, keeping the car level while stopping-all orchestrated through a highly sensitive brake bulb in place of a traditional pedal. The SM also introduced variable assist power steering with only two turns lock-to-lock-like the brakes, steering input is a delicate operation. A timeless automobile of mid-to-late century design, the Citroen SM continues to be a prime example of function blended with form. Hosting a number of mechanical and technological breakthroughs, the SM is the pasts fantasized prediction of the futures automobile-though, in many ways, it seems modern vehicles still cant match the SM. Having acquired Maserati in 1968, Citroen put in an order to the Italian engineers for an appropriate powertrain for the all-around groundbreaking SM-they did not disappoint. Tucked far behind the front axles is an aluminum 2.7-liter 90-degree six-cylinder engine that produces a moderate, but adequate, 170 horsepower-enough for a 140 mph top speed. Fitted with a stainless steel constructed exhaust system, the SM carols a quiet but sophisticated Italian exhaust note. The transmission is mounted in front of the engine and is a fully synchronized 5 speed manual. An elegant and innovative car laden with technology. Its hydro-pneumatic suspension ensured no compromise was needed between this elegant and innovative car laden with technology. Its hydro-pneumatic suspension ensured no compromise was needed between comfort and driving dynamics. Oh, and dont forget that sonorous Maserati V6. The SM is the epitome of cool! And if you have never driven or riden in one..... This is the only car in the world, other than the Citroen DS, that achieves nearly perfect critical damping - an engineering physics term which describes a suspension which absorbs any type/size of bump with nearly zero rebound. The cars extremely large wheel travel range is a big part of its comfort, combined with the hydropneumatic nitrogen gas sphere/strut on each wheel which provides a much more constant spring rate than steel. If you could watch an SM wheel traveling over rough ground, youd swear the wheels move like a running Cheeta - the body never moves, but the wheels follow the ground like theyre on captive rails - following the surface intimately. Many Citroen DS/SM owners enjoy sucking tailgaters hanging on their tail by hitting speedbumps at speeds that would have any other car leaving the ground - its just fun to watch the followers banging off their roofs thru the rear view mirror. Plus - the centerpoint pivot of each front wheel directly thru the vertical center of the tire patch means you could hit roadtrash at high speed without the car being deflected from its path, and thats a very strong safety factor. Very few people have a total comprehension of the genius of this car. Every car has its foibles, yet the SM has outstanding features which are still beyond most modern cars. www.swedishmotors.com Your Dealership Alternative 717.426.2202 x 108 http://www.facebook.com/swedishmotors - Leather Interior Surface - Contact Rich Kushner at 717-426-2202 x101 or Rich@Swedishmotors.com for more information. -

This 1972 Citroen SM was listed for sale on 10-27-18 07:39:02. The vehicle color is Gray and VIN is 00SB5023 . Kindly check ad for seller's location. Seller`s stock ID is swedi18202327. There are other Citroen cars currently listed for sale on our website. You may desire to see what other Citroen cars are selling for by visiting our Sales Data page.

Note from the publisher:
Welcome to our collector car marketplace where we feature thousands of classified ad listings of vintage cars for sale. We hope that you will bookmark our site and visit often; our cars are updated every day. Furthermore we encourage you to subscribe to our mailing list so that we may periodically notify you of interesting classic cars that become available.
Home > Classic Cars For Sale > Citroen > SM > 1972 Citroen SM