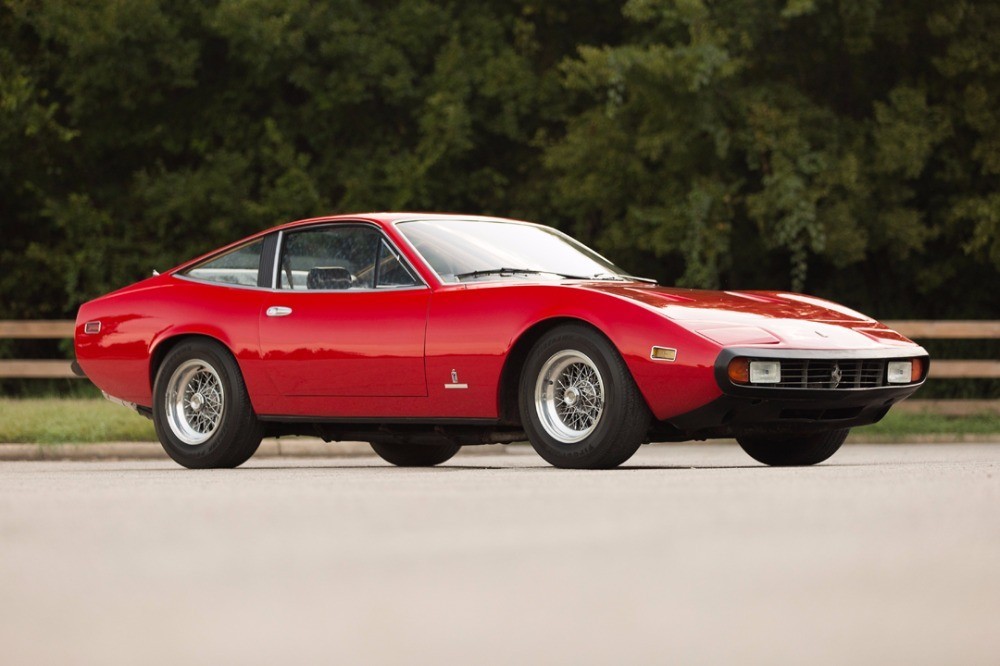 Price: USD $225,000
1972 Ferrari 365GTC/4 CoupeChassis No. 15655One of only 500 units produced from 1971-1972, 45,000 Recorded Miles believed to be Original, Factory Delivered in Rare Oro Kelso (Gold) Paint, Documented with Marcel Massini history report, Great Sounding Engine and Driving Feel!Chassis 15655 was completed in June of 1972 as a U.S. version, LHD, with air conditioning and instruments in miles. The car originally wore Oro Kelso (gold) paint, a rare and unusual color from the Pininfarina special colors chart, over black leather upholstery - Delivered new to official Ferrari dealer Chinetti-Garthwaite in Paoli, PA. The C/4 was under care of the original owner until the very late 1970s, when it exchanged hands and exterior paint color. It subsequently transferred ownerships as recorded through Marcel Massinis history report, ultimately ending up in southern California and New Mexico, now red in color. Presently, the Coupe reads just over 45,000 original miles, which are believed to be original, as is the cabins gorgeous black leather upholstery, glass, trim and accessories. The underside appears nicely detailed and in original condition, along with the engine bay and luggage compartment. An original knockoff spanner resides in the rear compartment. As one of just 500 units produced between 1971 and 1972, this example is offered with known ownership and desirable original colors. A recent service was performed with new distributor, plugs and wire and a compression test was performed with good results of 160 PSI per cylinder.Ferrari 365 GTC/4s are now recognized as an impressive value with lasting appeal. They offer wonderful grand touring capability with the exhilarating performance of the 340-horsepower V-12 engine - a true gentlemans sports car.NEW PRICE: $225,000

This 1972 Ferrari 365GTC/4 was listed for sale on 9-12-17 06:32:44. The vehicle color is Red and VIN is 21491 . Kindly check ad for seller's location. Seller`s stock ID is gullw21491. There are other Ferrari cars currently listed for sale on our website. You may desire to see what other Ferrari cars are selling for by visiting our Sales Data page.

Note from the publisher:
Welcome to our collector car marketplace where we feature thousands of classified ad listings of vintage cars for sale. We hope that you will bookmark our site and visit often; our cars are updated every day. Furthermore we encourage you to subscribe to our mailing list so that we may periodically notify you of interesting classic cars that become available.
Home > Classic Cars For Sale > Ferrari > 365GTC/4 > 1972 Ferrari 365GTC/4