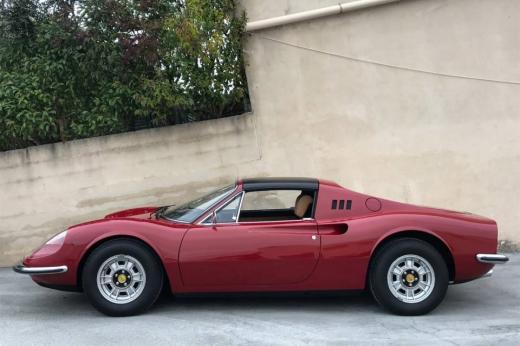 Price: Contact Seller for Price
Sold new by Garage Francorchamps in Belgium to a lady at the end of 1973.
Sold to Christian Philipsen (secretary of the Ferrari club Frannce) in 1975 with 3000 kms.
He kept the car until 1982. The car was always maintained by Ferrari Francorchamps.

The car came back in our premises. Between 2000 and 2012, the engine has totally been rebuilt (invoices and pictures).
We sold the car to a gentleman in 2012 and bought it back (again) in 2018. The previous owner brought the car to a mechanic in the South of France in order to restore and replace some parts.
The interior has been restored as well.

This Dino 246 GTS is like new, in perfect condition. The original interior is beautiful and the engine works perfectly.

This 1973 Ferrari Dino 246 GTS was listed for sale on 6-1-20 07:37:12. The vehicle color is not available and VIN is not available . Kindly check ad for seller's location. Seller`s stock ID is 20SG1073720521. There are other Ferrari cars currently listed for sale on our website. You may desire to see what other Ferrari cars are selling for by visiting our Sales Data page.

Back To Top
Classic car for sale by
GTC SARL

Note from the publisher:
Welcome to our collector car marketplace where we feature thousands of classified ad listings of vintage cars for sale. We hope that you will bookmark our site and visit often; our cars are updated every day. Furthermore we encourage you to subscribe to our mailing list so that we may periodically notify you of interesting classic cars that become available.
Home > Classic Cars For Sale > Ferrari > Dino 246 GTS > 1973 Ferrari Dino 246 GTS