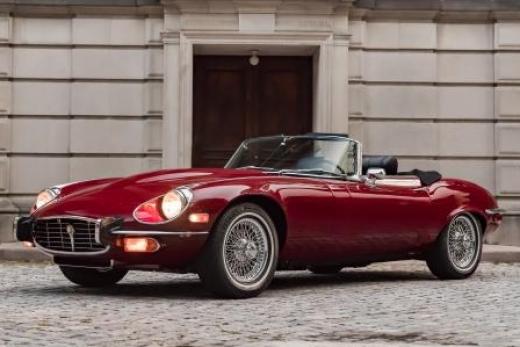 Series III E-Types have a formula, on paper, that would seemingly challenge the likes of Ferrari, Lamborghini and other 12-Cylinder exotic cars of the period. The engine is a racing-derived unit bred for LeMans, there are disc brakes on all four corners and a front-engine 2-seat layout exudes sports car DNA in every way. However, in typical Jaguar fashion, there is a fantastic balance of comfort and performance that leaves the Series III E-Type in its own class, separate and in some instances, above, that of its contemporaries. Powerful, long-legged, luxurious appointments and a refined interior design with performance technology integrated but not obvious. These are the attributes of the last of the great lineage of Jaguar sports cars.

The example on offer here, a 1973 Jaguar E-Type Roadster, Chassis # UD1S21679 per its JDHT Certificate, shows that it was completed December 29th 1972 and was dispatched to British Leyland of New York February 20th 1973. Originally finished as it presents today in Regency Red with Black interior. Anderson Foreign Motors of Woburn, MA originally delivered the car to a Mrs. Linda E. Hogan of Malden, MA on May 24th, 1973. As the story goes the car was cherished, used sparingly and extremely well kept never seeing use in poor weather. Over the years it became accustomed to more storage than use and by the late 1980's early 1990's the car had not seen use in some time. In 1996 the second and current custodian acquired the car from Mrs. Hogan. The mileage at this time was reported to be not much more than approximately 12,600 miles with the car remaining in superb original condition.

Prior to restoration, the car was in original, untouched condition perfect for preservation. As we are told, it exhibited some minor lacquer cracking but was otherwise untouched and original. However, the idea of preserving a cars original condition was not what it is today, and so the owner entrusted the services of Series III E-Type expert, Stew Jones, to carry out a sympathetic restoration. The goal was to take an already excellent example and make it as good as it could possibly be.

The scope of work included a full strip of the paint which revealed absolutely no rust or accident damage of any kind. A repaint was carried out to show quality standards, a partial interior refurbishment of an already near mint original interior was completed, as well as a new top. The restoration also included an entire mechanical restoration to concours quality condition. This included engine rebuild, suspension rebuild, and every single last possible nut, bolt, screw and component treated to proper re-coating, plating, or refinishing. All of the work was completed to the highest possible level right down to the correct clamps, clamp placement, factory inspection markings etcIt is a truly impressive, 100 point car in every respect.

From its restoration completion in 1997 until today, the car has lived in a climate-controlled facility inside a bubble with periodic heat cycles. A mere 400 or so miles have been added in over 20+ years of ownership. Extremely detailed restoration of a highly original example, fanatical care, and the benefits of attention to detail all add up to what is the best Series E-Type we have seen to date. Offered with the sale is the spare, jack, owners manual, JDHT Certificate and a copy of the original title.

Note from the publisher:
Welcome to our collector car marketplace where we feature thousands of classified ad listings of vintage cars for sale. We hope that you will bookmark our site and visit often; our cars are updated every day. Furthermore we encourage you to subscribe to our mailing list so that we may periodically notify you of interesting classic cars that become available.
Home > Classic Cars For Sale > Jaguar > E- Type > 1973 Jaguar E- Type