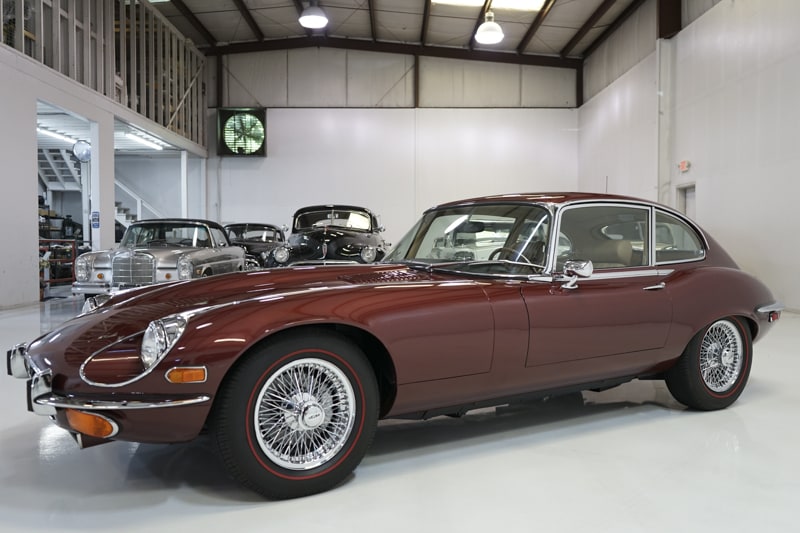 Price: USD $74,900
The stunning 1973 Jaguar E-type Series III 2+2 featured here is finished in the spectacular color combination of Regency Red over a biscuit leather interior. This particular example is one of only 5,182 built for export and was acquired from the estate of a long term owner in Wisconsin who owned the car since the early 1990s. Later it was the recipient of a concours level restoration with meticulous attention to detail throughout that took over a decade to complete! Since restoration the E-type has spent the last several years in a respected private collection. Today the Jaguar presents in spectacular restored condition while a mere 44,269 miles are present on the odometer; which is believed to represent the total mileage accrued since new. The numbers matching 5.3 litre V12 engine performs wonderfully and this restored Jaguar E-type is sure to bring many years of enjoyment to its future caretaker. We are proud to offer this exceptional 1973 Jaguar E-type Series III 2+2 (from the penultimate year of E-type production) to the most astute collector, investor or enthusiast who appreciates the combination of style, elegance and power that is ever present in these classic Jaguars. Classic cars have proven to be among the most resilient and rewarding investments in recent years with the Historic Automobile Group Index (HAGI) jumping 39% in 2013, 16% in 2014 and 17% in 2015 while posting gains of 467% over the last 10 years. Ready to make an investment you can actually enjoy? Pleasecontactone of our expert sales consultants for more information. They will be happy to give you a complete walk-around, supply you with a more detailed description, and answer any questions you may have. Buy with confidence. Arguably the most well recognized sports car of its era, the E-type had a perfect combination of curvaceous lines, high-performance and was priced economically to boot. That helped establish it as an instant hit and its popularity has only grown stronger. The evolution of the E-Type is well documented. The initial 3.8-liter model had a lack of foot well space, uncomfortable seats, massive brake fade and an engine prone to overheating yet it was loved. Ten years and numerous improvements later, Jaguar launched a 5.3 litre V12 engine in its E-Type, transforming it with an infusion of torque and rated at over 270 horsepower! Along with the engine, other more plush modifications were made, including power steering and power brakes. The result was a very fine and quite sophisticated, grand touring car.

Note from the publisher:
Welcome to our collector car marketplace where we feature thousands of classified ad listings of vintage cars for sale. We hope that you will bookmark our site and visit often; our cars are updated every day. Furthermore we encourage you to subscribe to our mailing list so that we may periodically notify you of interesting classic cars that become available.
Home > Classic Cars For Sale > Jaguar > E-Type > 1973 Jaguar E-Type