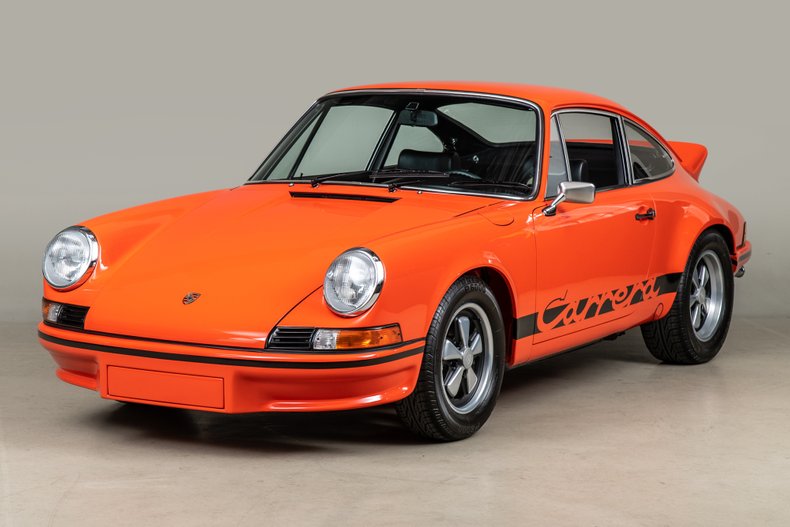 1973 Porsche 911 Carrera RS VIN: 9113600788 Full nut and bolt, concours-quality restoration Matching numbers engine and transmission Porsche factory upgraded to M471 Lightweight specifications 1,477 miles since restoration in 2009 Has Porsche Certificate of Authenticity Includes books, tools, compressor, spare and service documents The Carrera RS is one of the most revered cars in the Porsche lineage, and is regarded as one of the finest sports cars of the 1970s. Revealed at the 1972 Paris Auto Show, it was a factory special built to meet the homologation rules of FIA Group 4 racing. The RS (Rennsport) was almost invincible at Le Mans, Daytona and the Targa Florio, often winning outright against pure racing prototypes. Its not often you would see the same car on the podium one day, and passing you on the open road the next. The RS is conclusive proof that one of Porsches greatest skills was building a car that was immensely competitive at the track, and equally useable as a street car. This Carrera RS was originally built on February 23rd, 1973 and delivered to Porsche Austria in Salzburg whose owner and principal kept the Carrera RS as part of their collection until October of 1974. It was subsequently sold to the owner of Unit Pictures and stayed in his family until February of 1979. Rainer Roth purchased the car who then kept the RS for the next 23 years. After taking possession of the car, Roth decided to convert the M472 touring car to a M471 lightweight. He engaged Porsche Austria GMBH to convert his Carrera RS, using only original (NOS) factory parts, including rare sport lightweight seats, lightweight carpets and door panels, clock plug, etc. Once the conversion was completed, Roth drove the car until November of 1995, when he saw the long-term collectability of the car and put it in storage. In 2002 he parted ways with his beloved RS and made its way to the U.S. that year. The deal was brokered by the author of the definitive book on the Carrera RS, Dr. Georg Konradsheim. In 2009 Gunnar Racing was tasked with doing some work on the RS and ended up performing a full ground up, nut-and-bolt restoration. The car was stripped down to its bare tub, with each of its individual systems and parts taken apart and restored piece by piece using only Porsche parts. The original, numbers matching engine was rebuilt and the matching transmission was serviced. All of its original parts were replated or refinished, along with its gauges restored and interior reupholstered. The RS was painted in its factory original Tangerine orange color, and the decision was made to keep the car in its lightweight trim that it received from the factory in 1979. As with all of Gunnars restorations the work is meticulous and detailed. In December of 2013 Canepa sold the car to its most recent owner who kept it in pristine condition, adding few miles during his ownership. The Carrera RS returned to Canepa in 2019, in the same fantastic condition that it was when it left. The car received a full mechanical inspection and concours-level detailing as part of the Canepa Difference process. With a clean bill of health, the car was washed and its Tangerine orange paint polished to a show finish with a sheen only capable by orange cars. Now offered for sale again, step into this 911 Carrera RS and understand why these cars are rightly held on a pedestal as part of the all-time greats.

Note from the publisher:
Welcome to our collector car marketplace where we feature thousands of classified ad listings of vintage cars for sale. We hope that you will bookmark our site and visit often; our cars are updated every day. Furthermore we encourage you to subscribe to our mailing list so that we may periodically notify you of interesting classic cars that become available.
Home > Classic Cars For Sale > Porsche > 911 > 1973 Porsche 911