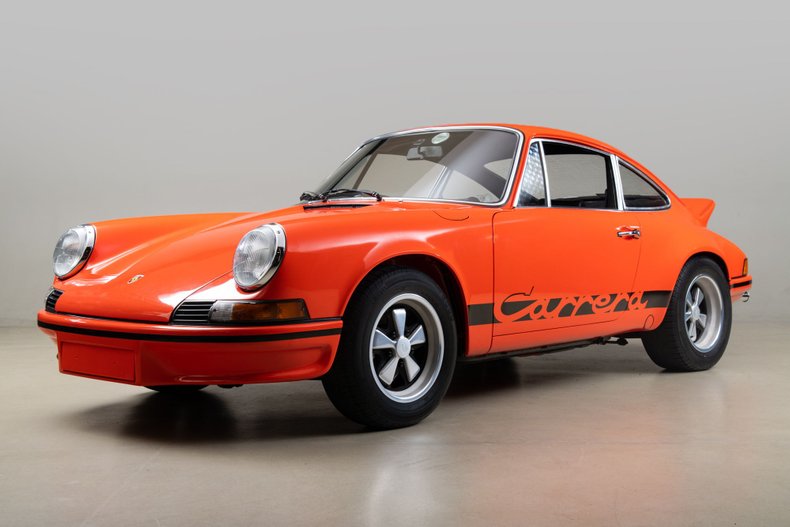 View high resolution photos 1st of only 17 RHD Lightweight produced 1 of 18 Lightweight in 018 Tangerine M471 Lightweight option #342 of 500 first series RS Limited Slip Differential option By the end of 1971, Porsche had achieved tremendous success with its Group 5 917 flat-12-powered sports prototype racer, scoring its first two overall wins at the 24 Hours of Le Mans and asserting dominance over Ferraris 512. But in 1972, the powers that be in European GT racing banned cars over 3.0 liters in displacement from eligibility in the World Championship of Makes. While the 917 would continue to race - and win - in Americas horsepower-crazed Can-Am series (along with the European Interseries), Porsche needed a new championship-eligible car to compete in Europe. The Group 4 class seemed just the ticket, allowing production-based sports cars up to 3.0 liters. Porsche planned to use the 911 as a basis for the new car, but the current road version, even in S trim, fell short of the makings for a Group 4 winner. Porsches solution was the Carrera RS 2.7, but to fall within rules they had to produce 500 units. From the onset, Porsche had concerns that the car would not sell, and as such, many were allocated to senior management as company vehicles. To their surprise demand outpaced supply to the extent that by July 1973 when production ceased, a total of 1,580 were made, easily exceeding the 500 examples required. The Carrera RS has become one of the most revered cars in the Porsche lineage, and is regarded as one of the finest sports cars of the 1970s. Revealed at the 1972 Paris Auto Show, it was a factory-built car to meet the homologation rules of FIA Group 4 racing. The RS (Rennsport) was almost invincible at Le Mans, Daytona, and the Targa Florio, often winning outright against pure racing prototypes. The RS is conclusive proof that one of Porsches greatest skills was building a car that was immensely competitive at the track, and equally desirable as a streetcar. With Porsche only intending to produce 500 Carrera RS examples, making just enough to homologate the cars per the racing rules, the early production 1st series cars are highly coveted, sporting thinner sheet metal from the factory and lightweight in focus, offering a purer experience. However, with the unexpected demand, Porsche would produce 2 more series of the Carrera RS platform, hence the total of 1,580 cars. The original 500 being the now highly collectible series 1 cars, with the later versions, referred to as series 2 and series 3 cars, having thicker sheet metal and being generally heavier than the 1st series cars. Throughout the three series, the Touring version was the most common, and specified for road use, while the limited production M472 Package Lightweight was offered for competition use. This Carrera RS was ordered in early November 1972 by Porsche Cars Great Britain Limited. Optioned to M471 Lightweight specification with a Limited Slip Differential in 018 Tangerine exterior color, with Black interior. Interestingly, this is the first Lightweight car to be manufactured in right-hand-drive, and 1 of only 18 Tangerine M471 models produced for the year. The RS was delivered by Porsche dealer, Dick Lovett Ltd, to a Mr. Gordon on February 10, 1973. From the off, chassis 0342 was used as Porsche intended, and raced competitively in multiple UK rally championships until its retirement in 1980, when it was sold to Jon Daker of Northhamptonshire. In the mid 1980s the 911 RS was purchased by Roger Bray, who would go on to commission a refinishing of the Tangerine paintwork in 1989. After approximately ten years of ownership, Bray would sell the RS to respected Porsche specialists, Autofarm, in Oxford, who would spend the next two years restoring chassis 0342 to its original as-delivered condition. Eventuall