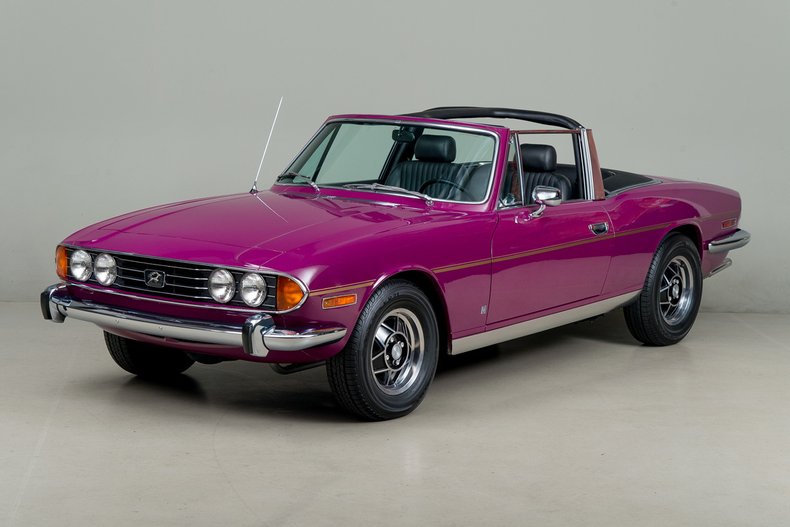 1973 Triumph Stag Mk2 VIN: LE21675U One owner, Byron Webb 100% original, immaculate and unrestored Numbers matching 40,747 miles since new Extensively serviced, mechanical preservation restoration by Canepa Completely concours-show level detailed The true definition of a perfectly preserved time capsule The phrase time capsule is often overused to the point of being somewhat of a clich with those emphasizing the preserved originality of an automobile. With so many cars claiming to be the prime example of their model, there is no wonder to why the phrase has lost its impact. However, once in a rare moon does an automobile truly redefine and set the new gold stand-ard for all others. This 1973 Triumph Stag Mk2 is that car. This Triumph is the most original, concours-quality Stag we have ever seen. It is in literally near-new condition and has recently, in Canepas workshop, undergone a 100% mechanical service/repairs for the ultimate preservation example. The paint, interior, chrome, trim, plastic trim pieces, and even the smallest fasteners are all 100% original and in absolute show-quality condition. This documented one-owner example was purchased new by none other than Byron Webb. He purchased it to be his personal car when his dealership, Webb Motors in Roanoke, VA, was a factory-authorized Triumph dealer. Webb Motors began in the 1940s selling British engines and motorcycles, later moving to Roanoke and selling and repairing British cars. A guru and lover of all things Triumph, Byron had a special place in his heart for the quirky-yet-popular Tri-umph brand. He originally used this Triumph for touring early on, and in the most recent years exercised it only on Sunday morning drives to church, putting the 40,747 miles as original and correct. The Stag spent its entire life in Mr. Webbs climate-controlled garage, or on proud dis-play in his dealerships showroom, never being driven in inclement weather or conditions that were short from perfect. Maintained since new by Mr. Webbs factory-trained mechanics, it presents in stunning condi-tion. Having received meticulous, almost fanatical care and maintenance throughout its life, Mr. Webbs only changes from the original specifications were non-invasive upgrades that in-cluded a dual oil and temperature gauge in place of the original temperature gauge, a Crane XR-700 electronic ignition, and a Rimmer Brothers radiator. Byrons health began to decline and he sadly began the search for a new caretaker for his ma-jestic Stag. Such low mileage cars, no matter how well cared for, always need a good bit of mechanical massaging to get them back to reliable driving spec. Canepa acquired the car and soon began an exhaustive inspection of all its systems and components, pinpointing what needed to be addressed and resolved all of the outstanding points of the car. Some of the ma-jor projects included: rebuilt heads and a full engine seal, brake service, rebuilt carburetors, an A/C service and reseal, front suspension bushings, steering rack rebuild, clutch slave cylinder rebuild, new alternator, and a full engine tune up. This extensive preservation work has been fine-tuned over many years by Canepa expert, revitalizing these types of cars in need of some attention, and bringing the Triumph Stag to 100% mechanical condition. During the course of Canepas lengthy and careful preservation, we discovered that the factory hardtop may have never been removed. When removed from the car, we found the original convertible top resting in pristine, unused condition in its storage compartment behind the rear seats. The original Michelin spare tire still sits in the trunk, along with its original tool roll. All of the evidence points to this being the most original Stag in existence. Only adding to the car was the concours-show level detail carried out by Canepa, putting this British icon is show-winning condition both cosmetically and mechanically. W

Note from the publisher:
Welcome to our collector car marketplace where we feature thousands of classified ad listings of vintage cars for sale. We hope that you will bookmark our site and visit often; our cars are updated every day. Furthermore we encourage you to subscribe to our mailing list so that we may periodically notify you of interesting classic cars that become available.
Home > Classic Cars For Sale > Triumph > Stag > 1973 Triumph Stag