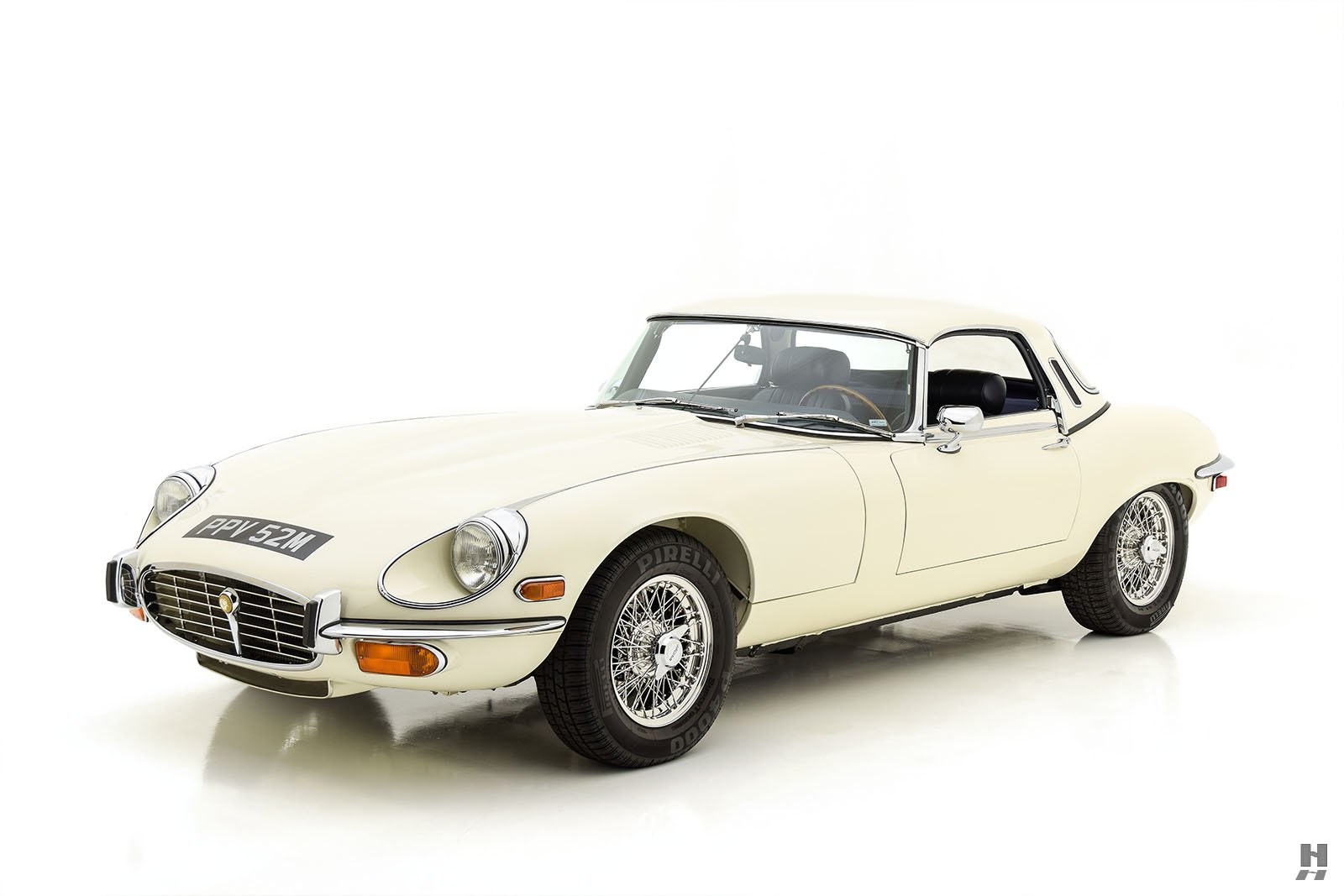 Midway through the 1960s Jaguar engineers kept busy trying to stay ahead of rapidly evolving safety and emissions regulations. Increasingly strict standards particularly in the critical American market saw the power and purity of the original E-Type gradually compromised. Jaguar knew the E-Type could not continue in its original form forever and a comprehensive overhaul was necessary to see the car into the next decade. Coincidentally Jaguar acquired the local engine building firm Coventry Climax and in the deal came former Jag man Walter Wally Hassan who convinced his good mate and fellow engineer Harry Mundy to join him. Mundy designed and developed such legendary engines as the BRM V16 and Coventry Climax FW. Wally Hassan began his long and storied career as an apprentice at Bentley later working for E.R.A. then on to Jaguar where he helped develop the iconic XK inline-six. At Coventry Climax he and Mundy co-developed the incredibly versatile world championship-winning FW (featherweight) engines. With Mundy and Hassan on board Jaguar was in good hands.The first significant product of Mundy and Hassans collaboration was a 5.3 liter all-aluminum single overhead cam V12. The original intention was to use this engine in the new XJ flagship saloon that was set to replace the aging MkII/S-Type. Before it powered the XJ12 however Jaguar adopted the new engine for use in a heavily revised E-Type. Wholly reworked from bumper-to-bumper the E-Type was now available as only a 2+2 coupe or 2-seat roadster with both versions sharing the same lengthened widened tub. The underlying architecture remained the same with independent suspension all around four-wheel disc brakes rack and pinion steering and torsion bars up front. Flared fenders accommodate the wider track which led to an overall flatter lower appearance. Distinctly different yet still instantly recognizable as the E-Type the Series III was a drastic change from the original 3.8 Series 1 although the updates gave the car a new lease on life. With the sublime V12 engine up front the E-Type was transformed from a hairy-chested sports car into a user-friendly comfortable high-speed tourer capable of crushing continental journeys in comfort and style.Remarkable in every respect this beautiful 1974 E-Type V12 is one of the best examples we have encountered fastidiously restored and treated to a host of carefully selected improvements by a Jaguar specialist at the cost of over $200000. This car was sold new in 1974 by British International Motors of Hicksville New York to Mr. C.D. Papadopoulos. After twelve years with the car he sold it to Peter Livanos. A prominent Greek shipping magnate Mr. Livanos is best known for his role as part-owner of Aston Martin in the 1980s. In the late 1990s records show the car was in Texas where it remained until 2008 when it returned to the Northeast. A new owner from England acquired the car in 2009 who immediately handed it over to the Jaguar restoration specialists J.D. Classics (now Woodham-Mortimer) for a complete restoration to J.D. Sport specification.Presented in its original colors of white a matching factory hard top blue cockpit and blue hood this is a positively sparkling example with a marvelous restoration. Upon its arrival at J.D. Classics it was meticulously disassembled and prepared for paint while the engine and mechanical components were simultaneously prepped for a complete overhaul. The body was stripped repaired as needed undersealed and painted inside and out to a very high standard in the original color. Panel fit and alignment is excellent with crisp detailing. Cosmetic updates include attractive slim-line European bumpers eliminating the rather ungainly US-spec overriders. Chrome and exterior fittings are excellent and the headlights uprated to flat-lens H4s for vastly improved visibility. The finishing touch is a set of deep dish high-strength stainless wire wheels with chunky 205/70-15 Pirelli tires for the ideal stance and road presence.Like the body the interior is restored to factory standards but with several select modifications to improve the driving experience. The seats are trimmed using factory correct perforated leather with matching factory-style vinyl materials on the sills panels and door cards. Blue leather covers the dash which features factory instruments and new OE rocker switches. Machined stainless steel knobs replace the fragile factory pieces for the heater controls choke lever and indicator stalk. The under-dash A/C unit is trimmed in leather and equipped with stainless dials that have a distinctly tactile Hi-Fi quality to their action. An earlier E-Type steering wheel sits in place of the original as does a bespoke alloy gear knob. Rounding out the cabin is a vintage-look Becker Mexico stereo that seamlessly incorporates AM/FM radio navigation and digital input functions.The equally impressive mechanical specification backs the stunning cosmetics. The matching numbers V12 is fully rebuilt down to the cylinder liners and equipped with new pistons valves ported heads and much more. Additional features include a J.D. Sport ignition system bespoke sports exhaust and an S.U. Carburetor conversion. The engine pairs with specially-developed J.D. Sport components including the 5-speed gearbox clutch gearshift mechanism and propshaft. The chassis includes updated front brake calipers specially-developed sports adjustable dampers and numerous other refinements that dramatically improve the performance. Every component is beautifully made and seamlessly integrated to give the car a fully-engineered feel. The engine bay is impeccable with factory style fittings blending with the bespoke elements.Documenting the meticulous restoration are hundreds of photographs and a large stack of receipts. It has seen light and careful use since then and it remains in exquisite condition and fine running order. This Jaguar is a marvelous interpretation of the ultimate twelve-cylinder E-Type thoughtfully updated to enhance performance handling and reliability without sacrificing the sublime and refined character that defined the original.

Note from the publisher:
Welcome to our collector car marketplace where we feature thousands of classified ad listings of vintage cars for sale. We hope that you will bookmark our site and visit often; our cars are updated every day. Furthermore we encourage you to subscribe to our mailing list so that we may periodically notify you of interesting classic cars that become available.
Home > Classic Cars For Sale > Jaguar > XKE > 1974 Jaguar XKE