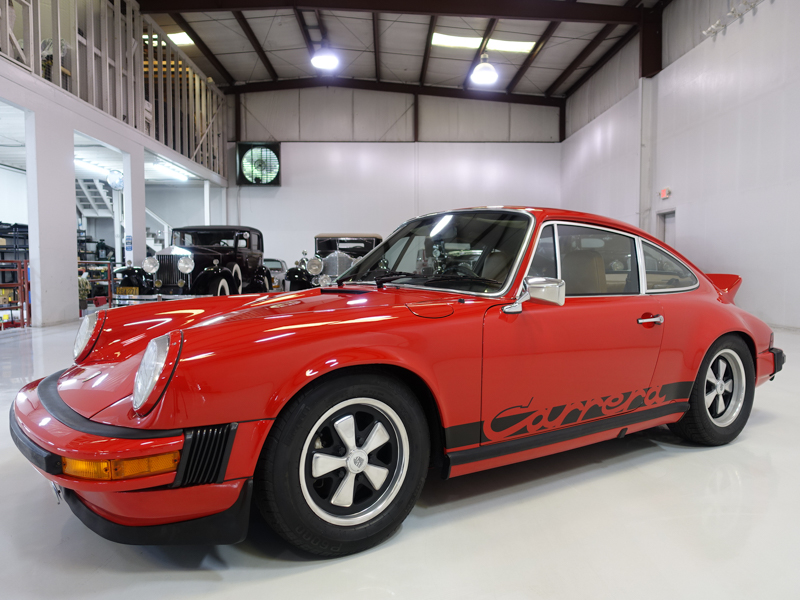 The year 1974 marked a watershed year for the Porsche 911. It was the first year of the new G series, which introduced a strengthened chassis to meet tough new US standards. The inner structure of the tub was reinforced. New impact bumpers with shock absorbers were smoothly integrated front and rear, introducing the new short-hood look, and the doors received new internal bracing to improve side-impact resistance. The revised front trunk space now contained a single battery and a collapsible spare tire nestled into its 21-gallon fuel tank. To meet US emissions requirements, US-specification Carreras used the same 175-horsepower engine with K-Jetronic fuel injection as the 911 S rather than the mechanically fuel-injected engine from the 1973 Carrera RS. That said, the new Carrera was still a muscular and good-looking machine, with flared fenders, wider wheels, and that iconic ducktail on the engine cover. It was also a stout performer, capable of reaching 60 mph from a standing start in just 6.5 seconds and topping out at 142 mph. The stunning 1974 Porsche 911 Carrera Coupe featured here is finished in stunning Guards Red over a rich saddle interior and is accented by black Carrera script decals along both sides. According to the accompanying copy of the Porsche Certificate of Authenticity this example was completed in November 1973. This first production year 911 Carrera is one of only 528 assembled for the U.S. market and was reputedly sold new in the Northeastern United States. In 2016 it was released from over 30 years of long-term ownership and most recently, the numbers matching 2.7 liter engine was subjected to a major service including upgraded chain tensioners. This January 2019 service invoice totals more than $19,000 while an astounding number of invoices that date back to 1981 also accompany the car. With incredible documentation, matching numbers status, stunning colors and incredible documentation this 911 Carrera Coupe is now ready to be driven and enjoyed and will certainly bring many years of enjoyment to its future caretaker. We are proud to offer this first production year 1974 Porsche 911 Carrera Coupe to the most particular investor, collector or enthusiast who appreciates the performance and legacy of this legendary sports car model. Classic carshave proven to be among the most resilient and rewarding investments in recent years with the Historic Automobile Group Index (HAGI) jumping 39% in 2013, 16% in 2014 and 17% in 2015 while posting gains of 467% over the last 10 years. Ready to make aninvestment that you can actually enjoy?Pleasecontactone of our expert sales consultants for more information. They will be happy to give you a complete walk-around, supply you with a more detailed description and answer any questions you may have. Buy with confidence.

This 1974 Porsche 911 was listed for sale on 10-14-19 06:36:59. The vehicle color is not available and VIN is not available . Kindly check ad for seller's location. Seller`s stock ID is danie407255_911. There are 159 other Porsche cars currently listed for sale on our website. You may desire to see what other Porsche cars are selling for by visiting our Sales Data page.

Note from the publisher:
Welcome to our collector car marketplace where we feature thousands of classified ad listings of vintage cars for sale. We hope that you will bookmark our site and visit often; our cars are updated every day. Furthermore we encourage you to subscribe to our mailing list so that we may periodically notify you of interesting classic cars that become available.
Home > Classic Cars For Sale > Porsche > 911 > 1974 Porsche 911