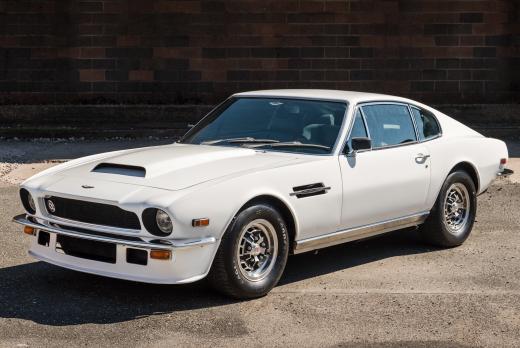 The engine displacement boom of the late 60s and early 70s left no manufacturer untouched. Buyers worldwide began demanding more displacement for their dollar and even stoic brands such as Aston Martin were forced to concede or face the wrath of the buyer. Coming off their wildly successful and drop dead gorgeous DB 5 and 6 series of cars, Aston Martin introduced the DBS in 1967 with a much more modern and muscle car inspired design. Unfortunately, though, the much desired V8 engine was not ready for production just yet, so the car was built utilizing the tried and true inline 6. In late 1969 the new V8 was finally ready and introduced to the world as the flagship of the Aston lineup, the DBS V8. At the time of its introduction, it was the fastest 4 seater production car in the world. In 1969 the DBS and its aging 6-cylinder were dropped from the lineup which meant the DBS V8 now became just the Aston Martin V8. Cars produced from May 1972 to July 1973 were referred to as series 2 cars and featured a finicky Bosch fuel injection. In 1973 Aston decided to switch back to Weber carburetors for the series 3 cars which lasted throughout 1978. Visually the cars received a taller hood scoop to accommodate the Webers as well as to add an even more muscly presence to the already macho lines of the vehicle. Adding the carburetors back to equation meant the V8 produced 310 horsepower and had a 0-60 time of 5.7 seconds with the ZF 5-speed fitted. For 1976, emissions equipment, unfortunately, choked the power figures back to 288 horsepower. A total of only 967 V8s were produced over the series 3 run. The Aston Martin V8 would see two more series over an 11 year period, with a number of visual and mechanical changes implemented, before the iconic series of cars was replaced by the Virage in 1989.

The example on offer here, chassis number V811430LCA and engine number V5401430LCA, is a 1976 model year Aston Martin V8. It is a matching numbers example per the included BMIHT certificate and build sheet. It was optioned from new with both a 5-Speed manual transmission and air conditioning. The car was originally delivered in Ascot Grey with a Burgundy interior although it now wears an elegant White over Grey color combo. It is believed that the repaint of the car may have been done either by the factory or very shortly after the car was completed as there are no signs of the previous color to be found on the car. This V8 was shipped on 5/27/1976 to the US distributor. From here the car spent a good portion of its life in California before being sold to an Aston Martin collector in Florida. It is believed that sometime during one of these ownerships that the car was repainted again in the white color it currently wears as the finish it currently wears is in very nice condition per the age. In the early 2000s, the car was traded to Steel Wings towards an automatic version. It was at this time that the current owner and consignor, who was both an employee at Steel Wings and an AMOC member, purchased the car. The current owner has cared for the car extremely well and driven it both carefully and sparingly during his ownership. Most recently, in January of 2019, the car received a thorough servicing by Steel Wings with a total of $8475 spent to bring the car up to excellent mechanical condition. Full receipts for this servicing can be seen above in the documents section. Given its careful and enthusiastic ownership and its recent servicing, this car needs nothing and is ready to be thoroughly driven, shown and enjoyed.

Note from the publisher:
Welcome to our collector car marketplace where we feature thousands of classified ad listings of vintage cars for sale. We hope that you will bookmark our site and visit often; our cars are updated every day. Furthermore we encourage you to subscribe to our mailing list so that we may periodically notify you of interesting classic cars that become available.
Home > Classic Cars For Sale > Aston Martin > V8 > 1976 Aston Martin V8