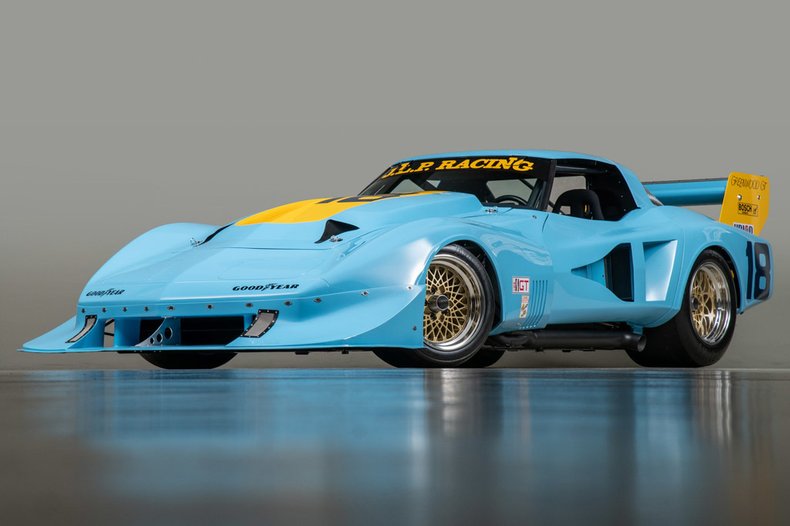 The most powerful and brutal racing Corvette ever designed.

One of only 2 tube frame Corvette chassis built Designed by Bob Riley, chassis built by Charlie Selix and Gary Pratt (later Pratt and Miller) Aluminum big-block V8 engine with 750+ horsepower Concours-level restoration by Canepa to 1978 specifications Raced by John Paul Sr. of JLP Racing Porsche 935 magnesium brake calipers Historic IMSA GTX eligible With big-block power, visually striking bodywork and with the performance characteristics (and noise) of a rocket ship, IMSA Corvettes were some of the loudest, brash and powerful cars to ever run in the series. This Greenwood Supervette, driven by the now infamous John Paul Sr. (JLP Racing), is one of two tube-frame chassis ever built, and was one of the fastest cars in IMSA and a constant threat to its competition. Fully restored by Canepa to its 1978 IMSA specifications, this aluminum big-block tube-frame bruiser designed and built by the pre-Protofab team is the ultimate expression of an IMSA Corvette. In 1976, the IMSA sanctioning body changed the rules of road racing to allow full tube frame cars to compete in the premier North American Road Racing series. John Greenwood saw a major opportunity to design and build the next generation of racing Corvettes. Designer Bob Riley would engineer the first Greenwood tube frame Corvette, built and entered into competition for the first time in 1977. This Corvette, COV002, is the second and final chassis ever created, designed by Riley and built by the team that would become Protofab. These tube-frame monsters were no ordinarily-built race cars. The Riley-designed cages and chassis were quite innovative, calling for large and expensive 2 chrome-moly tubing, using extensive triangulation for extreme strength. Chrome-moly, though expensive, is both lighter and stronger than mild steel, which paid major dividends with the completed design. The result was extremely strong and rigid frames that were built to tank-like strength. With several seasons of racing a Porsche Carrera RSR now under John Paul Sr.s belt, he was looking to upgrade in a major way and a mega horsepower tube-frame Corvette by Greenwood fit his bill. During the off season between 1977 and 1978, John Paul bought the second tube frame Corvette from the Protofab team after talking with John Greenwood about the potential of the Corvette package. Shortly afterwards, JLP Racing picked up the Riley-designed chassis in Michigan and assembled the car in Lawrenceville, Georgia were JLP Racing housed its home base. In an effort to reduce drag and increase top speed, the design of 002 was changed from the first car and was built with a narrower track and more aerodynamic bodywork, created by John Greenwoods team. John Pauls Corvette was prepped in his own shop and didnt use the Greenwood powerplants. Instead, he used the big-block all aluminum engines from one of the most recognizable names from Can-Am racing and in power numbers, Don Nichols of Shadow Racing. These bullet-proof aluminum big blocks, left over from the Can-Am days, were built by Lee Muir and reportedly had over 800lb/ft of torque on Shadows engine dynos. Armed with Kinsler mechanical fuel injection, the all-aluminum V8 engine was a horsepower monster, extremely capable and often pushing above the 750+ figure. This extra bit of power along with an extremely capable chassis made this Corvette a constant threat to the other competition on the track. John Paul drove the car in the 1978 IMSA season, the first race being Road Atlanta, competing for overall wins in the premier GTX category. Ongoing research and development were constantly being performed due to the Porsche 935s dominance at the time and the target to beat. John Paul had his

Note from the publisher:
Welcome to our collector car marketplace where we feature thousands of classified ad listings of vintage cars for sale. We hope that you will bookmark our site and visit often; our cars are updated every day. Furthermore we encourage you to subscribe to our mailing list so that we may periodically notify you of interesting classic cars that become available.
Home > Classic Cars For Sale > Chevrolet > Corvette > 1977 Chevrolet Corvette