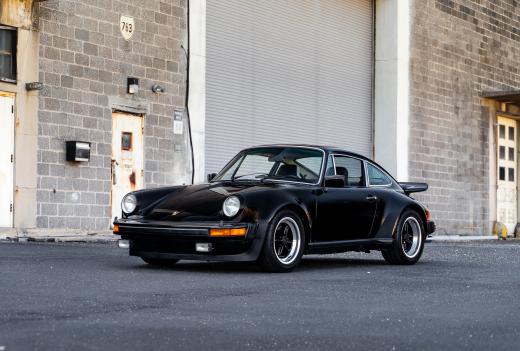 As a company, Porsche has always been on a quest to make their cars go faster, both on the track and on the road. This quest for speed is exactly what led them to begin experimenting with turbocharging technology in the late 60's. In order to meet FIA homologation rulings, Porsche put the 911 Turbo into production and introduced the vehicle at the Paris Auto Show in October of 1974. Taking the turbo technology from their 917/930 cars and mating it to 3.0 liter flat-6 from the Carrera RS was a recipe for success and soon had consumers hooked. Excitement for the car was great enough that Porsche decided to keep the car in production even after the homologation requirements had been met, leading to the awesome lineage of forced induction 911s that still remains to this day.

The car on offer here, a 1977 Porsche Turbo Carrera, chassis number 9307800235 and engine number 6870231, is a fantastic example, finished in original colors and featuring a well preserved original interior. Currently, the odometer shows just 57,762 miles. According to the limited copies of documents we have with the car, it appears to have been delivered new to Chick Iverson Porsche of Newport Beach, California. The car spent a good portion of its life in California, ending up in Palm Springs until 1985 when it moved to Wyoming. The car then ended up in South Dakota, at which point we have copies of receipts for close to $50,000 of receipts for a mechanical restoration done in 2016. The restoration was very thorough and covered a complete engine rebuild, transmission rebuild, front and rear suspension rebuild and more. When we acquired the car in July of 2018 it still wore what we believed to be original paint but it was unfortunately failing and we considered it to far gone to be preserved. We had the car professionally, glass out, repainted in its original color but kept the well preserved original interior intact. Between the mechanical restoration and the repaint in original colors, there is not too much else this car currently needs and it would make an ideal car to drive and enjoy or with a few minor fixes would be an excellent candidate for showing.

Note from the publisher:
Welcome to our collector car marketplace where we feature thousands of classified ad listings of vintage cars for sale. We hope that you will bookmark our site and visit often; our cars are updated every day. Furthermore we encourage you to subscribe to our mailing list so that we may periodically notify you of interesting classic cars that become available.
Home > Classic Cars For Sale > Porsche > 930 Turbo > 1977 Porsche 930 Turbo