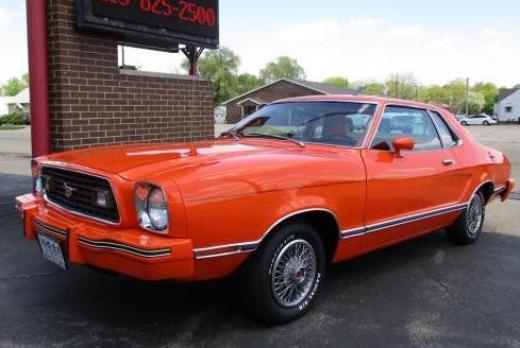 Mileage: 17,572
The 2nd generation Ford Mustang, marketed as the Mustang II, is a front engine, rear wheel drive pony car manufactured in coupe and hatchback body styles. Introduced in September 1973 for model year 1974 the Mustang II was 490 pounds lighter and almost 19 inches shorter than the 1973 Mustang. Iacocca expected a high level of fit and finish, wanting the car to be "a little jewel". A 2009 report confirmed Iacocca's vision for the 19741978 Mustang II, saying it "was the right car at the right time, selling more than 1 million units in four years." The second generation Mustang was introduced in response to a growing demand for smaller, less extravagant cars during the embargo-induced fuel crisis of the 1970s. This 2 door hardtop is a one owner car with 17,572 original miles. It was optioned with Tangerine paint, a Plaid Tangerine interior, the 2.3L 4 cylinder engine, a 4-speed manual transmission, A/C (not working), color keyed seatbelts, a Flip-Up Open Air Roof, color keyed left hand sport mirror, and an AM Radio. It was professionally repainted about 20 years ago in its original color which still shows incredibly today. It has been garage kept and pampered since the day it was sold new and is likely the nicest Mustang II on the market. Considering its owner history, low miles and overall condition it is priced very fairly so if you like what you see you better call us before someone else beats you to it!

Note from the publisher:
Welcome to our collector car marketplace where we feature thousands of classified ad listings of vintage cars for sale. We hope that you will bookmark our site and visit often; our cars are updated every day. Furthermore we encourage you to subscribe to our mailing list so that we may periodically notify you of interesting classic cars that become available.
Home > Classic Cars For Sale > Ford > Mustang > 1978 Ford Mustang