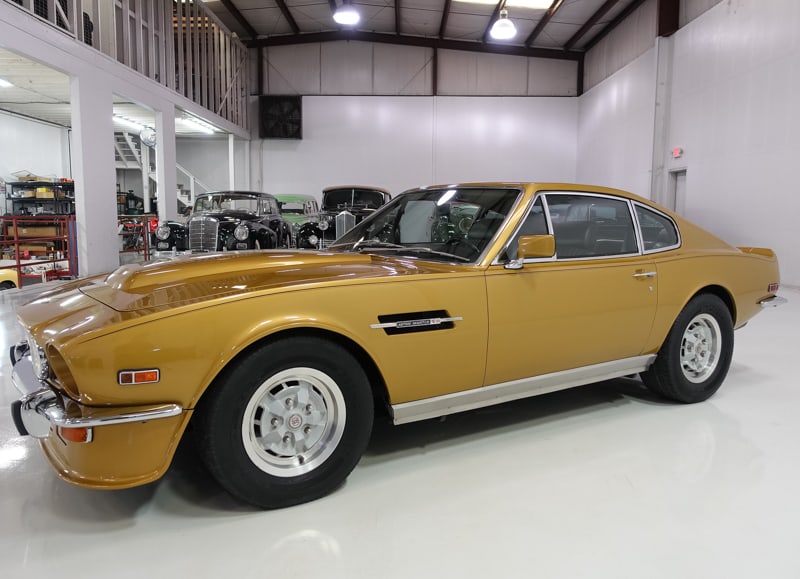 Price: USD $239,900
In February 1977, Aston Martin unveiled the new Vantage with V8 power. The name was previously used on upgraded Aston Martins dating back to the DB2, however the new V8 Vantage pushed the industry forward as the first production car with a capable top speed of 170mph. Considered to be the first true British Supercar, the V8 Vantage had a classic GT layout seating up to four. Powered by the same master work 5.3 litre DOHC V8 that was fitted in the Lagonda, the Vantage V8 was tuned with higher duration camshafts, larger valves, and an increased compression ratio. Fed by four Weber 48 IDF carburetors, in Euro specification form the Vantage V8 pushed nearly 400 horsepower! Style was based on the Aston Martin V8 with several aerodynamic aesthetic touches including a solid front air dam with twin CIBIE lights while a front spoiler to draw in air to the radiator. The famous Flip Tail spoiler was bolted onto the first 16 cars, and became an integrated part of the body work after. Assembled by hand in Aston Martins legendary tradition, the V8 Vantage was praised by the automotive press upon its release. Several publications noted that the V8 Vantage outperformed other great marques including the Lamborghini Countach, the Ferrari 512BB and the Porsche 930. Only 42 of the Molded Flip Tail cars were assembled from 1977-1978 and of those, only 11 were sold new in the United States. A coveted model by collectors seeking a mixture of performance, style and luxury that could only come from Aston Martin, the V8 Vantage is one of the most desirable British sports cars the world has ever known. Finished in stunning Aztec Gold over a gorgeous original Sable brown leather interior, this incredible Aston Martin V8 Vantage Flip Tail Coupe is one of the rarest Aston Martins available on the market today. Only 11 examples were assembled for the U.S. market and this example was originally delivered to an Aston Martin Dealer in the Eastern United States where it has spent the majority of its life. This V8 Vantage is tuned to Euro specifications with approximately 400hp. It comes equipped with many desirable options including factory air conditioning, a ZF 5-speed manual gearbox, power windows, power mirrors, 4-wheel disc brakes and more. Accompanying this investment-grade Aston Martin V8 Vantage Flip Tail Coupe is its Heritage Trust Certificate, owners manual and a record from its recent servicing. Were proud to offer what we believe to be one of the best examples of this extremely rare British classic to the most astute collector or investor who desires the best. Ready to make an investment that you can actually enjoy? Classic cars have proven to be among the most resilient and rewarding investments in recent years with the Historic Automobile Group Index (HAGI) jumping 39% in 2013, 16% in 2014 and 17% in 2015 while posting gains of 467% over the last 10 years. Please contact one of our expert sales consultants for more information. They will be happy to give you a complete walk-around, supply you with a more detailed description and answer any questions you may have. Buy with confidence.

Note from the publisher:
Welcome to our collector car marketplace where we feature thousands of classified ad listings of vintage cars for sale. We hope that you will bookmark our site and visit often; our cars are updated every day. Furthermore we encourage you to subscribe to our mailing list so that we may periodically notify you of interesting classic cars that become available.
Home > Classic Cars For Sale > Aston Martin > Vantage > 1979 Aston Martin Vantage