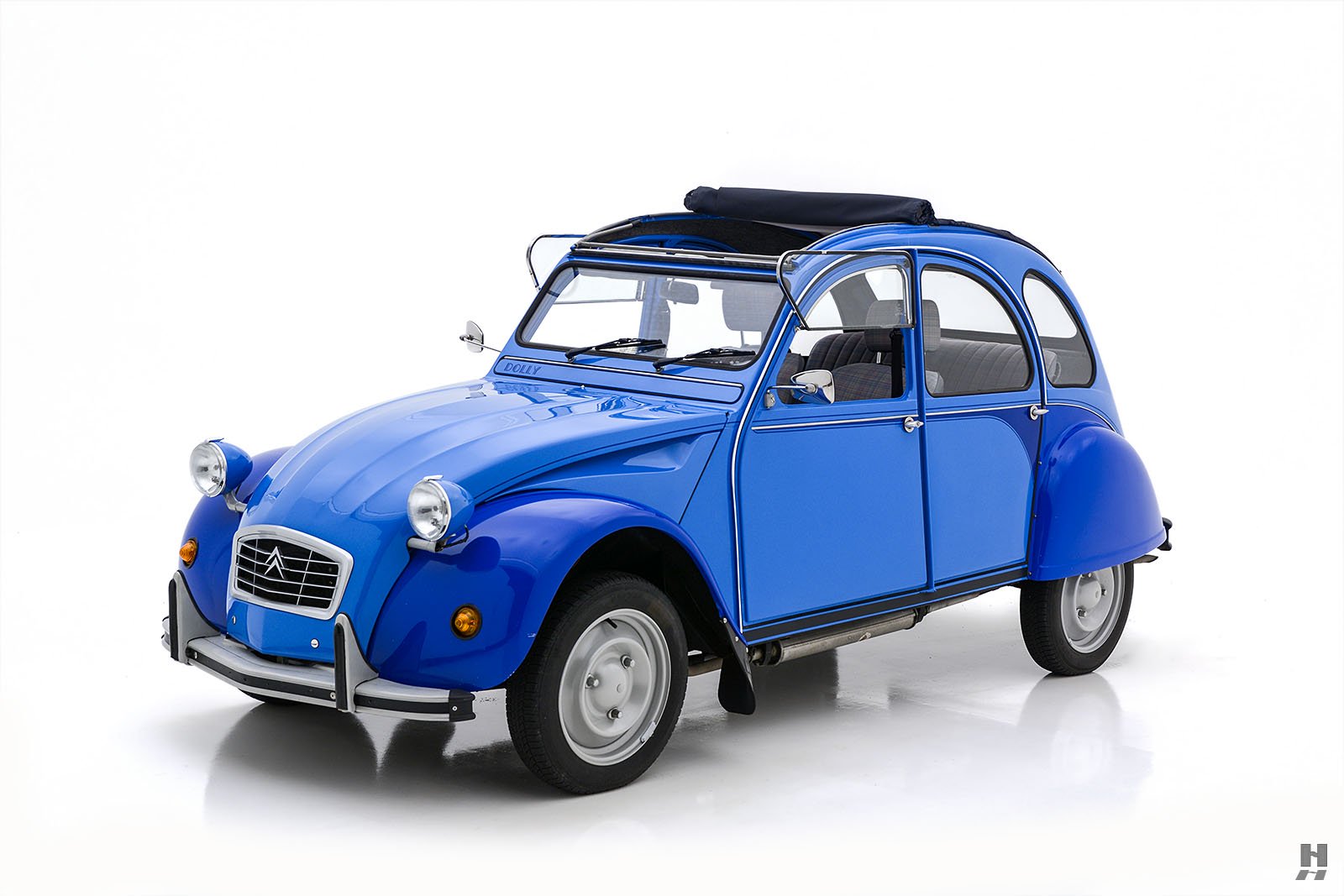 Not long before the outbreak of war in Europe a tiny plucky little Citroen that would go on to greatness as an icon of French culture began its gestation. In 1935 Citroen faced bankruptcy from the costly development of the Traction Avant and to make matters worse patriarch Andre Citroen suddenly died that same year. The receivers appointed control over the firm to its largest creditor Michelin. Given Citroens fragile financial state a cheap small mass-market car was the ideal solution to shore up the bottom line. Citroens tiny two-cylinder machine was initially called the TPV or Toute Petite Voiture (Very Small Car). The purpose of the TPV was very much the same as Henrys Model T: To bring cheap essential reliable motorized transport to even the most rural areas of France.The new Vice President and Chief of Engineering Pierre-Jules Boulanger assembled the brilliant duo of Andre Lefebvre and Flaminio Bertoni to design the TPV. Boulangers vision was that of an umbrella on wheels with at least two seats the ability to haul 50 kilograms of potatoes or a small cask of wine (naturally) all while being supple enough to carry a basket of eggs safely across a plowed field.Development began in earnest but the war and subsequent occupation meant engineers had to continue their work in secrecy. Finally at the 1948 Paris Auto Salon the new 2CV made its debut. Named for its taxable horsepower rating (with a nod to the two horses it could replace on a farm) the Deux Chevaux gained a few luxuries over the TPV such as a second headlight padded seats glass and a heater. The makeup consisted of a ladder chassis horizontally opposed air-cooled two-cylinder engine front-wheel drive and an ingenious long-travel suspension system with passive self-leveling. The body was simple and practical in purpose but with a whimsical charm and typically French wink-and-a-nod sense of humor. The Tin Snail (nicknamed for the looks as much as the performance) is a serious car that didnt take itself too seriously. The buying public adored it and Citroen sold nearly nine million examples of the 2CV and its variants over an incredible 42-year production run. This humble little car stands as a proud symbol of French innovation and creativity.Throughout the 2CVs four decades in production Citroen worked to keep it fresh and attractive to new buyers. A wide array of unique versions appeared with distinct paint and graphics. These included the Cocorico celebrating Frances 1986 football World Cup effort and the downright silly Sauss-Ente finished in bright green with a lurid cartoon duck on the flanks. Best known among the specials is the Charleston with its two-tone colors inspired by the Traction Avant of the 1930s. Closely following the Charleston in terms of popularity is the Dolly marketed to female buyers who made up over 40% of 2CV buyers. The Dolly offered several two-tone color schemes with unique graphics and interior trim. Buyers responded with delight and the Dolly soon became one of the best-selling 2CV variants topping sales charts in both the UK and in Germany.Presented in a cheerful two-tone blue livery this 1979 2CV benefits from a complete restoration by marque expert Axel Kaliske of 2CVs R Us in Seattle Washington. Mr. Kaliske is a respected authority on 2CVs and he has lovingly restored many examples through the years. This 1979 2CV originated in Germany and the sale includes German registration documents. It was there where the body and underpinnings were professionally restored updating it to Dolly specification in the process. An accompanying photo album shows the car stripped down to a bare chassis and painstakingly restored from the ground up. The comprehensive restoration included a new interior and a rebuilt detailed 2-cylinder engine done by Kaliske in his Seattle workshop.According to the history file 2CVs R Us sold the Dolly in 2006 shortly after its restoration. The new owners have regularly enjoyed and maintained it in superb order over the past thirteen years. Today this 2CV presents in excellent condition showing some signs of light use and enjoyment through its gently mellowed restoration. The distinctive two-tone blue paintwork is beautiful and finished to a standard rarely seen on restored 2CVs. Body fit and finish are up to factory standards with period-correct bumpers and trim. Details include the original jack an accessory grille cover for cold-weather driving and the signature roll-up full-length sunroof.The splendid interior features plaid fabric upholstery with period-correct switchgear and controls. The cockpit is refreshingly minimalist with flip-up side windows and only the bare necessities of driving. Interior plastics are in excellent condition with no signs of cracking or excessive wear. Driving a 2CV is a pure delight with the push-pull action shift lever sprouting from the center of the dash single spoke wheel and the distinct putter from the air-cooled twin. The little 602 cc engine fires to life readily feeling eager and sprightly despite the decidedly modest output. The brilliant suspension design is quite unlike any other car on the planet delivering a supple ride and respectable handling despite the alarming roll angles.The 2CV served a fundamental purpose of getting motorized transport to all people of France. The great motoring journalist L.J.K. Setright put it best when he described the 2CV as the most intelligent application of minimalism ever to succeed as a car. It did so with a typically French joie de vivre and a sense of humor that endeared the 2CV into the hearts of millions. This delightful and wonderfully restored example is sure to provide its next keeper with years of happy motoring.Offers welcome and trades considered

Note from the publisher:
Welcome to our collector car marketplace where we feature thousands of classified ad listings of vintage cars for sale. We hope that you will bookmark our site and visit often; our cars are updated every day. Furthermore we encourage you to subscribe to our mailing list so that we may periodically notify you of interesting classic cars that become available.
Home > Classic Cars For Sale > Citroen > 2CV > 1979 Citroen 2CV