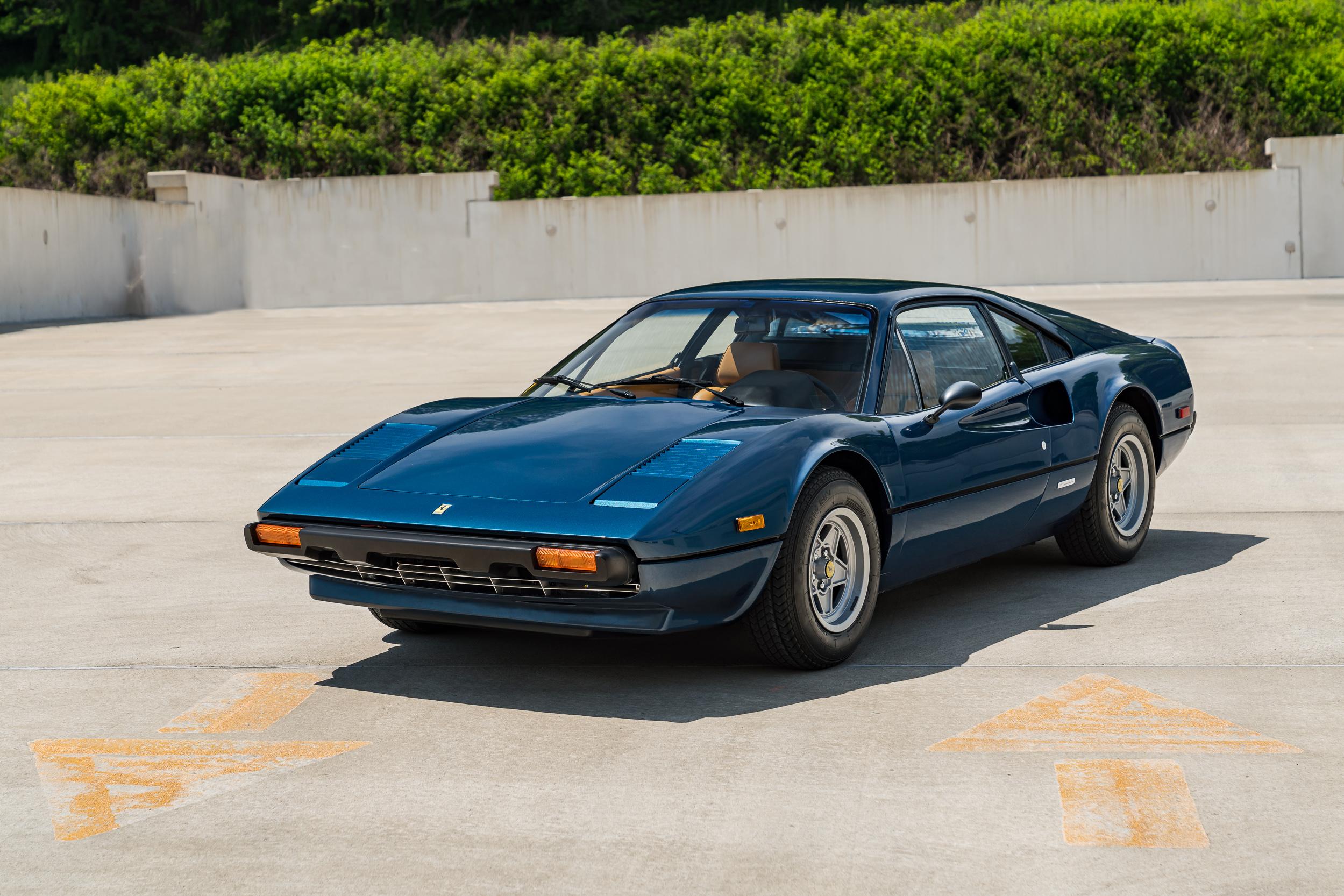 The Pininfarina designed Ferrari 308 GTB was introduced in 1975 at the Paris Auto Salon. It took all that was great about the car it succeeded, the 246 Dino, and amplified power output with a 3.0L V-8 at the heart of its mid-engined, wedge-shaped body. The first production run of 808 cars utilized a Fiberglass body which gave way to a steel body in June of 1977 after customer criticism that Ferrari was using a substandard material (Plastic) for their bodies. U.S. Specification examples utilized a wet-sump lubrication system and were fitted with a different bumper design than European spec examples. All early 308s featured twin-choke Weber 40DCNF carburetors from 1975-1979 after which, Ferrari introduced the Bosch Mechanical Fuel Injected examples. The early-carbureted examples are widely regarded as the best sounding with the GTB variants having the cleanest look with superior handling over the GTS. In the hierarchy of collectability, the early Carbureted, steel-bodied GTB remains as the most sought-after examples behind the extremely rare Vetroresina (Fiberglass) bodied cars. In total, approximately 2,993 carbureted 308 GTBs were produced in what may seemingly be a large figure comparative to early Ferrari production numbers. However, many of these examples lived difficult lives especially at a time when these cars were relatively inexpensive making them targets for owners that lacked a level of care required. Today, collector-quality examples are extremely hard to come by which leads us to the fine example we are offering here.

The car we have available here is a June 1979 production, carbureted GTB, Chassis # 28609 fitted with its original engine # 01336 showing 57,934 mile from new. It is one of the rare examples finished in a color other than the traditional Rosso Corsa born in the fantastic shade of Dino Blue Metallic over Beige. From the original window sticker on file, we know that chassis 28609 was originally sold new out of Ferrari of Los Gatos at the cost of $40,310.00 including an additional $670 charge for its Metallic Blue paint. Its first owner, a Mr. Yee of Sacramento, California was a dentist who kept meticulous records and kept everything from the day it was new until the day he sold it in 2011. The documentation is abundant starting with Mr. Yees financing documentation, a letter from Ferrari thanking him for his purchase and the original Ferrari of Los Gatos Salesmens business card! In 1980, while the car was under warranty, Mr. Yee requested that Ferrari North America fully repaint his car due to failing factory paint as was common in the late 1970s especially for uncommon metallic colors. Ferrari NA obliged having Wes Lasher Ferrari complete the job in which Mr. Yee thanked them for. Though the shade of Blue is just a touch darker than Dino Blue Metallic, the paint job was done to a very high level and still present excellently today. There are nearly 50 pages of service receipts present for Mr. Yees ownership including hand-written service entries in the warranty booklet chronicling the mileage from 1979 to the early 2000s. Also present are the original California Registration slips from 1979 through 2015. The documentation is truly fantastic and can be examined in the View Documents button above.

In 2011, after 32 years of ownership, Mr. Yee sold the car to its second owner, a Ferrari Concours Judge located in Sacramento, California. At that time, a full engine-out service was completed at 51,678 miles by Stewarts Automotive. The second owner showed the car often and won multiple FCA Platinum Awards with this example. In 2018, the current and third owner purchased the car marking the first time it lived outside of California since 1979. Upon receiving the car in June of 2018, the current owner commissioned a major service that included timing belt, clutch replacement, fluids change, suspension bushing replacements, A/C overhaul, ignition system correction and much more totaling over $21,000 at 57,676 miles. The car was also Ferrari Classiche Certified. In April of this year, another fluids service was completed along with some other general sorting, carburetor rebuild and Classiche Certification updated per Ferraris new yearly requirements. This updated certification is stamped in its included Ferrari Passport Booklet. All told, the cost was $7,726.24.

Today, chassis 28609 presents as a highly original example with the most documentation accompanying a Ferrari 308 that we have ever seen. No box remains unchecked with this numbers-matching, Classiche Certified, early GTB. Included in the sale are its original tools, jack, spare, Classiche Red Book, manuals, original window sticker, and records from new.

This 1979 Ferrari 308 GTB was listed for sale on 6-3-20 11:41:14. The vehicle color is not available and VIN is not available . Kindly check ad for seller's location. Seller`s stock ID is 20SG2040372610. There are other Ferrari cars currently listed for sale on our website. You may desire to see what other Ferrari cars are selling for by visiting our Sales Data page.

Note from the publisher:
Welcome to our collector car marketplace where we feature thousands of classified ad listings of vintage cars for sale. We hope that you will bookmark our site and visit often; our cars are updated every day. Furthermore we encourage you to subscribe to our mailing list so that we may periodically notify you of interesting classic cars that become available.
Home > Classic Cars For Sale > Ferrari > 308 GTB > 1979 Ferrari 308 GTB