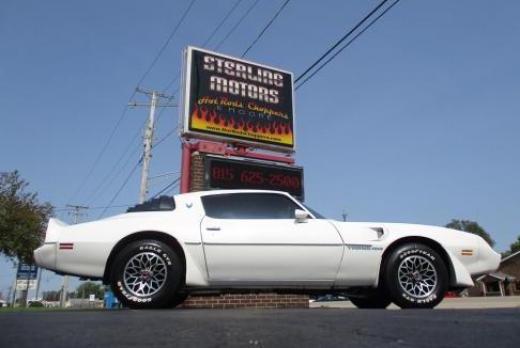 Price: USD $21,900
Mileage: 85,161
The Firebird was built by Pontiac between 1967 and 2002. The first generation Firebirds had a characteristic Coke bottle styling. The second generation debut for the 1970 model year was delayed until February 26, 1970 and was designated as a 1970 model. Replacing the Coke bottle styling was a more swoopy body style, with the top of the rear window line going almost straight down to the lip of the trunk. A distinctive, slant-nose facelift occurred in 1977 and was redone again somewhat in 1979. This particular example still has its original Cameo White paint and looks awesome with it original Light Blue cloth interior and color coordinated decals that are original to the car as well. It was a CA car so it was optioned with the Olds 403 ci 6.6 liter engine which is original to the car and currently has 85,161 miles on it. The current owner purchased this car in 2017 with just over 80,000 miles from the original owner so this is a 2 owner car. Right after purchasing it he had a brand new high performance top end installed that was provided by Mondello Performance Products. We have attached an itemized receipt showing the parts used. Highlights include the Edelbrock performance heads which were ported and matched to the intake, a stainless steel full rocker arm kit, oil-restricted push rods, a beefy cam and a lifter kit. It is fed via an Edelbrock AVS2 800cfm double pumper carb and sounds just plain nasty ripping through its long tube headers and 2.5 performance exhaust system. Other notable upgrades include the 1 wire chrome alternator, a high torque mini starter and an electric fuel pump. The transmission has been upgraded with a 3000 RPM stall converter as well as a B&M Strip/Street shift kit. The posi rear end has been upgraded with a Power Track 3:73 gear and aluminum rear end cover. Interior upgrades include the Intellitronix Digital Gauge Package as well as an Alpine BT stereo with new Kicker Speakers. Within the last 3 years close to $10,000 was spent on the upgrades we have discussed yet we have priced the car as if it were bone stock. We are sure this car will sell as quickly as it goes so you better move if you like what you see!

Back To Top
Classic car for sale by
Sterling Motors Inc

Note from the publisher:
Welcome to our collector car marketplace where we feature thousands of classified ad listings of vintage cars for sale. We hope that you will bookmark our site and visit often; our cars are updated every day. Furthermore we encourage you to subscribe to our mailing list so that we may periodically notify you of interesting classic cars that become available.
Home > Classic Cars For Sale > Pontiac > Firebird Trans Am > 1979 Pontiac Firebird Trans Am