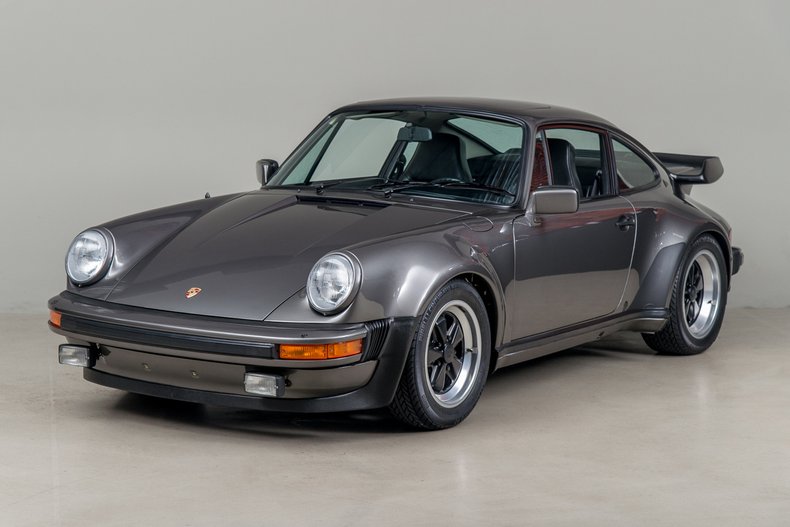 1979 Porsche 911 Turbo Carrera Coupe VIN: 9309800960 100% original California car with 1,704 miles Immaculate and unrestored Scored a perfect 100 points, and won Best of Class at The Concours on the Avenue Paint to Sample color Anthracite Metallic Comes with its original window sticker, sales paperwork, brochures, books, tools, ect Has original Blue California plates One of only 1200 Turbos imported to the US in 1979, this example was first sold by California Porsche/Audi in San Francisco in January of 1980 to Ronald Tremper Jr. of San Luis Obispo, CA. The MSRP for the 930 was $45,270, but Tremper would end up paying $58,500 for the car, almost 25% over sticker. Paying over sticker for a Turbo was common, as 1979 was the last year that the Turbo would be brought into the US (until Porsche later brought the 930 in 1986, by then the 930 had become domesticated and not as exciting to drive). The rear-engine 911 was also rumored to be on its way out with the introduction of the 928 and other front-engine Porsches. Buyers and dealers alike were speculating that the car would double in value within a few years. Tremper was 27 when he purchased the car, and took out the longest loan possible to afford the car. The Turbo would not be paid off until December of 1988. More of a treasured possession than a car, the Turbo lived in his converted garage/office sitting on carpet until he sold the car in 2009. He would only take it out for special occasions, and the occasional drive tallying up only 1275 miles in 30 years. The longest journey it ever took was the 256-mile drive home from the dealership in 1980. This Turbo has only covered 1,704 miles since new, and is in completely original and unrestored condition. If you wanted to see what a Porsche 930 looked like when it sat on the showroom floor in 1979, here it is. Since arriving at Canepa in early 2014, the car has been thoroughly inspected and serviced. Over 250 hours of concours level preparation were invested into the car to ensure that it presented even better than it 1,704 miles would indicate. Every mechanical system was gone through completely, including the turbo and wastegate, and each system operates as new as they would have come off the showroom floor. We have shown the Turbo at the 2014 Porsche Parade Concours, and the 2014 Carmel-By-The-Sea Concours on the Avenue where it won its class, and became the first car to score a perfect 100 points in class. We believe there is no finer example of a 930 in the world. 3299cc Turbocharged Flat Six Horsepower: 261 Torque: 291 ft/lbs Top Speed: 155mph 0-60mph: 5.6 seconds Porsche Options: Metallic Paint to Sample Limited Slip Differential Sports Seats, Left and Right Electric Sunroof Electric Passenger Side Mirror

This 1979 Porsche 911 Turbo was listed for sale on 3-2-19 14:53:30. The vehicle color is Anthracite Gray Metallic and VIN is not available . Kindly check ad for seller's location. Seller`s stock ID is canep4875. There are 154 other Porsche cars currently listed for sale on our website. You may desire to see what other Porsche cars are selling for by visiting our Sales Data page.

Note from the publisher:
Welcome to our collector car marketplace where we feature thousands of classified ad listings of vintage cars for sale. We hope that you will bookmark our site and visit often; our cars are updated every day. Furthermore we encourage you to subscribe to our mailing list so that we may periodically notify you of interesting classic cars that become available.
Home > Classic Cars For Sale > Porsche > 911 Turbo > 1979 Porsche 911 Turbo