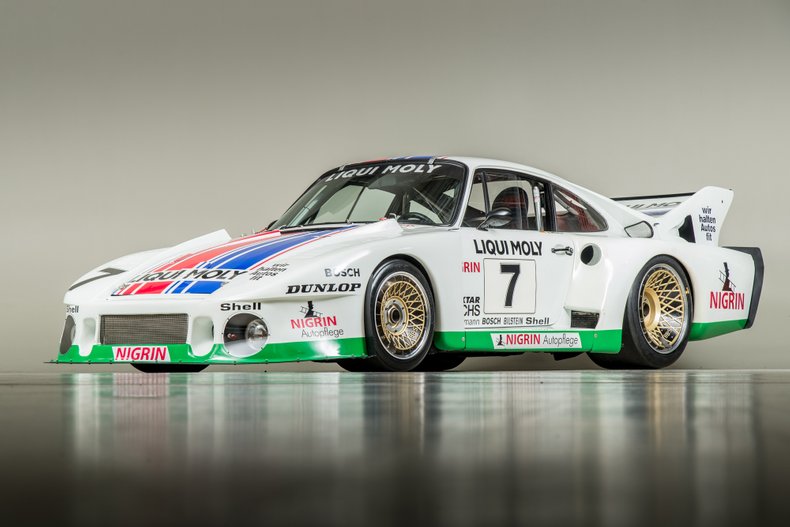 Price: Contact Seller for Price
View high resolution photos Two 1st place finishes with a total of 15 podiums First of the Joest-built Porsche 935s Driven by Reinhold Joest, Rolf Stommelen, Volkert Merl, Jochen Mass Owned by former F1-czar Bernie Ecclestone Chassis never damaged or modified, remains as raced by Joest Major top-end rebuild on engine performed recently with 3 hours on engine 3.2-liter twin turbocharged flat six engine When Porsche announced that they would be ending factory support for the 935 at the beginning of 1979, there was a collective sigh among competitors who had finally waited for the extremely dominant 935 to stop being produced. While the factory wouldnt be building new cars, Porsche would keep supplying new parts and a few independent teams, with Porsches blessing, were keen to build modified 935s and to breathe new life into the platform. Joest Racing was one of those who continued to develop and advance the 935 to levels beyond what Porsche might have even considered possible in the first place. This car, 009 0001, is the first Joest Porsche 935 ever built. Of the complete Porsche 935 body-shells that were made available by Porsche, Joest Racing was the first to receive one. Modifications included turning the rear of the Porsche tub into a tubular space frame, allowing better suspension mounting and was much lighter. Porsche ran a special type of bodywork on the Baby Porsche 935 2.0, with Joest being the only team that was supplied and allowed to use these factory-specific panels. Special aerodynamic tuning was done to eke out every conceivable extra bit of downforce while reducing drag, originally lead by Norbert Singer during development. Some of the most notable differences include the front fenders with the raised channels to guide air down the car to the rear inlets near the rear window to aid the intercoolers. The factory air-to-water intercoolers were replaced with a more efficient air-to-air version, with proven race application through Joests own racecars. Joests racing and design acumen would lead 009 0001 to two 1st place finishes with 15 podiums during its racing career. After finishing the 1981 season, this 935 was retired from active racing duty. The car was then purchased by Swiss collector Albert Obrist, who would then sell the 935 to former F1-czar Bernie Ecclestone. Canepa would purchase the car in early 2006 and performed a major race preparation on the car including brakes, fuel system, fuel injection pump, shock absorbers and chassis setup. The 935 was subsequently purchased by Jamie Mazzotta who would own the car until sold to its most recent owner. The LiquiMoly Porsche 935J would return to Canepa in October 2018 with a fresh rebuild of the top-end components of its engine. Inspected from back to front, the original Joest chassis was in the same condition as it arrived at Canepa the very first time 12 years earlier. Employing the Canepa Difference process, the car was cleaned by hand ensuring that every inch of the car was spotless. Its mechanical inspection resulted in a clean bill of health and is an excellent example of an iconic and historic 935. This Porsche 935J, the first chassis constructed by Joest, represents an incredible piece of automotive history. Its impressive provenance, proven race history, excellent condition and ownership history is compounded by that this 935J is a product of a proven race team that to this day remains in the limelight. With its significant performance tuned to perfection with more power available at the turn of the boost knob, this incredibly authentic Group 5 racer is at home at any vintage historic racing weekend or part of an exquisite private collection.

This 1979 Porsche 935 was listed for sale on 1-1-19 19:46:25. The vehicle color is not available and VIN is 0090001 . Kindly check ad for seller's location. Seller`s stock ID is canep5882. There are other Porsche cars currently listed for sale on our website. You may desire to see what other Porsche cars are selling for by visiting our Sales Data page.

Note from the publisher:
Welcome to our collector car marketplace where we feature thousands of classified ad listings of vintage cars for sale. We hope that you will bookmark our site and visit often; our cars are updated every day. Furthermore we encourage you to subscribe to our mailing list so that we may periodically notify you of interesting classic cars that become available.
Home > Classic Cars For Sale > Porsche > 935 > 1979 Porsche 935