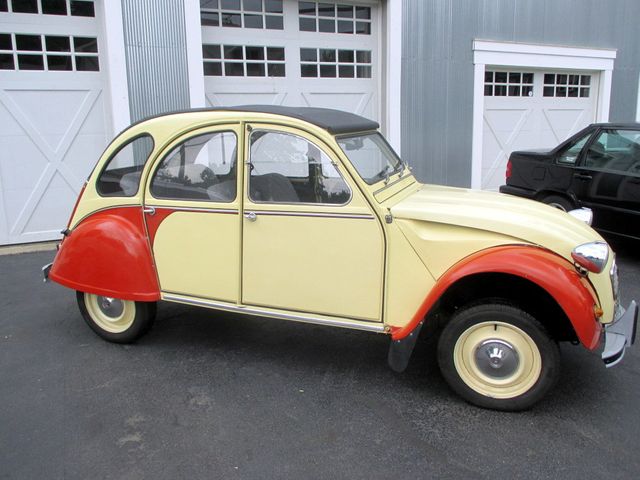 Price: USD $16,840
You cant buy happiness but you can buy a classic car. It is not the same but it gives about the same feeling. Is it Cute? Weird? or Ugly? You decide.......Either way it gets lots of smiles and attention. Well the FRENCH VANILLA FUN-MOBILE has arrived and was serviced and was a centerpiece in our showroom. This excellent condition, North Carolina totally rust free car has had a recent new interior, vinvl top and the desirable 123 electronic ignition. This Deux Chevaux was purchased from a gentleman at his residence in N.C. that also has a Charleston Edition 2CV at his other home in Charleston, S.C. It looks, runs and drives great. The Citroen 2CV (French: deux chevaux i.e. deux chevaux fiscaux, literally two tax horsepower) was an economy car produced by the French automaker Citroen from 1948-1990. It was technologically advanced and innovative, but with extremely utilitarian and deceptively simple Bauhaus inspired bodywork, that belied the sheer quality of its underlying engineering. It was designed to move the French peasantry on from horses and carts. It is considered one of Citroens most iconic cars. In 1953, Autocar in a technical review of the car wrote of, ...the extraordinary ingenuity of this design, which is undoubtedly the most original since the Model T Ford. It was described by CAR magazine journalist and author LJK Setright as the most intelligent application of minimalism ever to succeed as a car. It was designed for low cost, simplicity of use, versatility, reliability, and off-road driving. For this it had a light, easily serviceable engine, extremely soft long travel suspension (with adjustable ride height), high ground clearance, and for oversized loads a car-wide canvas sunroof (which until 1960 also covered the boot). During a production run of 42 years between 1948 and 1990, 3,872,583 2CVs were produced, plus 1,246,306 camionnettes (small 2CV trucks), as well as spawning mechanically identical vehicles like the Ami - 1,840,396, Dyane - 1,444,583, Acadiane - 253,393, and Mehari - 144,953: a grand total of 8,756,688. From 1988 onwards, production took place in Portugal rather than in France. This arrangement lasted for two years until 2CV production halted. Front wheel drive, Four doors, 602 c.c. aircooled boxer engine making a whopping 29 horses with a 4 speed in the dash shifter catapulting this classic to a top speed of 72 MPH. Totally rust free southern car!! Quite a few cars in history were aimed specifically at the task of shifting owners from using horses to using cars, but just a handful stayed in production in almost unchanged form for decades while remaining relevant. We often think of the Volkswagen Beetle as the most prominent example of this transition in (forgive this next phrase) personal mobility solutions, as they are now called, but in reality many auto-producing countries had an analogous vehicle in their automotive history, one that was developed specifically to get the masses into car seats. Named quite literally as two horses, the car was conceived by Citroen in the 1930s with the purpose of moving the rural population of France into automobiles. Even though France boasted an early and incredibly varied automotive industry, until the 1930s this generally meant cars in the cities for the middle and upper classes, while the countrys large rural population lagged behind in adopting personal cars. Even though Citroens massive project was largely completed before the outbreak of WWII, the debut of the 2CV was shelved for almost a decade, emerging in the postwar years during a time when horse-drawn carts had effectively seen a comeback to the levels of the 1920s in postwar France. As many personal cars simply did not survive the war, France was almost starting from scratch in the late 1940s in building back up its fleet of vehicles large and small. The 2CV was certainly designed to be small, but more importantly it was designed to be simple to use and to repair. The very first examples that went on sale in 1949 were powered by a 375cc engine producing a grand total of 9 hp, enough to propel the 2CV along country roads up to a top speed of 40 mph and not much more. But the start of production did not necessarily mean mass production even though the car became popular in France and elsewhere in Europe almost immediately; for the first two years of assembly Citroen was completing just hundreds of units per month, significantly below the level of demand that had formed. It wasnt until the mid-1950s that production had really hit its stride, but despite the still-rudimentary nature of the car, the 2CV did not face even indirect competitors in France until much later, in the 1960s, when a fresh crop of small hatchbacks like the Renault 4 debuted to try to unseat the popularity of the Citroen model.But 2CV production continued onward, all the way until 1991 when the very last examples were produced under license in Portugal. Link to 100th Anniversary of Citroen - AM/FM, Cloth Interior Surface - Contact Rich Kushner at 717-426-2202 x101 or Rich@Swedishmotors.com for more information. -

Note from the publisher:
Welcome to our collector car marketplace where we feature thousands of classified ad listings of vintage cars for sale. We hope that you will bookmark our site and visit often; our cars are updated every day. Furthermore we encourage you to subscribe to our mailing list so that we may periodically notify you of interesting classic cars that become available.
Home > Classic Cars For Sale > Citroen > 2CV > 1980 Citroen 2CV