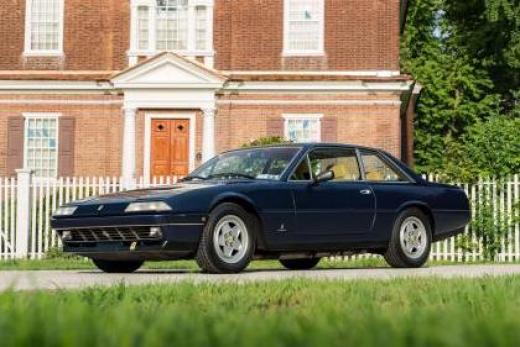 The 412 differentiates itself from its earlier siblings subtly yet smartly. The bodywork carries the Fioravanti form of 72, though its tweaked. The air dam in the front is improved, as is the trunk deck lid which has been raised to allow for greater luggage space. The result increases the cars aerodynamics and reduces the drag co-efficent a near 10%. Furthermore from an external view, body-colored bumpers, revised door and mirror design, and a change in lens choice and trim, sets the car apart from its predecessors while aligning it with the styling of the time. Internally, the seat design changed so as to compliment control layout adjustments on the center console. The brake discs, would be shrouded by a new 5-point, 5-lug contemporary star design wheel. Apart from those changes, the 412 remained similar to its predecessors, indeed representing an evolutionary step. Series production ceased in 1989, bringing an end to the 16 year styling exercise. With nearly 3,000 built globally, just over 500 examples of the 412 were produced and have been made available to US audiences only as recently as 2010.

The earliest record on file for chassis 62361, ties the reader to Paris in 1999 for a complete mechanical servicing, with a quoted 35,494 KMs covered, under the care of Mr. M Schmidt, an enthusiastic Ferrari Club member in France. Navigating the records suggests that Mr. Schmidt enjoyed the vehicle very much in the likeness of its intended purpose. The service records are linear and its recorded mileage is progressive. Just over ten years after our first receipt, in 2010, chassis 62361 is in for another complete mechanical servicing, this time with 66,739 KMs recorded. By late 2016, chassis 62361 is bought by a US-based collector and brought to the States. Most recently in its history file, exists a receipt from September 2019, for its most current complete mechanical servicing. Notably at that time, the exhaust was exchanged for a hi-performance stainless steel system.

The Ferrari 412 offers excellent value for money, particularly if presented with an example as lovely as the example we see today, chassis 62361. When most Italian manufactures were scrapping their superb designs in times of desperation, the styling of the 412 was left mostly untouched from its 1970s era pen. Sensibly enhanced over the years, the 412s retro futuristic charisma can be considered as much a piece of mid-century design as it can be a rolling sculpture. To note, chassis 62361 is offered with its owners manual, sales & service manual and radio manual, bundled in its leather carrier. As well as original tools, jack and spare.

Note from the publisher:
Welcome to our collector car marketplace where we feature thousands of classified ad listings of vintage cars for sale. We hope that you will bookmark our site and visit often; our cars are updated every day. Furthermore we encourage you to subscribe to our mailing list so that we may periodically notify you of interesting classic cars that become available.
Home > Classic Cars For Sale > Ferrari > 412i > 1986 Ferrari 412i