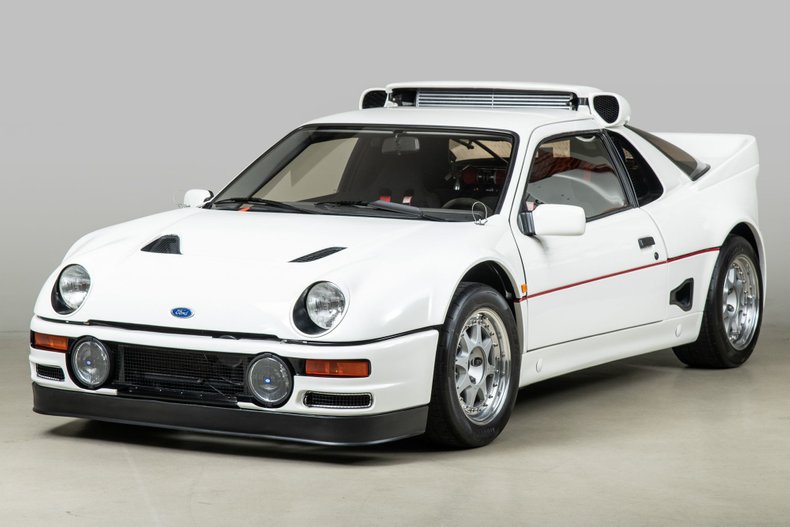 Price: Contact Seller for Price
View high resolution photos One of 24 Evolution variants built Major Canepa mechanical restoration and upgrades totaling over $212,000 Delivered new to California in left-hand drive 615 horsepower 2.1-liter turbocharged engine, 5-speed manual transmission w/variable 4WD Produced to meet FIA Group B racing homologation requirements Conceived by Ford Motorsport and built in limited numbers, the RS200 was among the most exclusive and exciting sports cars of its era. Unveiled to the public in 1984, the new purpose-built Ford was an engineering tour de force, with an advanced four-wheel drive system, a turbocharged Cosworth engine, and a sophisticated suspension system intended to cope with the punishing conditions of rally racing. Not only was the RS200 a technical marvel, its Ghia-designed bodywork was visually striking and, even in standard street form, the cars performance was truly staggering. For many years, The Guinness Book of Records listed the RS200 as the worlds fastest accelerating production automobile, achieving 0 to 60 mph in less than 3.2 seconds and a 0-100-0 time of just 12.6 seconds. The 1.8-liter RS200, and its full-out competition variant, the more powerful 2.1-liter Evolution, marked Fords attempt to conquer FIAs popular Group B formula. Though the series was canceled before Ford had a chance to fully develop the RS200s potential, these extraordinary cars went on to achieve great success in rallycross, ice racing, hill climbs, and many other forms of motorsport. Of the 146 RS200s sold including the 24 Evolution variants chassis 106 might well be the finest example ever to leave the Ford Motorsport works in Boreham, UK. According to factory records, chassis 106 was custom-tailored to the exacting standards of its first owner, Frank Profera of Sherman Oaks, California. Intended for use as an exhilarating road car, this RS200 was specified as a left-hand-drive Evolution model, finished in white and outfitted with a fully trimmed interior, Speedline split racing wheels, power steering, a suede-wrapped MOMO steering wheel, and rally-spec AP Racing brakes. As indicated on the Manufacturers Statement of Origin, this bespoke RS200 developed 600 hp nearly 100 hp more than a standard Evolution through the use of a ported Mk II head, larger turbocharger, IMSA-spec intercooler, cockpit adjustable-boost dial, and 4 works rally exhaust system. Completed and prepared for delivery to California in spring 1989, this specially tuned RS200 commanded a lofty retail price of 63,357.55 ($93,509.) Amazingly, the RS200s initial performance was not enough to satisfy Mr. Profera, who eventually sent the engine to Brian Hart Limited in Essex, UK, for further tuning. Mr. Hart had overseen the development of the RS200 Evolution engine for Ford Motorsport, and his reputation for creating high-performance engines was well known throughout the racing world. Working in tandem with East Coast Racing, Mr. Hart designed a second ECU, with full mapping for street use, along with other modifications for reliability and strength. The result was an engine that produced 704 bhp at 8,000 rpm with 535 lbs./ft of torque at 5,550 rpm. In a letter written by Bob Howe, a former vehicle development manager who worked on the RS200 project with Ford Motorsport, he testifies to chassis 106s revered status. In my opinion the changes Frank made turned this car into the most unique example of the RS200 anywhere; certainly, I dont know of another which has been boosted so much, made safer and legal for road use as well as having been made civilized, Howe wrote. Since leaving Mr. Proferas hands in 2003, the RS200 was owned and maintained by prominent collectors including David Kedward, a noted UK enthusiast with a passion for historically significant rally cars. In the care of the previous o

This 1986 Ford RS200 was listed for sale on 9-5-20 08:29:42. The vehicle color is White and VIN is SFACXX8J2CGL00106 . Kindly check ad for seller's location. Seller`s stock ID is canep6197. There are other Ford cars currently listed for sale on our website. You may desire to see what other Ford cars are selling for by visiting our Sales Data page.

Note from the publisher:
Welcome to our collector car marketplace where we feature thousands of classified ad listings of vintage cars for sale. We hope that you will bookmark our site and visit often; our cars are updated every day. Furthermore we encourage you to subscribe to our mailing list so that we may periodically notify you of interesting classic cars that become available.
Home > Classic Cars For Sale > Ford > RS200 > 1986 Ford RS200