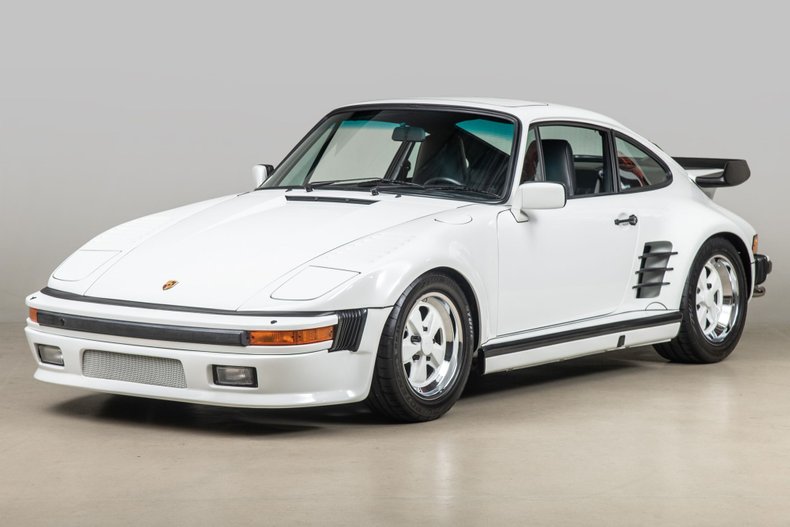 Price: Contact Seller for Price
Click here to view high resolution photos 3 owners 3,376 original miles Time-capsule quality Built by Porsches Sonderwunsch department (Special Wishes Department) Less than 250 examples built by Werks 1 between 1981 and 1986 Final year built by the special Werks 1 department MSRP of 172,351.15 Deutschemarks Ordered in European specification, immediately imported to US in 1987 Special white paint finish over full black leather interior 4-speed manual transmission, 3.3-liter air-cooled turbocharged engine The word Sonderwunsch has a special meaning to many Porsche fans worldwide, with many gravitating towards cars that have passed through this elusive place. Translated, it means Special Wishes, Porsches special department where those with the wherewithal could personalize and upgrade to their hearts content. Located across the street from the main Porsche factory, Werks 1 was responsible for a limited number of special cars to wear the Porsche badge, with one type of car in particular that is now known worldwide: the 930 Turbo Flachbau Slantnose. Originally created for a particular client wanting a car that looked similar to Porsches mega 935 racecar, it didnt take long until other clients were requesting the same type of upgrades for their future cars. In addition to the special slantnose, clients could request a number of upgrades both cosmetic and mechanical from the special department, anything from engine upgrades to full leather interiors in the wildest combinations imaginable. These options were not available from Porsches normal production assembly line, which is why it was required for the special wishes department to perform the necessary modifications. From 1982 to 1986, less than 250 total examples were built in the special wishes department across the street. Porsche would send a factory car across the road to Sonderwunsch once completed, where the car would then be modified to the clients wishes. An unlimited choice of options also came with a hefty price tag, where it was not at all surprising that a completed slantnose would almost double the cost of a standard 930 Turbo. In 1987 Porsche began building Slantnoses on the factory line, taking over the job that the Sonderwunsch originally had and producing these series of cars from 1987 to 1989. Finding an original Slantnose that was built by the Special Wishes department is a rare find, especially those that still retain their originality and period-correct upgrades. Between 1987 and 1989, there were reportedly around 600 slantnoses produced by Porsches normal production assembly line, making these original 1982-1986 Special Wishes/Sonderwunsch slantnose cars incredibly rare. This Porsche 911 Turbo Slantnose was ordered by an American, named William Blincoe. Located in Atlanta, Georgia, he ordered this Turbo Slantnose brand new from Hahn Sportwagen in Stuttgart, Germany. Unique to the Turbo Slantnoses were two different options list, one from the Porsche factory for the base car, and another for all of the upgrades performed by Sonderwunsch. The factory car was delivered as a 911 Turbo Coupe, optioned with: Special Color, Interior special color, Special shocks, Heavy duty battery, Limited slip differential, Electric outside mirror, Left sports seat, Right sports seat, Alarm, Front windshield with graduated tint, Electric sunroof, and Leather piping around seat covers. The car, before any upgrades began, had an MSRP of 102,382.86 DM. Once the car went across the street, the real fun began. Werks 1 not only built the slantnoses, but they were the same place where RSRs, 934s, 935s, 936s, and cars of that caliber were built. Essentially the race shop and the skunkworks for Porsche, Werks 1 was where the special and secret projects often took place. Under the special works program, the Turbo received a host of u

Note from the publisher:
Welcome to our collector car marketplace where we feature thousands of classified ad listings of vintage cars for sale. We hope that you will bookmark our site and visit often; our cars are updated every day. Furthermore we encourage you to subscribe to our mailing list so that we may periodically notify you of interesting classic cars that become available.
Home > Classic Cars For Sale > Porsche > 911 Turbo > 1986 Porsche 911 Turbo