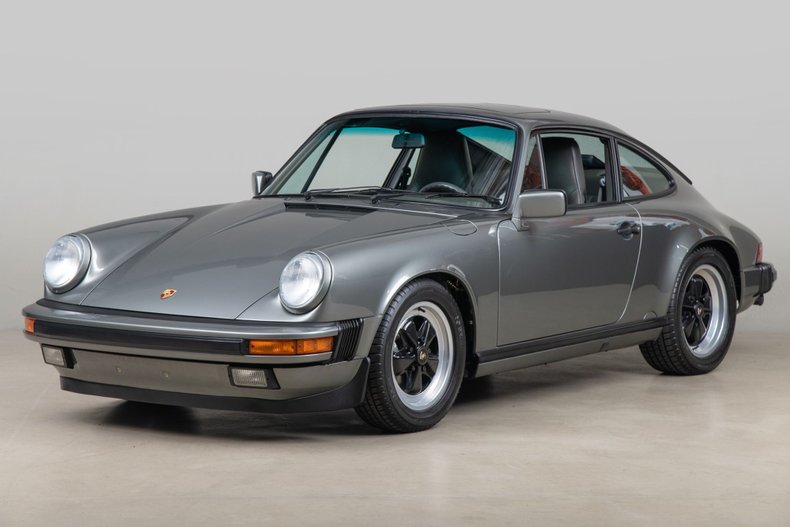 Price: Contact Seller for Price
Click here to view high resolution photos 1 owner California car since new 64,453 original miles Immaculate service record maintenance records since new Highly optioned, including limited slip differential and 8-way electric seats Rare Granite Green Metallic paint color first introduced in 1987 Original 3.2-liter air-cooled engine and G50 5-speed manual transmission Includes books, service records, jack, spare wheel and tire The birth of the G Series 911, which was produced from 1974 until 1989, was the next evolution of the 911 and proved to be an incredible foundation to work with. With the G series introducing some worldwide classics like the Carrera, which shared the legendary Carrera RS engine, or the 930, the first turbocharged 911 street car, there was a little bit of everything for everyone. Highly capable on the street and track and equally comfortable on long drives, the G series 911 has proved time and time again that evolution is sometimes a good thing. 1984 marked the rebirth of the 3.2 Carrera name, having last been used by Porsche in 1977. Numerous upgrades were applied to the beloved 911 platform that made it even better to drive than before. A larger 3.2-liter engine, larger brakes, upgraded fuel and injection system components. Later models (like this 1987 car) received the upgraded G50 5-speed transmission, increased power to 217hp, and a number of interior enhancements. A long-time enthusiast of Porsches, this cars first and only owner had a special place in his heart for the air-cooled 911s. During his residency at Stanford Medical in Palo Alto, California he drove his Porsche 911T everywhere he needed to be. From 1976 until 1984 he owned that car, sadly having to sell it to help fund his new medical practice. After his medical practice was up and running and thriving, he decided that it was time to get back into a Porsche. He purchased his car new on October 1st, 1987. It was specd with a Cassette/radio Blaupunkt Reno SQR 46, limited slip differential, power locks, 16 Fuchs forged alloy wheels, 8-way electric seats for driver and passenger, cruise control, sport suspension, and a sunroof. He took exceptional care of his car throughout his entire ownership, ensuring that the car was driven but also impeccably serviced. He recalled taking the car driving up the winding roads of the California coastal mountains, enjoying long drives after a long week at his office. Using the car for daily duty for some weeks driving to his office and then switching to just a weekend car, the 911s current condition reflects the owners undying love for the car. The granite green metallic paintwork is in fantastic condition, as is the green leather interior. Through the comprehensive servicing that has been performed on his car it drives like a 911 with a quarter of the miles, instilling a sense of trust and a complete lack of worry through the corners. After 32 years of owning the car, he decided that he wasnt able to enjoy the car the way it was intended after his 71st birthday. When he thought about selling the car, he only had one person he could trust: Bruce Canepa. The owner and his wife both knew Bruce for over 30 years, and wanted to make sure the 911 found a good home where it would be appreciated and loved, just as it had been for the past 32 years with them. When the car arrived at Canepa, it was a welcome sight. Having been serviced at Canepa multiple times over the years, the 1-owner 911 had no surprises. Maintained and loved, it presents like a car with a quarter the miles. It was immediately put into Canepas system to receive the full Canepa Difference process. Upon arrival at Canepa, each and every collector car for sale is put through an extensive and diligent process called the Canepa Difference. This includes a major and comprehensive mechanica

This 1987 Porsche 911 Carrera was listed for sale on 8-9-20 09:11:42. The vehicle color is Granite Green Metallic and VIN is WP0AB0918HS122504 . Kindly check ad for seller's location. Seller`s stock ID is canep6218. There are other Porsche cars currently listed for sale on our website. You may desire to see what other Porsche cars are selling for by visiting our Sales Data page.

Note from the publisher:
Welcome to our collector car marketplace where we feature thousands of classified ad listings of vintage cars for sale. We hope that you will bookmark our site and visit often; our cars are updated every day. Furthermore we encourage you to subscribe to our mailing list so that we may periodically notify you of interesting classic cars that become available.
Home > Classic Cars For Sale > Porsche > 911 Carrera > 1987 Porsche 911 Carrera