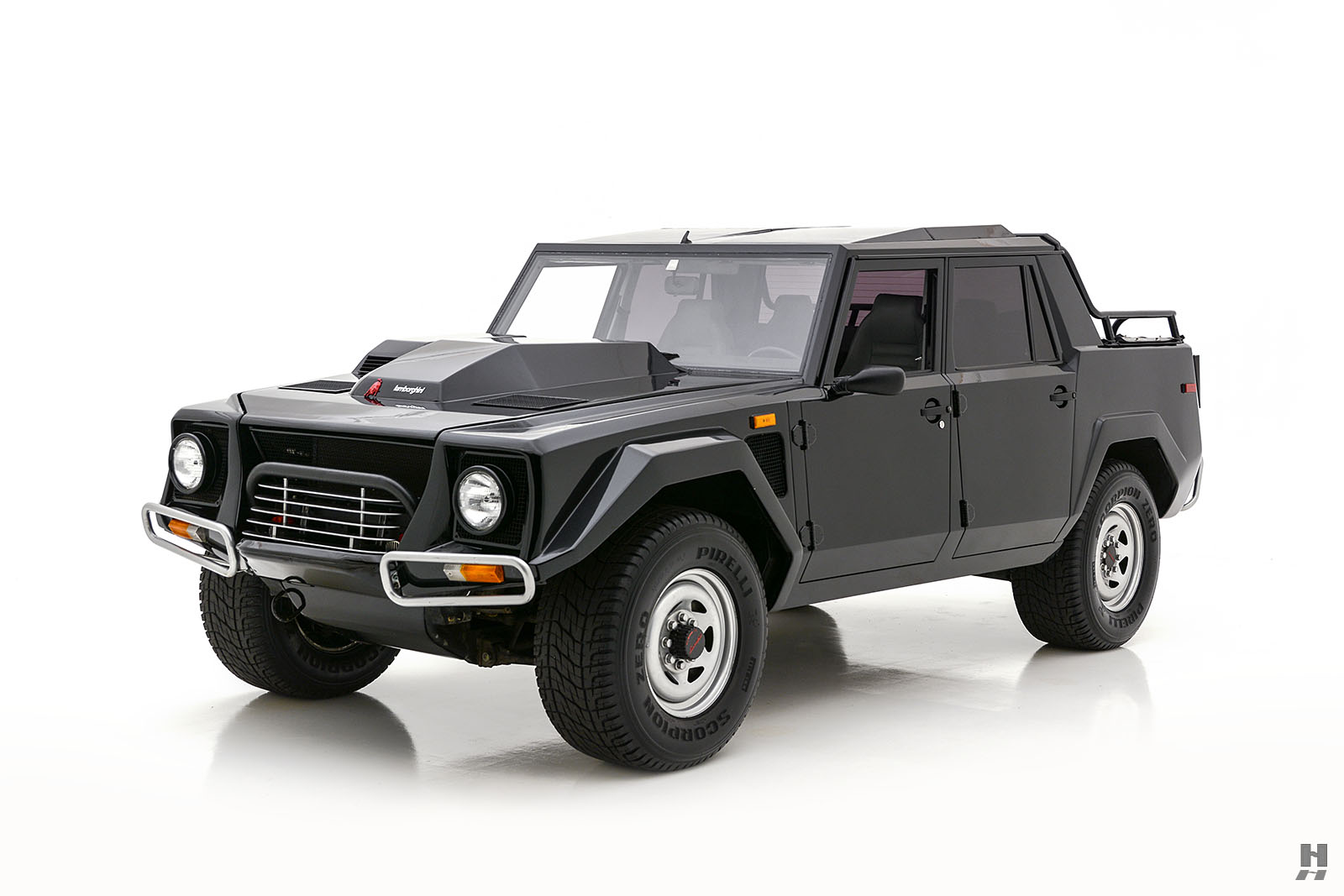 Price: USD $269,500
Many of todays enthusiasts lament the current trend of sports car manufacturers sacrificing tradition to meet the insatiable demand for high-end sport-utility vehicles. Porsche proved to the world that a sports car company could successfully market an off-roader and other prestigious brands have since followed suit with even Bentley and Rolls-Royce joining the fray. Recently Lamborghini announced their new Urus SUV but before we collectively groan at the thought of a renowned Italian supercar company selling out for the sake of a few bucks we should remember that Lamborghini is among the only manufacturers of its kind with serious off-road cred lurking in its back catalog.The outrageous V12-powered LM002 off-roader debuted in 1986 creating a sensation among enthusiasts and the motoring press. From Miura to Countach Lamborghini had a reputation for shocking audiences and the LM002 more than lived up to that tradition. The story of Lamborghinis curious foray into off-roading began approximately ten years prior with a prototype military vehicle called the Cheetah. In the 1970s Lamborghini struggled financially and looked to military contracts as a way to boost the bottom line. Concurrently the US Military was looking to replace the venerable Jeep with a single multi-purpose light-armored off-roader. Lamborghini in conjunction with Mobility Technology International (MTI) designed and built a rear-engine prototype using a Chrysler V8 and three-speed torque flight transmission. But the fiberglass body was not suited to combat and the bulky underpowered Chrysler V8 contributed to wayward handling. Making matters worse the US Government rejected the Cheetah not only for its technical shortcomings but for the fact that it was not built in the USA. Subsequent legal matters related to MTI infringing on patents further muddied the waters and the whole debacle forced Lamborghini into receivership.In 1980 Swiss brothers Patrick and Jean Claude Mirman purchased Lamborghini and began revitalizing the lineup for the new decade. They refreshed the Countach added the V8 Jalpa to the line and curiously revisited the Cheetah that bankrupted the company. Acting on unbridled enthusiasm or perhaps unchecked insanity they shoehorned the Countachs 5.2-liter 444 horsepower V12 into the front driving all four wheels through a 5-speed manual gearbox and robust dual-range transfer case. It was finished off with brash bodywork and 17-inch wheels with massive bespoke Pirelli Scorpion Zero tires designed specifically for this project. The LM002 styling was pure Lamborghini: Brutal hard-edged and muscular without a single apology.In reimagining the Cheetah for civilian use the LM002 received a luxuriously trimmed cabin with four individual leather bucket seats wood trim electric windows air conditioning and even an available factory winch. The rear featured a small but deep bed capable of hauling four strong-hearted passengers on side-facing bench seats or just about anything one could imagine tossed into the back of a 6780 pound 444 horsepower Lamborghini pickup truck. Despite its troubled gestation the Rambo Lambo (nickname credited to Brock Yates) sold well with about 300 units finding buyers around the world between 1986 and 1993. The LM002 has enjoyed a resurgence in collectability perhaps spurred on by the new generation of SUVs that while interesting cant hold a candle to the legendary utterly outrageous LM002.The 1988 LM002 presented here is a fine example coming to us from long-term ownership in a significant private collection. Registry information shows this truck was delivered new to a buyer in Miami Florida and by the 1990s it lived in New York before finding its current owner in 2004. Finished in black over a gray interior this is an honest and original example that presents in good overall condition showing just over 18000km. Black is arguably the best color for an LM002 highlighting the trucks aggressive nature and angular shape. The paint is glossy and generally sound with some checking and crazing noted in several areas. It rides on the factory-original steel wheels fitted with correct 345/60-R17 Pirelli Scorpion tires purchased new from Pirelli and fitted within the last two years. The sale will include a spare set of extremely valuable sand-only Scorpions which were a popular option in the Middle East where unsurprisingly the LM002 sold very well.The interior presents in good overall condition with gray leather and matching carpets. The upholstery and splashes of wood trim belie the trucks military roots. The seats show some moderate cracking creasing and stiffness in the leather that is consistent for this original unrestored truck. Carpets are tidy and in good condition front and rear as are the leather door panels and headlining. The large center console houses an array of soft-touch switches with warning lights for just about every function imaginable. Two levers control the transfer case and the locking differentials. The rear bed cover is in excellent condition as are the jump seats upholstered in gray to match the interior.Lamborghinis mighty 5.2-liter V12 is a beautiful piece of engineering and one of the greatest engines of the modern era. For duty in the LM002 it received a unique airbox and auxiliary filters for dusty environments. This example is tidy and appears well maintained with evidence of recent service including a newer radiator. With nearly 3.5 tons to move around performance is not quite up to Countach standards but the snarling soundtrack more than makes up for it.In recent years the LM002 has come into its own as a full-fledged collector vehicle. Big brash and loud it is literally and figuratively The Lamborghini of Off-Roaders. This original US market example has relatively low miles and is ready for enjoyment anywhere it will take you. It can be enjoyed as-is with minimal preparation with room for improvements as desired. With only 300 built worldwide the LM002 is one of the most fabled 80s era Lamborghinis and this truck presents a rare opportunity to acquire a great example of the incredible Rambo Lambo.Offers welcome and trades consideredFor additional details please view this listing directly on our website https://hymanltd.com/vehicles/6563-1988-lamborghini-lm002/

Note from the publisher:
Welcome to our collector car marketplace where we feature thousands of classified ad listings of vintage cars for sale. We hope that you will bookmark our site and visit often; our cars are updated every day. Furthermore we encourage you to subscribe to our mailing list so that we may periodically notify you of interesting classic cars that become available.
Home > Classic Cars For Sale > Lamborghini > LM002 > 1988 Lamborghini LM002