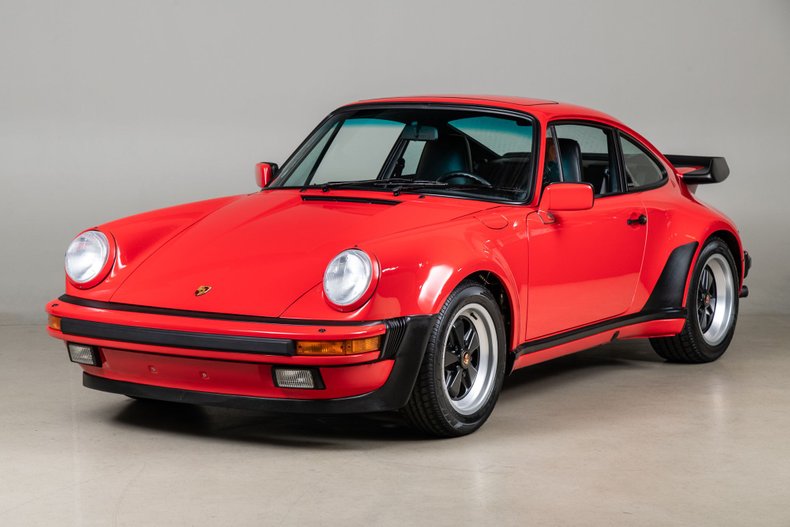 Price: Contact Seller for Price
1988 Porsche 911 Turbo Coupe View high resolution photos 3 owners, 6,747 miles Matching numbers engine and transmission Major comprehensive service by Classic Porsche Atlanta and Canepa Time-capsule 930, preserved and outstandingly original inside and out Large collection of service documents, mileage documentation Porsche Certificate of Authenticity, original window sticker, maintenance documents Books, tools, and spare Revealed to the world in 1974 at the Paris Auto Show, the concept Porsche 911 Turbo sparked a turbo street car era and was the beginning of what would span a long 15-year production run from 1975 to 1989. With Porsche taking their motorsports experience and applying it to their street car, the 911 Turbo became the turbo-boosted hot rod 911 that you could buy from the factory, with a warranty. Originally released with a 3.0-liter engine, in 1978 it received a 3.3-liter engine which helped with turbo lag and power, bumping up the power from 260hp to 300hp. Porsche now makes a 911 Turbo variant for every 911 generation, all due to the success and critical acclaim to the car that started it all, the Porsche 930. This Guards Red 911 Turbo was completed at the Porsche factory on November 20th, 1987. It was optioned with a limited slip differential, Blaupunkt Radio Reno, steering wheel with a raised hub, alarm system, drivers side lumbar support, electric sliding sunroof, and black leather interior. Destined for the U.S., the car was first delivered to Legend Autorama of Amityville, New York. The high performance 911 wouldnt sit idle very long before its first owner eyed it at the dealer, looking for something that could excite him like his usual work transportation: fighter jets. On March 31st, 1988, Karl Lenker purchased it and drove the car back to Maryland while remaining the sole owner until 2016. Predictably, Lenker did not stray from the usual jet fighter stereotype of wanting something fast on the ground as well as keeping fastidious notes and details about his transportation. During his entire ownership he kept an aircraft logbook that he recorded each and every trip that he took in the car, documenting the mileage from beginning to end and noting where he went. He drove the car sparingly until 2001 where he had amassed most of the 6,634 miles on the odometer. He kept the car serviced and up to date, driving the Turbo for special occasions while keeping it stored in his garage, evident from the all original Guards Red paint finish. In the late 90s he retired to his home in Florida after serving 25 years as a fighter pilot for the U.S. air force. In 2016, he sold the car to American racecar driver, Terry Borcheller, who had been eyeing Lenkers Turbo for a while. A 5-time 24 Hours of Le Mans racer who placed 3rd in class in 2001 with a Saleen S7-R, Borcheller knew that the Porsche was mostly undisturbed since 2001 and wanted to do a thorough service. He decided that he would have the capable hands at Porsche Classic Atlanta go through the car to get it back to driving condition. The Turbo received a wide spectrum of work at Porsche Classic in Atlanta in order to get the car into as-new condition. This included replacing the fuel pump, warm-up valve, fuel distributor, fuel gauge, ignition control unit, the ignition coil, fuel accumulator, along with other various fuel system-related items. A new clutch, pressure plate and throw-out bearing were installed. A full maintenance service was performed, which included new engine oil, brake fluid flush, intercooler gasket, belts, wiper blades, and other various items. New hood struts were installed. In all, this 911 Turbo received $27,116.73 of work from Porsche Classic, completed on November 21st, 2016. Terry kept the 930 until approximately early 2018 when it was sold to its most recent owner and kept in California. In mid 2019

Note from the publisher:
Welcome to our collector car marketplace where we feature thousands of classified ad listings of vintage cars for sale. We hope that you will bookmark our site and visit often; our cars are updated every day. Furthermore we encourage you to subscribe to our mailing list so that we may periodically notify you of interesting classic cars that become available.
Home > Classic Cars For Sale > Porsche > 911 > 1988 Porsche 911