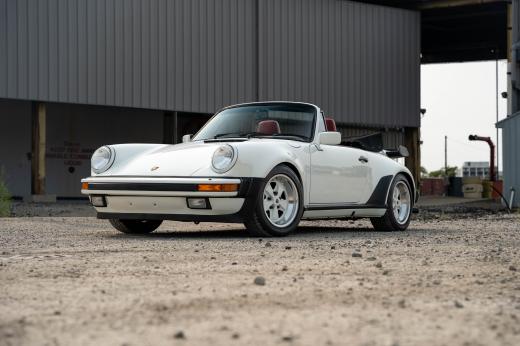 Porsches initial work with turbocharged racing cars in the 1960s led to a long lineage of Turbocharged greatness that is still present today. Porsches success with road-going turbocharged cars began in 1975 with the Turbo Carrera. It was a 3.0L, non-intercooled unit that produced 260hp with a top speed of nearly 160 mph. This made it the fastest production car upon release. Customers quickly realized these boosted beasts demanded respect and carefully calculated applications of the throttle pedal as the boost surge came on strong and abrupt often sending inexperienced drivers into uncontrollable spins that resulted in serious accidents. Therein lies the 930 Turbos infamous nickname; the widowmaker. As technology advanced, Porsche increased engine capacity to 3.3L, added an intercooler, and refined the way boost was delivered making them a bit more manageable to drive spiritedly. Each year, the Turbo platform improved upon the previous with the later 1980s variants being the most drivable with the most creature comforts as opposed to the sparse earlier cars. Now, the 930 Turbo of the late 80s is viewed as a must-have for any astute car collector. As with many mass-produced sports cars from the 1980s, many example deteriorated at the hand of careless owners at a time when these cars were merely, used cars. Thus, in the slew of internet offerings, it is difficult to find a highly original example with interesting options finished in a color besides black or silver. That brings us to the exception to the status quo we have on offer here.

Chassis # WPOEB0938JS070171 with engine # 68J00459 is a 1988 Porsche Turbo Cabriolet finished in Grand Prix White over special ordered Lipstick Red Interior. It has traveled 72,116 miles from new. In examining the original window sticker on file we know that this example was delivered new to Princeton, New Jersey optioned with the items below for a total sticker price of $84,157.00-

Chassis 0171 resided in Florida for the majority of its life. Extensive service stamps can be found in the original maintenance booklet, tracking both the mileage and attentiveness to service intervals by previous owners. The current owner and consignor purchased the car in 2014, adding it to a vast air-cooled Porsche collection where it was driven sparingly while being maintained as needed. Today, the car presents as a highly original example in excellent driver condition that is exemplary of a car with far less mileage than the odometer displays. Clearly cared for and stored indoors its entire life. It is mostly original paint, retaining original vin stickers on the hood, fenders, front trunk, engine hatch, and doors. The interior possesses an inviting and evenly distributed patina that should not be touched. It drives wonderfully, in a way that only an original car can, and possesses most of its factory cadmium plated finishes, original stickers, clamps, and coatings. Despite minor paint blemishes commensurate with driving, this example is in excellent, collector-quality condition with interesting options. Included in the sale are a clean Carfax, original window sticker, tools, manuals, and records.

Note from the publisher:
Welcome to our collector car marketplace where we feature thousands of classified ad listings of vintage cars for sale. We hope that you will bookmark our site and visit often; our cars are updated every day. Furthermore we encourage you to subscribe to our mailing list so that we may periodically notify you of interesting classic cars that become available.
Home > Classic Cars For Sale > Porsche > 911 Turbo Cabriolet > 1988 Porsche 911 Turbo Cabriolet