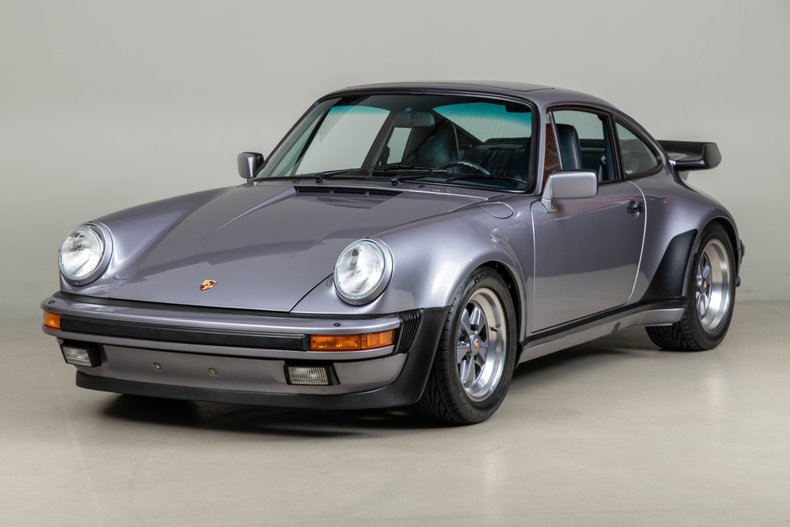 Price: Contact Seller for Price
1988 Porsche 911 Turbo VIN: WP0JB0931JS050102 One owner, 4,905 miles 100% original paint and interior Matching numbers engine and transmission Stored inside for over 31 years California car for its entire life Recent complete service Has books, tools, jack and spare Revealed to the world in 1974 at the Paris Auto Show, the concept Porsche 911 Turbo sparked a turbo street car era and was the beginning of what would span a long 15-year production run from 1975 to 1989. With Porsche taking their motorsports experience and applying it to their street car, the 911 Turbo became the turbo-boosted hot rod 911 that you could buy from the factory, with a warranty. Originally released with a 3.0-liter engine, in 1978 it received a 3.3-liter engine which helped with turbo lag and power, bumping up the power from 260hp to 300hp. Porsche now makes a 911 Turbo variant for every 911 generation, all due to the success and critical acclaim to the car that started it all, the Porsche 930. This 1988 Porsche 911 Turbo was completed on July 11th, 1987 and was destined for the golden state of California. Painted in Diamond Blue Metallic with matching Fuchs alloy wheels, the car was optioned with a Marine Blue leather interior, a steering wheel with a raised hub, a Blaupunkt Reno radio, Sport seats with electric height adjustment, an alarm system, and an electric sliding sunroof. Purchased new from Rector Motor Car Company on March 24th, 1988, the first and only owner would take delivery of the 911 and bring it to his home in Berkeley, California. During his ownership, he would keep his prized 911 Turbo in his garage, driving it sparingly and regularly to maintain its systems. During his 31-year ownership, this 911 Turbo has only been driven a total of 4,905 miles. This time capsule 930 is one of the lowest mileage and finest condition examples Canepa has ever seen. With its as-new original paint and interior in immaculate condition, paired with the rest of the car being in pristine condition, shows what a proper preservation example looks like. Growing older and wanting to thin his personal collection of cars, the owner contacted Canepa in late 2018 in hopes to sell the car among Canepas inventory. A week later, the Diamond Blue Metallic 930 was transported to Canepas headquarters. Upon arrival, the car was inspected thoroughly from front to back, observing all the details of the original Turbo. With the idea set of how to bring the car to concours-level condition, Canepa set to work and entered the car to our system to receive the Canepa Difference process. The Canepa Difference is a set of perfected processes as a result of more than three decades of experience, covering all aspects of mechanical and cosmetic needs for any automobile. Beginning with a complete mechanical inspection and servicing anything that needs addressing, Canepas experienced technicians looked over the Turbo. The entire car was gone through and given a sympathetic servicing from not being driven and sitting for long periods of time, ensuring all systems were functional. Once the mechanical work was completed, the car moved to Canepas detailing department for an industry-leading concours-level detailing. The Turbo received a deep cleaning, removing all of the factory cosmoline underneath that revealed all of the factory finishes in as-new condition, only possible from being driven so few miles. The car was then treated to a meticulous and gentle cleaning of the exterior, interior, trunk and engine bay. The original factory paint finish was lightly polished with foam pads, bringing the Diamond Blue Metallic to a sheen of pure brilliance. The original Marine Blue leather interior was cleaned lightly, not needing much to bring it back to looking as new. Now completed, this 4,905 original-mile 1988 Porsche 911 Turbo shows as though it just arrived from the Porsche showroom floor. In immaculate condition throughout, with its al

This 1988 Porsche 911 Turbo was listed for sale on 4-24-19 06:56:43. The vehicle color is Diamond Blue Metallic and VIN is not available . Kindly check ad for seller's location. Seller`s stock ID is canep5885. There are other Porsche cars currently listed for sale on our website. You may desire to see what other Porsche cars are selling for by visiting our Sales Data page.

Note from the publisher:
Welcome to our collector car marketplace where we feature thousands of classified ad listings of vintage cars for sale. We hope that you will bookmark our site and visit often; our cars are updated every day. Furthermore we encourage you to subscribe to our mailing list so that we may periodically notify you of interesting classic cars that become available.
Home > Classic Cars For Sale > Porsche > 911 Turbo > 1988 Porsche 911 Turbo