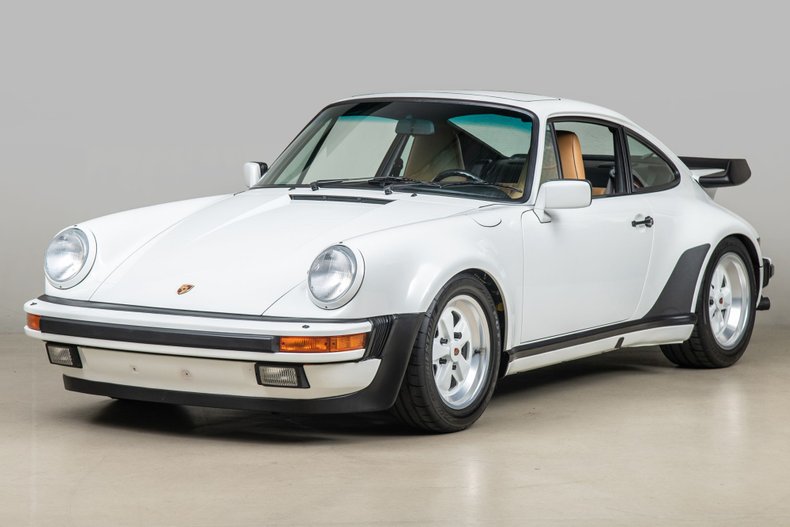 Price: Contact Seller for Price
View high resolution photos 22,414 miles - 100% original paint and interior Matching numbers per Porsche Certificate of Authenticity Last year of the G-body Porsche 911 Turbo Only G-body Turbo to feature the G50 5-speed transmission Has original window sticker, owners manuals, tools, compressor, and spare Revealed to the world in 1974 at the Paris Auto Show, the concept Porsche 911 Turbo sparked a turbo street car era and was the beginning of what would span a long 15-year production run from 1975 to 1989. With Porsche taking their motorsports experience and applying it to their street car, the 911 Turbo became the turbo-boosted hot rod 911 that you could buy from the factory, with a warranty. Originally released with a 3.0-liter engine, in 1978 it received a 3.3-liter engine which helped with turbo lag and power, bumping up the power from 260hp to 300hp. Porsche now makes a 911 Turbo variant for every 911 generation, all due to the success and critical acclaim to the car that started it all, the Porsche 930. This Porsche 911 Turbo was completed by the Porsche factory on November 2nd, 1988 and was destined for the U.S. after being ordered by Brumos Porsche of Jacksonville, Florida. Porsche 911 Turbos were heavily optioned from the factory as standard, which included items such full power seats, heated seats, leather interior, an 8-speaker sound system, limited slip differential, forged alloy wheels, and an electric sunroof. This particular 911 Turbo was optioned with a few extras, including a steering wheel with a raised hub, shortened shift lever, Grand Prix white painted rims, and the luggage compartment in black velour. The total factory MSRP was $73,010. The car was purchased by Kerry K. Wrigley who was based in Belleville, Illinois, with the first report of ownership in the early 1990s. During his 19+ year ownership he drove the car regularly but not very far, attributing to the low original mileage of the Turbo. During his ownership he kept the car regularly serviced evidenced by the collection of service records. He owned this car until 2008 when the car was sold to its 2nd owner, who was based in Chicago, Illinois. This 2nd owner drove the car sparingly, adding very few miles to the Grand Prix White 930 during his ownership of 5 years. In 2013 Canepa acquired the car, Bruce Canepa being a personal friend of the 2nd owner. The 911 Turbo did not disappoint, being a fine specimen of what an original and excellently cared-for Turbo looks and performs like. Paired with the time-capsule quality of this example, it was the perfect combination of elements that make it a Canepa car. Each and every collector car that comes to Canepa is put through and extensive and diligent process called the Canepa Difference. This includes a major and comprehensive mechanical inspection where all systems are checked and serviced as necessary. They also receive an award-winning concours-level detailing, a thorough cleaning of each and every surface that ensures that every car is a sight to behold. Finishing off with a foam-pad-only polish to enhance the paint finish, each and every car is a perfect example and a personification of Bruce Canepas impeccable attention to detail. In early 2014 the 911 Turbo was purchased by a long-time customer of Canepa who had owned many Canepa cars. He kept the car in his possession for over 6 years, keeping the car maintained at his local Porsche dealership where it received its maintenance. During his ownership he added 2,018 miles, with the odometer now reading a total of 22,414 miles. Upon its return to Canepa recently, the car arrived in the same condition that it had left which because of the Canepa Difference it was spectacular. Truly a fine example of a loved time-capsule car, original throughout and properly maintained. This car includes its original wind

This 1989 Porsche 911 Turbo was listed for sale on 9-5-20 08:29:53. The vehicle color is Grand Prix White and VIN is WP0JB0936KS050274 . Kindly check ad for seller's location. Seller`s stock ID is canep6255. There are other Porsche cars currently listed for sale on our website. You may desire to see what other Porsche cars are selling for by visiting our Sales Data page.

Note from the publisher:
Welcome to our collector car marketplace where we feature thousands of classified ad listings of vintage cars for sale. We hope that you will bookmark our site and visit often; our cars are updated every day. Furthermore we encourage you to subscribe to our mailing list so that we may periodically notify you of interesting classic cars that become available.
Home > Classic Cars For Sale > Porsche > 911 Turbo > 1989 Porsche 911 Turbo