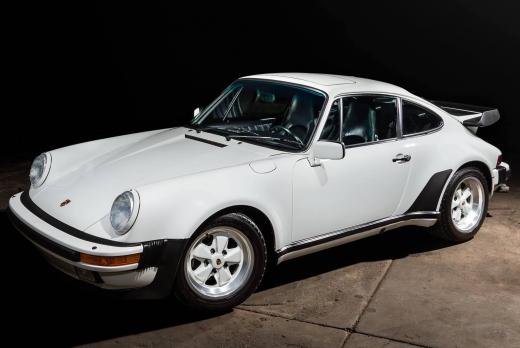 Mileage: 38,339
Chassis # WP0JB0932KS050532
Engine # 68K01044
Offered With Original Books, Tools, Jack & Spare
Showing 38,339 Miles & A Clean CARFAX Report
Well Documented Service History
A Well Spec'd G50 Turbo Per COA
As is the case with many of Porsches greatest creations, the Turbo was originally produced in an effort to satisfy homologation regulations in order for Porsche to race in the FIA Group 4 competition. Originally introduced in 1975 as the Turbo Carrera in the North American market, the cars were fitted with a turbocharged 3.0-liter flat six and 4-speed manually shifted transmission. They were given wider wheel arches to accommodate larger tires and the now iconic whale tail large rear spoiler. In 1978 Porsche upped the engine displacement to 3.3-liters which helped to mitigate the turbo lag that the cars inherently suffer from and dropped the Turbo Carrera nomenclature, leaving the car to be called the Porsche 911 Turbo worldwide. A new tea-tray style spoiler was also fitted to help integrate the intercooler which was added to the cars to increase horsepower and efficiency. In 1989 the Turbo received the now highly desirable G50 5-speed transmission which provided smoother shifting and a bit more of a daily useable rev range. The G Body 930 Turbo would be replaced by the 964 Turbo in 1990, utilizing the same 3.3-liter engine but wrapped in a newly redesigned body. Porsche early experimentation with turbo power plants would provide them with numerous racing victories as well as leaving a lineage of cars that remain some of the most exciting and thrilling air cooled vehicles available.

The example on offer here, chassis number WP0JB0932KS050532 and engine number 68K01044 (M930/68) is a 1989 Porsche (930) Turbo Coupe finished in Grand Prix White (P5) with Marine Blue Partial Leather (TP) interior. This particular turbo is highly original, retaining both its original paint and interior, both of which are in outstanding condition. It is matching numbers per the included COA and being a 1989 model year, it features the highly desirable G50 transmission. Production of this car was completed on 4/5/1989 and it was well optioned from the factory with fitted equipment including the following:

According to our provided records, the car was delivered new to Gullo-Haas Imports of Houston, Texas where it was sold on July 18, 1989, to a Mr. Butch Healey of New Orleans, Louisiana with 59 miles on the odometer. It appears that the car was under Mr. Healey's ownership for the next 10 years, moving with him to Cleveland, Ohio. Over these 10 years, the car covered a carefully driven 23,223 miles. In February of 2002, the car changed hands to a new owner in Ohio who then moved to California, bringing the car with him. The car traded hands again in 2003, ending up in Grand Junction, Colorado. In 2005 the car was sold a Mr. Fred Hudson of Pennsylvania who owned the car for 2 years before selling it to the current owner, also located in Pennsylvania, in December of 2009 with 37,500 miles on the odometer. The current owner has driven the car very sparingly over the last 9 years with the current odometer reading showing just 38,339 miles from new. Although it spent a good portion of the last 9 years sitting, the current owner maintained the car well, staying up on oil changes and replacing anything the car needed. Most recently he completed a number of items in order to keep the car in top running shape including adjusting the valves, inspecting head studs, replacing seals and gaskets, installing a new battery, rebuilding the clutch hydraulics and converting the air conditioning to R134a refrigerant. Comprehensive service records are available in the below documents section for both the current ownership as well as the previous one. As the car currently sits it is in outstanding condition both mechanically and cosmetically. The original Grand Prix White paint shows superbly, absent of the typical wear that the wider bodies and lower fascia of the Turbo models generally attract. The cars mechanical systems have always been looked after properly and it shows in the strong running and driving nature of this Turbo. Given its striking color combo and fantastic and original cosmetic condition, this 930 Turbo is sure to be an excellent addition to any Porsche collection and would be a hit at any Porsche related event worldwide.

Included with the sale of the car are the original books, tools, jack, spare, COA, and provided service documents.

Note from the publisher:
Welcome to our collector car marketplace where we feature thousands of classified ad listings of vintage cars for sale. We hope that you will bookmark our site and visit often; our cars are updated every day. Furthermore we encourage you to subscribe to our mailing list so that we may periodically notify you of interesting classic cars that become available.
Home > Classic Cars For Sale > Porsche > 930 Turbo > 1989 Porsche 930 Turbo