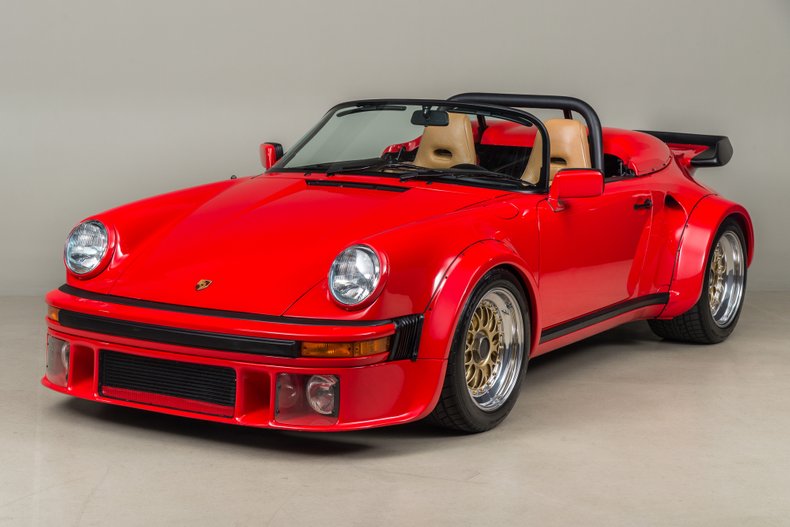 Price: Contact Seller for Price
1989 Porsche 962 Twin-Turbo Speedster VIN: WPOE80915KS173533 One-of-one extensive build by Canepa Motorsports in 1990 Jerry Woods-built 962 engine, producing 650hp, 550lb/ft torque 935 suspension components, center lock hubs, 959 brakes Factory Porsche 934 bodywork (Front spoiler, front and rear fender flares), DP rear wing BBS 3-piece center lock motorsports wheels 911 Turbo 5-speed transmission Timeless still today! Featured in Excellence Magazine in 1993 and 2013 Introduced in 1989 as the Porsche 911 Speedster, the limited low-windshield 911 was an immediate hit. Taking styling cues from the late 50s 356 Speedster, the modern version sported both narrow and wide hips, with the wider bodywork coming directly from the 930. For some this special edition 911 would be a collectible, but one owner wanted something much more from the Speedster. From the teamwork at Canepa Motorsports in 1990 and the visionary ideas from Bruce Canepa, perhaps the most powerful and fastest 911 Speedster was born: the 962 twin-turbo Speedster. Gary Primm, a car collector in his own right, would take delivery of his brand new 1989 Porsche 911 Speedster and drove it a paltry 100 miles, citing its under whelming performance as his reason for only driving it so few miles. Primm met Bruce Canepa through AMG and the two talked about how the Speedster could be improved both in the looks and performance department. As the conversations got increasingly creative and the grand vision began to come into focus, Bruce and Gary realized that this Speedster would be a creation of the ages and would be unmatched for decades. I was inspired by the sinister look of the 934 with its wide fender flares and 10 and 13 wheels, and the performance of the twin-turbo 962. Bruce immediately began to work with Gary on what the scope of the project would look like. Lots of power, excellent handling and being able to stop on a dime all excited Primm and he gave Bruce the green light. Bruce had the spare 962 engine from the Holbert-built 962 which Bruce drove and raced in 1989. With the power module figured out, it was a natural choice to choose 935 suspension and upgraded brakes to add to the Porsche Speedster. With larger wheels and tires to handle the newfound power, factory Porsche 934 bodywork was added in the form of a factory front spoiler and fender flares on all four corners, and a DP wing was sourced in order to fit the large intercooler. Competitive yet subtle, classy and serious all at the same time. With famed engine builder Jerry Woods tasked with the 962 engine build, Bruce wanted lots of torque and bottom end power with as little turbo lag as possible. With Woods anything is possible and was able to produce a 962 engine for the street with enough power to satisfy even a Group 5 racer. The engine was converted to 3.3 liters by using 100mm pistons and a 70.4mm stroke crankshaft. The twin K26 turbochargers were from Bruces own 959S with a special intercooler from Fred Garretson and stainless-steel exhaust system custom fabricated and placed the turbos behind the rear tires. This allows for short primary headers for excellent throttle response, very little lag and better performance. Updated electronics were added, a proprietary twin-ignition system installed and even a prototype fuel injection management that took advantage of the 962s twin set of staged fuel injectors was included. When not under boost, the engine runs on one set of injectors with the 2nd set coming online once boost builds. This engineering yielded a joy of a car to drive around town with ludicrous acceleration on open roads. The stainless-steel muffler is also custom made, with two tailpipes similar to a 935. While calming the snarling motor just a little bit, the Speedster still sounds like a Group 5 relative. When finished, the engine produced 581 horsepower at 6500rpm with 1.1 BAR of boost with torque at a stout 550lb/ft, and an absolute mega 650 horsepowe

Note from the publisher:
Welcome to our collector car marketplace where we feature thousands of classified ad listings of vintage cars for sale. We hope that you will bookmark our site and visit often; our cars are updated every day. Furthermore we encourage you to subscribe to our mailing list so that we may periodically notify you of interesting classic cars that become available.
Home > Classic Cars For Sale > Porsche > 962 > 1989 Porsche 962