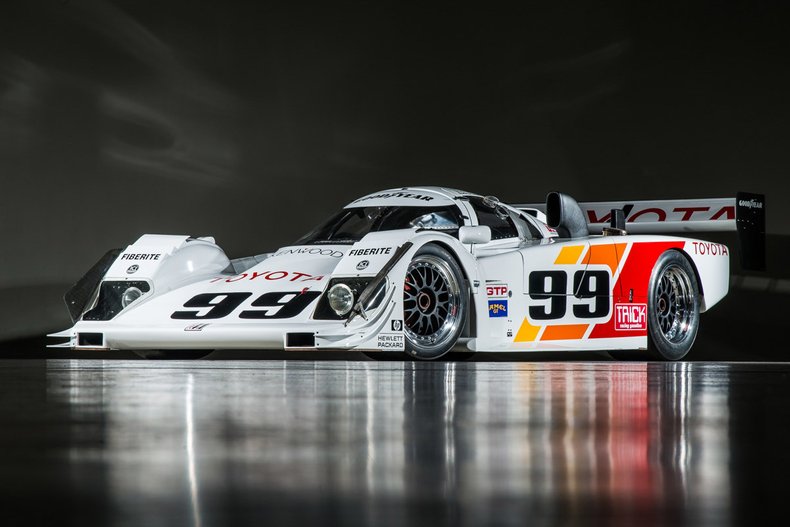 Price: Contact Seller for Price
1989 AAR-Toyota Eagle HF89 MKII View high resolution photos Five-time race winner and first Toyota GTP racecar to win a race Driven by two-time IMSA champion Juan Manuel Fangio II Designed and constructed by Dan Gurneys All American Racers Toyota 2.1-liter turbocharged engine - 815 horsepower, 614lb/ft of torque (corrected at crank) Complete concours mechanical and cosmetic restoration by Canepa in 2017 Extensive testing, race preparation and setup performed Eligible for historic racing in both U.S. and European events IMSAs GTP racing series is considered by many the height of prototype racing. Teams were required to come up with inspired designs from sets of rules that had them exploit every engineering loophole, often times resulting in designs that were radically different from one another. All American Racers (AAR) led by Dan Gurney were the premiere American team, having successfully won the IMSA GTO championship in their AAR-designed-and-built Toyota Celicas. Looking to go full bore and reign king of IMSA GTP, Toyota gave the green light and both AAR and Toyota began development on their newest creation, the HF89. Tasked with the monumental design challenge of the GTP car was engineer Ron Hopkins and aerodynamicist Hiro Fuhimori. Using their initials, the car was officially named the HF89 and subsequently the HF90, but also known as the GTP MKII as it was Toyota and AARs second GTP design. Key in design of the day, the GTP cars focused on ground-effect aerodynamics which AAR had extensive experience with from the teams Indy cars, also designed by Hopkins. Conventional in design, the GTP MKII was built around an aluminum monocoque which featured a honeycomb core for reinforcement and produced an extremely rigid chassis. A separate rear subframe was used to mount the engine and gearbox. Suspension were double wishbones on all four corners, with the springs and dampers mounted almost vertically to make room for the ground-effect tunnels underneath the car. The only engine that Toyota had available was the 2,140cc inline-4 engine, the same successful engine that was used in the championship Celica GTOs. Based on a production unit, it featured twin overhead camshafts and four valves per cylinder. It initially produced over 600 horse-power, while being mated to a Hewland five-speed manual gearbox. AAR signed Juan Manuel Fangio II to pilot the HF89, but the 1989 season proved to be a harder task than originally envisioned due to the boosted Toyota engines reliability. During the offseason that year, AAR worked tirelessly to modify the carbon-composite bodywork to increase engine cooling. The work paid off big time, with Fangio nabbing the pole position and taking the first GTP win for Toyota vs. Geoff Brabhams Nissan at Heartland Park in Kansas. He would later go on to win at Sears Point, San Antonio, and Del Mar, finishing second place overall for that season. HF89 would race again with Fangio early in the 1991 season when he won at Watkins Glen before the new MKIII racer was ready later in the season. However, the cars driving was not done, as it was then passed from Fangio to Rocky Moran. Since AAR retired HF89, it remained well preserved during its time in different collections. AAR Toyota racing veteran Dennis Aase bought the car from the team and later had it refinished to its Topeka-winning livery. It was later displayed at the Museo Fangio in Balcarce, Argentina, as a showpiece. During its time spent away from the track, the car remained in a preserved yet non-running condition. 2015 marked the beginning of HF89s long journey to its original GTP glory. Purchased by a client, Canepa was charged with the restoration to return the AAR/Toyota Eagle MKII back to its original specifications, restored to race condition and ready for historic racing. A 100% mechanical and cosmet

Note from the publisher:
Welcome to our collector car marketplace where we feature thousands of classified ad listings of vintage cars for sale. We hope that you will bookmark our site and visit often; our cars are updated every day. Furthermore we encourage you to subscribe to our mailing list so that we may periodically notify you of interesting classic cars that become available.
Home > Classic Cars For Sale > Toyota > AAR Toyota Eagle HF89 > 1989 Toyota AAR Toyota Eagle HF89