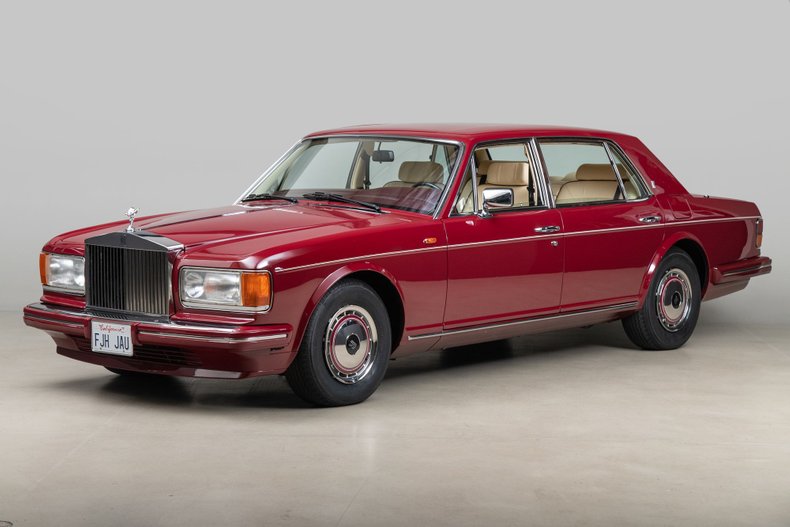 Price: Contact Seller for Price
Click here to view high resolution photos One of 27 produced in 1990 2 owners 22,877 original miles Extensive list of Mulliner Park Ward-edition options Recent major Canepa mechanical/cosmetic service - $38,597 Factory Bordeaux Red paint over creme leather interior 6.75-liter Rolls-Royce V8 engine, 3-speed automatic transmission A name synonymous with quality, opulent appointments, and the definitive automotive symbol of luxury, Rolls-Royce cars have been the de facto luxury brand for more than a century. Built with the finest materials to provide the driver and passengers in the utmost comfort, Rolls-Royce built their brand on being the best and making those inside their cars feel like VIPs. From when the company was first founded in 1904, owning one of these automobiles was a sign of being able to enjoy the finer things in life, and this 1990 Rolls-Royce Silver Spur Mulliner Park Ward is no exception. The Rolls-Royce Mulliner Spur was a limited edition of the Silver Spur II, going through a special process that brought the quality and appointments higher than a standard Silver Spur. Mulliner Park Ward was a bespoke coachbuilder in the UK that made special bodies for Rolls-Royce and Bentley motor cars. Originally slated to only build 25 of these cars, production ended up totaling 71 examples due to their popularity. Mulliner Park Ward closed its doors in 1991, making these Silver Spur Mulliner Park Ward automobiles one of the very last projects that they completed. This example is one of the first 25 examples built. A Rolls-Royce would not be a luxury icon without its plethora of options and luxury appoint-ments, and the Mulliner Park Ward edition did not disappoint. This special edition of the Silver Spur featured a number of upgrades and unique aesthetic treatments. All 71 of the cars were painted in Bordeaux Red without a textured roof. The bumpers and headlights were color matched and stainless-steel body trim ran the entire body sills and along both wheel arches. Twin magnolia coach lines, polished stainless-steel bumper inserts, an in-car refrigerator, two cocktail cabinets made from American Black Walnut wood with crystal glasses, roof-mounted reading lamps, an upgraded sound system with 10 speakers, and other special appointments. These special options, paired with the supremely-powerful 6.75-liter V8 engine and comfortable cloud-like air suspension that Rolls-Royce was known for, made the Silver Spur Mulliner Park Ward edition the choice of those looking for the best in luxury. This Mulliner Park Ward was purchased new by a couple in San Francisco, California in the early 1990s. A majority of the miles were accumulated during their ownership spanning approximately 7 years, with about 15,000 miles driven in 7 years. On December 2nd, 1997 the Rolls-Royce was purchased by close friends of the family, a husband and wife, who also happened to live in San Francisco. During their first few years of ownership, the husband and wife were chauffeured around the city to numerous events and enjoying the social life that San Francisco had to offer, often making a splash when pulling up to events in their own Rolls-Royce. In approximately 2003 the couple, now with two young boys, moved to Napa, California and took the Rolls-Royce with them. During their time in Napa, they employed a neighbors son as their chauffeur so they could enjoy the number of wineries without the worry of having to drive. During this time, the car was regularly serviced at British Motor Car Distributors in San Francisco, CA. Due to the short distances between many of the wineries and their home, the Rolls-Royce remained in excellent original condition and accumulated few miles. In late 2019 the owner sent the car to Canepa to have the car gone through completely. The car was placed in storage for a number of

Note from the publisher:
Welcome to our collector car marketplace where we feature thousands of classified ad listings of vintage cars for sale. We hope that you will bookmark our site and visit often; our cars are updated every day. Furthermore we encourage you to subscribe to our mailing list so that we may periodically notify you of interesting classic cars that become available.
Home > Classic Cars For Sale > Rolls-Royce > Silver Spur II > 1990 Rolls-Royce Silver Spur II