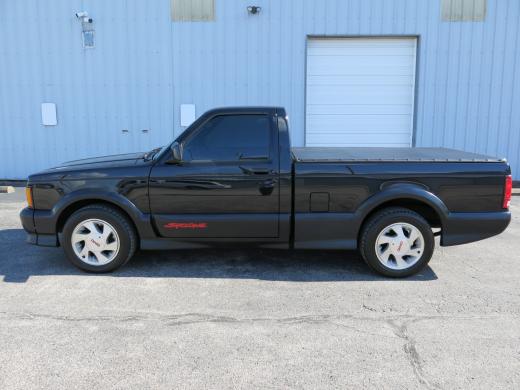 Syclone - (VIN: 1GDCT14Z6M8800839), midnight black with black cladding / black cloth seats with red seat piping, 31,600 original miles, 4-spd. auto trans., the fastest production vehicle in the world in 1991 and still faster than a lot of cars made today. Only built in 1991 and one of 2,995 built. It has never been in the rain. Stock except for a cat back exhaust system and Viper keyless entry alarm system. I have owned this truck (my 3rd Syclone) since 07/22/2014 it has nothing wrong with it and I love the truck, and I just don't use it enough. Have lots of photos, original sales brochures, original sale documents and progression of ownership documentation. New MSRP of $26,215.00.

Both have the factory LLB4 4.3L turbo V6 with intercooler, full-time AWD, GM 700R4 Corvette trans. They have clean CarFaxs showing no accidents and are original mileage. Both have been recently serviced with new Walboro high flow fuel pumps and new filters, and the SportMachines tuneup kit incl. new cap and rotors, plugs and plug wires, and trans fluid change. Both have functioning a/c, cruise and ABS and have been to the GMC dealer for all updates and recalls. No leaks from either. Both have new Bridgestone tires with under 500 miles on them and have been paint corrected and ceramic coated. Being marketed as a pair for $65,500.00. Call or text Brian @ (812) 760-5513 - Evansville, IN 47715.

Note from the publisher:
Welcome to our collector car marketplace where we feature thousands of classified ad listings of vintage cars for sale. We hope that you will bookmark our site and visit often; our cars are updated every day. Furthermore we encourage you to subscribe to our mailing list so that we may periodically notify you of interesting classic cars that become available.
Home > Classic Cars For Sale > GMC > Syclone > 1991 GMC Syclone