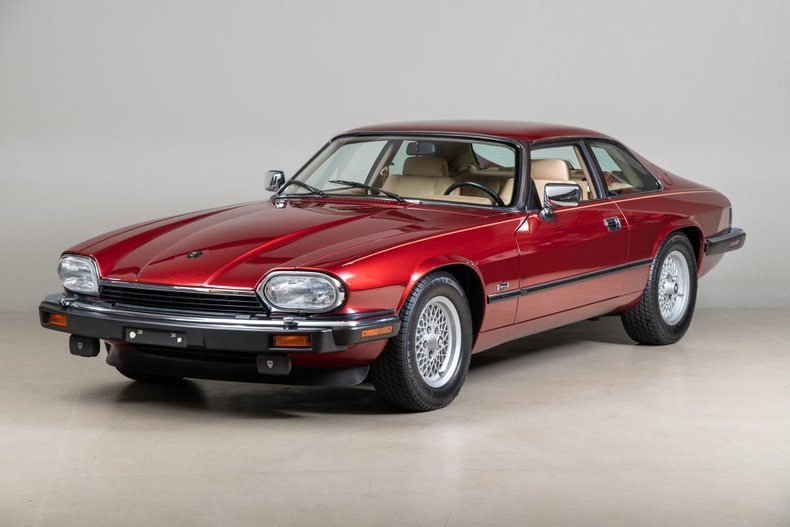 Price: Contact Seller for Price
1992 Jaguar XJS V12 View high resolution photos Concours-level preservation quality beyond belief 100% original Flamenco Red metallic paint & Creme leather interior 1 of 553 Coupes built in 1992 5.3-liter V12 engine The final design iteration of the XJS Recent comprehensive service Books, tools, spare, jack, and factory promotional documents Jaguars XJS was the last car that Sir William Lyons had his hand in designing. We decided from the very first that aerodynamics were the prime concern, and I exerted my influence in a consultative capacity with Malcom Sayer [the aerodynamicist credited with the E-type and other Jaguar icons], Lyons says in John Dugdales Jaguar in America. Occasionally I saw a feature that I did not agree with and we could discuss it...I took my influence as far as I could without interfering with his basic aerodynamic requirements and he and I worked on the first styling models together. This V12-powered XJS is quite possibly the finest example on the open market, cosseted by collectors for years, who coveted its immaculate original Flamenco Red metallic paint finish and flawless Creme leather interior. Most of its life was spent in Pennsylvania housed in a large Jaguar-only collection where the car was driven an average of 1,500 miles per year until 2006, after which it was driven sparingly, adding fewer than 100 miles per year. The special collection was featured in the Spring 2016 issue of Garage Style magazine. In 2016, the Jaguar moved to California where its new owner added it to a sizable collection. Keeping with the previous owners mantra, the XJS was exercised, but with the intent of keeping the miles low. Late in 2018, a northern California collector purchased the car and had the Jaguar immediately sent to British Sports Cars in San Luis Obispo, CA to have a comprehensive service performed on the XJS. Ensuring that all systems were functioning perfectly, this service included all fluids being changed (engine, transmission, differential, brake, coolant), new engine oil filter, along with new brake pads installed on all four corners. Since October 2018, the most recent owner has added less than 500 miles while exercising the V12 Jaguar on sunny weekends in Northern California. When the XJS came to Canepa it was instantly clear that the car had led a pampered and cared-for life with its previous owners. Everything about the Jaguar speaks concours-quality. The perfect Flamenco Red paint glistens in the sun, and the Creme leather interior feels as pliable and comfortable as when it was new. The V12 starts without hesitation, with the entire driving experience feeling like a new car off the showroom floor. Quite possibly the finest example of a Jaguar XJS V12 in existence, this iconic British coupe will provide years of enjoyment and comfort in a sublime luxury experience that Jaguar was known for. About the XJS The XJS had one major restyling during its long life, announced on May 1st, 1991, for this examples 1992 model year. Of the cars 490 panels, 180 were reworked or were completely new, but it was a subtle massaging that kept the heritage and design DNA of the car. The rear windows, which incorporated black plastic panels on the original design, were rounded into a more graceful shape, and the vertical brake lights were replaced with horizontal units that emphasize the width of the car. For the first time, U.S. cars received the the more handsome one-piece Carello headlights in place of four sealed-beams. 1992 JAGUAR XJS COUPE Engine: V-12, aluminum block and heads Displacement: 5,343 cc Compression ratio: 11.5:1 Horsepower: 262 @ 5,000 RPM Torque: 290-lb.ft. @ 3,000 RPM Fuel system: Lucas 26CU fuel injection Ignition system: Marelli HE Gearbox: GM Turbo Hydra-Matic 400 three-speed automatic PERFORMANCE 0-60 MPH: 8.7 seconds Top speed:

Note from the publisher:
Welcome to our collector car marketplace where we feature thousands of classified ad listings of vintage cars for sale. We hope that you will bookmark our site and visit often; our cars are updated every day. Furthermore we encourage you to subscribe to our mailing list so that we may periodically notify you of interesting classic cars that become available.
Home > Classic Cars For Sale > Jaguar > XJS > 1992 Jaguar XJS