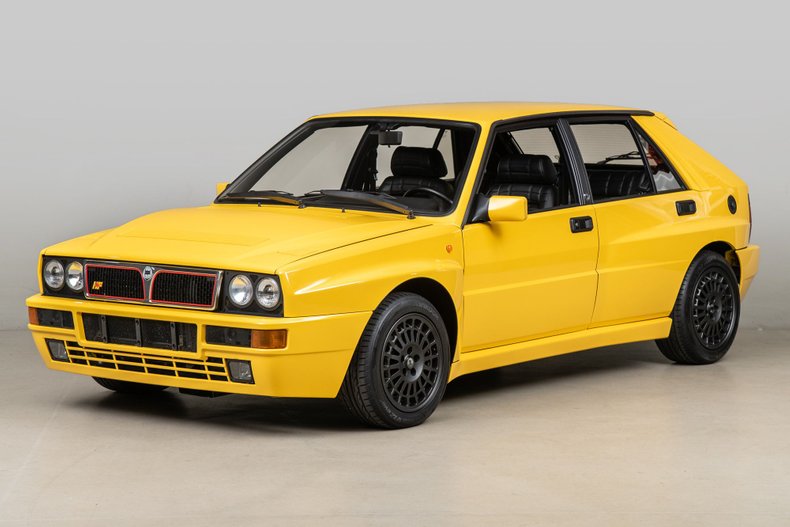 Price: Contact Seller for Price
View high resolution photos 4,075 miles! (6,558 kilometers) Italian delivery, 2 owners since new Absolute as-new, show-quality condition Custom Canepa magnesium graphite wheel coating finish One of 295 Giallo Ferrari special editions Rare leather interior and factory air conditioning Complete with books, tools, jack, spare, and safety triangle Approaching winning their 5th rallying Drivers and Constructors Championship, Lancia revealed their heavily revised Delta HF at the Frankfurt Motor Show in 1991, famously now known as the HF Integrale Evoluzione. They began building the street cars in October of 1991 and continued into 1992. Despite having retired from racing after winning the 1991 Championship, two factory-backed rallying teams continued in 1992 and Lancia saw themselves win their sixth and final consecutive Constructors World rally Championship. The Evoluzione would go on to become a legend in the hearts of both fans and drivers alike, with its remarkable handling, factory rallying capability, and iconic 90s design. This special edition Delta HF Integrale was delivered new in Italy in 1992 and kept by the same owner until 2017. Obviously caring for the car immensely, the car is all original, stock and unmodified, and a true time capsule of what a factory Delta HF Integrale Evoluzione was. As an avid collector, he recognized the value of the important car, as it was the final homologation car for the Lancia Rally team that won five WRC titles with the Integrale. Unique to this car is the black leather interior, a rarely seen specification. Factory air conditioning and a leather covered Momo steering wheel add to this HF Integrales appeal and uniqueness. It is also one of only 295 examples painted in Ferrari Fly Yellow, coined Giallo Ferrari editions. Being an Evoluzione model, the front and rear track of the car is wider by 2.3 compared to earlier Deltas, and wheel arches were extended to increase the cars width to a menacing 69.6 inches. Its four-wheel drive system features an epicyclic center differential with a torque splitter, plus a Ferguson viscous coupling and Torsen rear differential. The 2-liter engine was tuned to produce 210 horsepower at 5,750rpm stock. On the outside, improvements were comprehensive. This includes new grilles in the front bumper to improve the airflow for engine cooling; a redesigned hood with new lateral air slats to further assist under hood ventilation; an adjustable roof spoiler above the tailgate; new five-bolt wheels with the same design as the rally cars; and a new single exhaust pipe. Canepa recently acquired this special example and put the Lancia through the Canepa Difference process. After a mechanical inspection and service along with a cosmetic inspection, the car was given a complete concours-level detailing. This included removing all of the factory cosmoline on the underside of the car, revealing the factory finishes and materials as through the car was just assembled at the factory. The car was treated to a full paint polish using only foam pads polishes, enhancing the already dazzling sheen of the Fly Yellow paintwork. The interior was thoroughly cleaned, the factory black leather conditioned, and every surface was as spotless as it was when it first left the Italian factory. Lastly, for the finishing touch, the original rally wheels were refinished in Canepas custom magnesium graphite coating, adding an understated but aggressive look to the car. Certainly, the Delta HF Integrale Evoluzione is one of the best road cars ever made and until recently was not allowed into the United States. Well, the wait is over. Here is one of the most flawless and low mileage examples in existence, serviced and road ready, and prepared to be enjoyed to the fullest. Whether you channel your inner Walter Rhrl while driving on the backroads