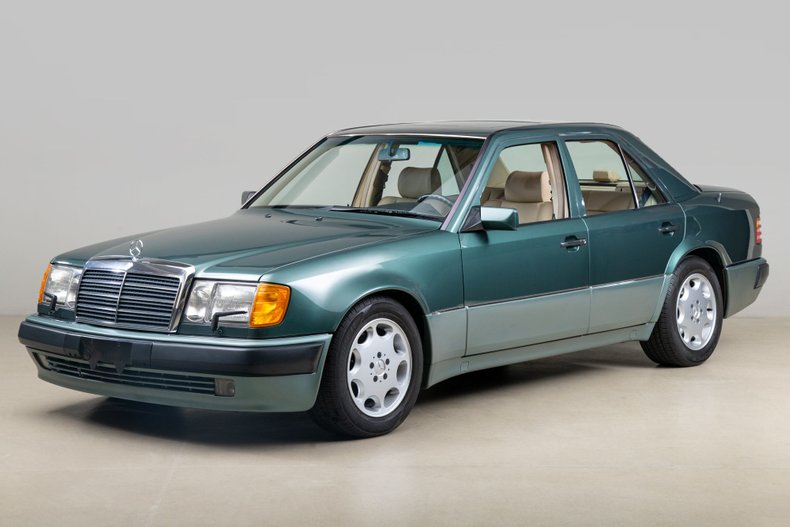 Price: Contact Seller for Price
Click here to view high resolution photos A wolf in sheeps clothing Built in collaboration by Mercedes-Benz and Porsche in limited production 5.0-liter V8 engine, 4-speed automatic transmission, self-leveling suspension Includes owners manuals and documentation, tool kit, jack, and spare It is to no surprise that the Mercedes-Benz 500E was one of the best performance sedans in the automotive industry. With collaboration from Porsche, Mercedes developed one of the most significant luxury sedans ever created. The 500E came equipped with a powerful 5.0-liter V8 engine, developing 354 lb-ft of torque. The Mercedes could reach a limited top speed of 155mph with no effort, while maintaining the Mercedes-Benz level of character and comfort. Some of the unique characteristics that makes the 500E stand out from other W124 sedans, is an array of design changes throughout the car. The wider 1.5-inch track and flared fenders, allowed for a set of 16x8 wheels that were only made for the 500E with high performance 225/65/R16 tires. The body of the car also came with unique side skirts and front air dam. This entire package made the 500E a powerful, superior handling sport sedan. This Mercedes-Benz 500E was ordered at Mission Viejo imports. The 500E was delivered to its first owner in May of 1992. The owner had different cars throughout the years, but he never wanted to sell the 500E. The car is finished with a two-tone palm green undertone and spruce green main body. The 500E also featured a creme beige leather interior. During his ownership, the owner did meticulous service to the car, as shown in the services records. The owner also took the Mercedes to his summer house in Montana, where he enjoyed it through the summer days along with his family. This Mercedes stayed with its original owner, and his family for a total of 24 years, then sold in 2016. The second owner accumulated just over 6,000 miles in the 6 years of ownership, including mechanical refurbishments that brought it back to a first-class condition. This 500E was also featured by Journalist and Car enthusiast Doug DeMuro in his YouTube channel. With over 1 million views, Dough describes the quirks and features that made the Mercedes 500E an iconic car for its era. Upon arrival at Canepa, the Porsche-built Mercedes was inspected thoroughly from front to back. The super sedan was immediately placed into the Canepa Difference process, first going through an extensive reconditioning, and servicing as needed. Once completed, Canepas in-house detailing department delivered one of Canepas signature concours-level details. The underside was cleaned to a show quality standard. The exterior was hand washed, carefully polished and waxed. The interior, engine and trunk were treated to an equal level of cleaning, ensuring nothing was left untouched. The Mercedes-Benz 500E is the example of what car manufacturers can do when they combine their knowledge and develop a product. The 500E gave the opportunity to step on the market of fast sedans as it previously did not have any competitors to cars such as the M5 of the era. The collaboration between Mercedes-Benz and Porsche created a very iconic sedan. Power, comfort, and a timeless design, very well describes what the 500E represented to Mercedes at the time. It opened the doors and it is now one of the most iconic Mercedes-Benz Sedans that you can own.

Note from the publisher:
Welcome to our collector car marketplace where we feature thousands of classified ad listings of vintage cars for sale. We hope that you will bookmark our site and visit often; our cars are updated every day. Furthermore we encourage you to subscribe to our mailing list so that we may periodically notify you of interesting classic cars that become available.
Home > Classic Cars For Sale > Mercedes-Benz > 500E > 1992 Mercedes-Benz 500E