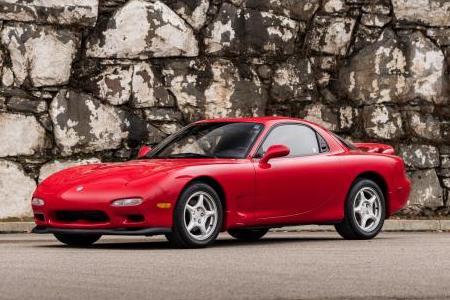 Introduced to the public in 1992, the third-generation Mazda RX-7, dubbed the FD series, improved upon two previous generations of successful rotary-powered sports car platforms. The FD RX-7s were the first mass-produced cars to feature a sequential twin-turbocharged system. This system was mated to its 1.3L rotary-powered engine to produce 252 horsepower. Unlike its piston-powered counterparts, the RX-7s rotary design allowed for high-revving, smooth power delivery that took drivers by surprise. Coupled with a lightweight, minimalistic body design, the FD RX-7 made a huge impression among sports car enthusiasts. Weighing in around 2,800 pounds with a near 50/50 weight distribution, the FDs handling capabilities were off the charts making it a complete sports car package. Not only was the RX-7 fast in every way, but it was also one of the prettiest designs to come out of Japan at the time. The long nose and shorter tail design was in keeping with Mazdas LeMans Racers and also featured one of the best design cues of all time- The subtle double bubble roofline commonly found on Zagato Bodied Ferraris, Alfa-Romeos and the like.

Mazda offered the FD RX-7 to the US market for 3 years; 1993, 1994, and 1995. All told, approximately 13,879 cars were produced for the US in total throughout the three-year production run. Four trim packages were offered for the series, a base trim with cloth seats, LSD and tape player, the touring package which featured leather seats, sunroof, Bose Wave Stereo, fog lights, and rear wiper, then there was the R1/R2 packages available for those hardcore drivers. The R1 package was offered for the 1993 cars with the designation changing to R2 for the 1994 and 1995 cars. The R1 package provided owners with a race-ready car that was stripped of nonessential items like sunroof, cruise control, and CD player and had suede seats, stiffer springs, Bilstein shocks, front strut bar, additional oil cooler, and front/rear spoilers. The R1 was considered the rawest form of the RX-7 that Mazda could offer. After complaints of harsh ride quality on the R1s, Mazda softened the suspension set up for the R2 package, which is the only difference between R1 and R2. All told, about 2,600 FD RX-7s were produced in R1/R2 format making these cars relatively rare with respect to other mass-produced Japanese sports cars of the time period and will thus be the cars that collectors flock to in the coming decades.

The 1993 Mazda RX-7 R1 on offer here, chassis number JM1FD3312P0201851, is an all-original, unmodified example with only 15,770 miles from new. Finished in classic Vintage Red only 1,177 R1s were painted in this color. This R1 was sold new out of Ryan Oldsmobile-Mazda of Brooklyn Center, Minnesota on December 9th, 1992. Included in the owners manual booklet are the original business cards for the salesman at Ryan Mazda. The car traveled a mere 7,743 miles for the first 11 years of its life and remained with the first owner until 2015- A total of almost 23 years! During the first ownership, it was regularly serviced at Eich Mazda of Saint Cloud, MN. The Carfax details every service entry and what was performed. Unfortunately, all of the records for this car were purged from Eich Mazdas system so no repair orders/invoices are present. The second owner acquired the car in November of 2015 and it lived in North Carolina where it was routinely serviced at Mazda of South Charlotte. We have 13 pages of service records from Mazda of South Charlotte that are viewable by following the View Documents tab.

Most FD RX-7s have been modified, heavily driven, raced, and abused. We would venture to say that 5% of all RX-7 production remain in stock, low mileage condition today. Collector grade examples are few and far between especially those of the most desirable R1/R2 specification. Values have been climbing for such examples as the Fast and the Furious generation of car enthusiasts start making their mark on the collector car hobby. Here at LBI Limited, we are often asked for our opinion as to what cars to invest in with a budget of $50,000? The FD RX-7 is always high on the list of answers to that question as it checks many collectability boxes at an attainable price point. The FD RX-7 made Car and Drivers 10 Best Sports Cars list every year it was offered in the US. In our eyes, it is one of the greatest mass-produced Japanese sports cars of all time. Awe experience a generational shift in the classic car hobby, hero cars such as the MK IV Supra, Nissan 300ZX, Skyline and the FD RX-7 will only continue to rise in value but only examples of the lowest mileage, quality, and originality will be in demand.

Note from the publisher:
Welcome to our collector car marketplace where we feature thousands of classified ad listings of vintage cars for sale. We hope that you will bookmark our site and visit often; our cars are updated every day. Furthermore we encourage you to subscribe to our mailing list so that we may periodically notify you of interesting classic cars that become available.
Home > Classic Cars For Sale > Mazda > RX-7 > 1993 Mazda RX-7