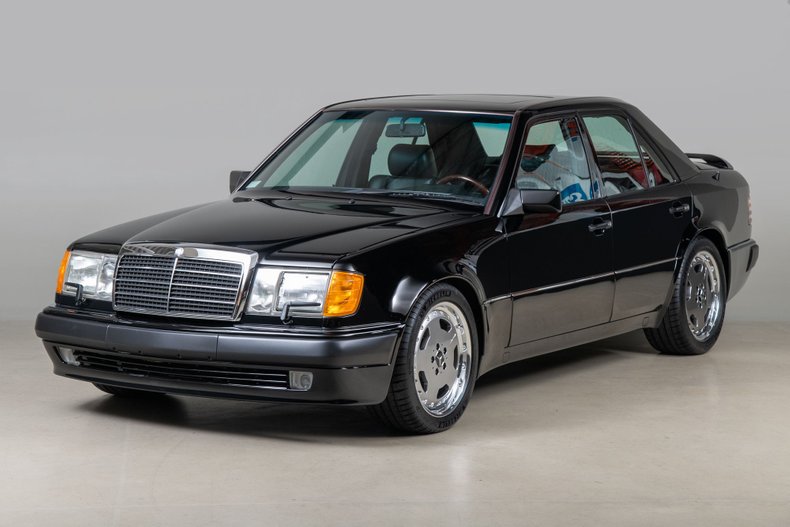 1993 Mercedes-Benz 500E VIN: WDBEA36E2PB987138 Previously owned by comedian Red Skelton and wife, Lothian Skelton Built in a collaboration between Porsche and Mercedes-Benz in limited production Extremely rare factory black over black specification, believed one of three built All original black paint finish, California car since new Large collection of service documents, includes owners manual Canepa upgrades including BBS Aero II wheels and cosmetic updates One of the best under-the-radar cars in the automotive world is the Mercedes-Benz 500E. Built in collaboration with Porsche in the early 90s, it is one of the greatest Q-ship sedans ever created. Using parts from the SL sports car and accessing Porsches handmade expertise, these special cars took an average of 18 days to build. With the immensely powerful 326 horsepower 5.0-liter V8 engine came impressive performance with a limited top speed of 155mph, all while maintaining the Mercedes-Benz level of quality and comfort. A few clues gave away that this was not your ordinary W124 was its aggressive stance that has 1.5-inch wider track, 0.9-inch lower profile, flared fenders, side skirts, and a front air dam. Thankfully the final package, to the untrained eye, was subtle enough to not attract unwarranted attention from law enforcement. This Mercedes-Benz 500E represents a rare example of the collaboration between Porsche and Mercedes. Color options for 500E were fairly limited, and many of the colors were relegated to the usual suspects of silver, dark grey metallic and some other unusual colors such as Spruce Green metallic. However, a factory black over black 500E is extremely rare, even more rare that this car retains all of its original factory paint finish. A stunning example, it only adds to its Q-ship status and retains an aggressive presence that is lacking from the rest. Pair that with the visceral exhaust note that encourages you to mash the throttle at all times, this unique Mercedes-Benz 500E is the one to have. Purchased in October of 1993, was first purchased by a model based in Los Angeles, CA. She owned the car for a few years before the stealthy 500E was purchased by famous comedian Red Skelton and his wife, Lothian Skelton. Red hosted the show The Red Skelton Show from 1951 to 1970, applying his special variety of comedy to television, film and radio. He retired from performing live in 1993 when he celebrated his 80th birthday. He and his wife, Lothian, lived in the Los Angeles area until Reds passing in 1997. Lothian moved to the Palm Springs area a few years later, and would drive the car sparingly. Most of the miles on the car were amassed during the first 8 years of ownership, with the Mercedes-Benz driven less than 3,000 miles between 2001 and 2019. The Mercedes was maintained regularly at the Mercedes-Benz dealership in Palm Springs, California, ensuring that it was in proper driving order if Lothian ever wanted to take the Mercedes out for a drive. When the 500E recently arrived at Canepa, there was some disbelief that involved the black over black specification. Supposedly with only a few ever made, seeing one in person was a rare occasion indeed. With not a moment to spare, Bruce Canepa had a vision with the car and immediately entered it into Canepas system to receive the Canepa Difference process. Comprising of a complete mechanical inspection and service with a concours-level detailing, this process is one of the many aspects why Canepa cars are known for their quality. It was then decided that a set of BBS Aero II wheels, with the centers painted in Liquid Silver metallic with polished rim lips, would give the car a subtle yet updated look. In the meantime, it was given a complete concours detailing, washing the underside of the car, exterior, engine bay, and cleaning every square inch of the interior. The factory black paint finish was polished with only foam pads and polishes, enhancing the deep luster

Note from the publisher:
Welcome to our collector car marketplace where we feature thousands of classified ad listings of vintage cars for sale. We hope that you will bookmark our site and visit often; our cars are updated every day. Furthermore we encourage you to subscribe to our mailing list so that we may periodically notify you of interesting classic cars that become available.
Home > Classic Cars For Sale > Mercedes-Benz > 500E > 1993 Mercedes-Benz 500E