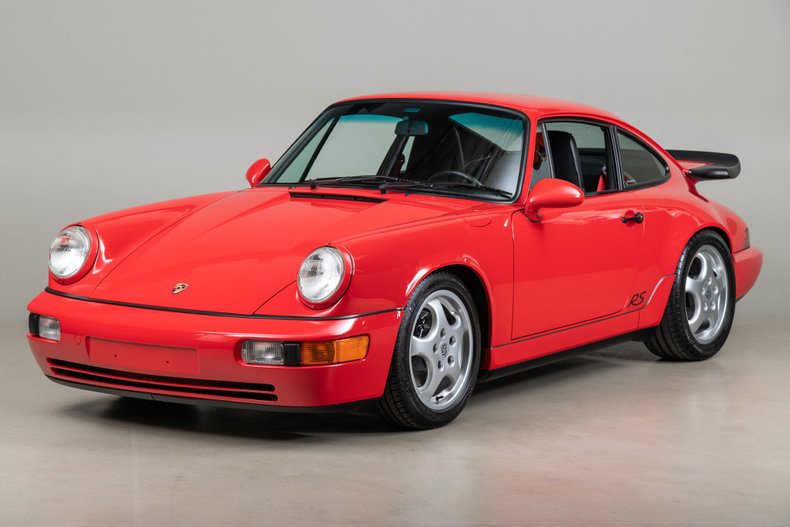 1993 Porsche 911 RS America View high resolution photos 19,989 original miles Original paint and original interior, immaculate throughout One of 701 produced, limited edition Carrera RS made exclusively for the U.S. Optioned with air conditioning and a limited slip differential Extensively serviced by Jerry Woods Enterprises Copy of window sticker, original owners manuals, tools, jack, and spare Close-ratio 5-speed manual transmission, 3.6-liter flat six engine Americans are generally used to not being able to get all the types of cars that the Europeans are able to enjoy due to stricter safety and emission regulations. However, once in a while the stars align and let a truly awesome automobile make its way to the U.S., even if those stars being aligned is due to the hard work of enthusiasts. When Porsche announced that the new lightweight 964 Carrera RS would not make its way to American shores, there was an uproar among American Porsche enthusiasts were ready to purchase a lighter weight and focused Carrera. Undeterred, these enthusiasts constantly hounded Porsche to release a car that they could actually buy, and in 1993 Porsche relented with this: the RS America. Built to meet U.S. regulations while providing a more focused driving experience, the RS America was lighter, nimbler, faster, and most importantly a crucial step in returning the 911 to its racing heritage. This Guards Red example was purchased by the Valley Auto World dealership in Fayetteville, North Carolina in 1993. Optioned with air conditioning with full climate control and a limited slip differential, it had an MSRP of $59,243 according to the copy of the window sticker. During its first few years almost 50% of the current mileage was added, serviced regularly at Atlantic Autowerks, Ltd. in Virginia Beach, Virginia according to the Porsche maintenance booklet. The RS America would have a couple of different owners between 1996 and 2012, where in 2012 it was purchased by Paul Camusi of Chico, California. When he purchased the car, instead of having it shipped to his home he had it sent directly the Porsche specialists at Jerry Woods Enterprises. With the intent to completely service everything on the 911, the RS America spent a total of 3 months at Jerry Woods, leading to a complete bill of $18,910.46. Items worked on and serviced included: battery, ABS relay, valve cover gaskets, air filter, oil filter, spark plugs, fuel filter, fan and a/c belt, head temperature switch, fuel pressure regulator, oxygen sensor, transmission fluid change, brake fluid flush, A/C fan, front left and right sway bar drop links, front brake pads and discs, front brake vibration pad and front brake pad sensors, hood shocks, valve cover clips for spark plug wires, exhaust system, muffler mount, A/C refrigerant refill, new ignition wires, and the distributor cap and rotor. Work was completed for Paul at the very end of December, upon which now he could enjoy his car with peace of mind. In October of 2013 the RS America made its way back down to the Bay Area where it was serviced at Carlsen Porsche of Redwood City. During this time the cars A/C system was serviced along with some other minor servicing. Sometime in the middle of 2014 Paul sold the RS to a friend, David Mohlman. Mohlman, a purveyor of collector cars, kept it for a short time before selling it to David Jacobson of Collector Car Showcase of Oyster, New York. David had the car shipped in August to his location where the pristine RS America was kept in their museum, free from the elements to preserve its exquisite condition. David kept the car in his collection for a little more than 5 years before Canepa acquired it recently. Once it arrived it was completely inspected from front to back. Its condition was a clear indicator that the car was cared for immensely and respected throughout

This 1993 Porsche 911 was listed for sale on 11-25-19 06:33:41. The vehicle color is Red and VIN is not available . Kindly check ad for seller's location. Seller`s stock ID is canep6093. There are other Porsche cars currently listed for sale on our website. You may desire to see what other Porsche cars are selling for by visiting our Sales Data page.