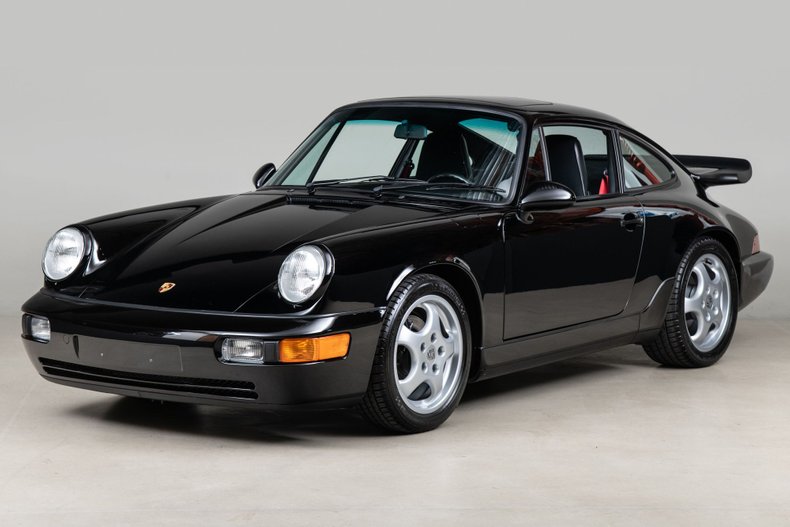 Price: Contact Seller for Price
1993 Porsche 911 RS America View high resolution photos One of 701 produced Has every available factory option: A/C, Radio, Sunroof, and Limited Slip Differential 25,690 original miles Has copy of window sticker, books, and Porsche Certificate of Authenticity Complete concours-level detailing by Canepa 5-speed manual transmission 3.6-liter twin-plug flat six engine with 247 horsepower Americans are generally used to not being able to get all the types of cars that the Europeans are able to enjoy due to stricter safety and emission regulations. However, once in a while the stars align and let a truly awesome automobile make its way to the U.S., even if those stars being aligned is due to the hard work of enthusiasts. When Porsche announced that the new lightweight 964 Carrera RS would not make its way to American shores, there was an uproar among American Porsche enthusiasts ready to purchase a lighter and more focused Carrera. Undeterred, these enthusiasts constantly hounded Porsche to release a car that they could actually buy, and in 1993 Porsche relented with this: the RS America. Built to meet U.S. regulations while providing a more focused driving experience, the RS America was lighter, nimbler, faster, and most importantly a crucial step in returning the 911 to its racing heritage. This 1993 Porsche 911 RS America was sold to Silver Star Motors, Inc. of Long Island City, New York. Painted black with a black interior with cloth seats, the RS America was optioned with every line item you could add from the factory. These 4 specific options were air conditioning, an electric sunroof, a torque limited slip differential, and a Porsche AM/FM radio with cassette. The total MSRP of this car in 1993 was $61,612.00. The RS Americas title for its first owner was reported on July 15th, 1992. During that time, the car moved from New Jersey to Pennsylvania, eventually settling down in Wisconsin. The car remained there with its owner until approximately 2014 and was brought to Arizona. The most recent owner purchased the car in March of 2016, adding the car to his Porsche collection. Being known for his highly original examples and a fan of the RS Americas, this black over black example fit right in with his other cars. He kept the car for almost 4 years, keeping the car maintained and driving it sparingly while it was in his possession. When the RS America arrived at Canepa, it was inspected from front to back. Evident that it had enjoyed a very pampered lifestyle from its excellent original paintwork and original factory finishes with little to no wear throughout the car, confirmation that the previous owners cared for it extremely well. The RS was given a complete concours-level detail which also included a full cleaning removal of the factory cosmoline underneath, revealing factory finishes in excellent condition. The black paintwork was polished using only foam pads to bring out a shining luster from the original paint finish. Now ready for its next lucky owner to enjoy the rewarding and rare experience of driving an RS America, this example will be sure to leave you with wanting to drive in it more and more and experience Porsches RS for America.