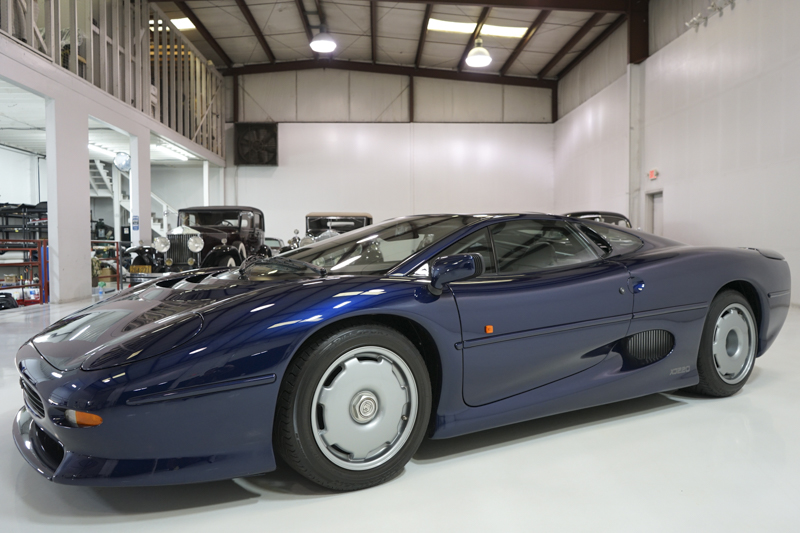 Price: USD $495,900
Mileage: 1,199
The XJ220 claims a unique position among the handful of powerful supercars that emerged in the late 1980s. More luxurious and timelessly styled than some of the no-frills wedge designs of the period, the model began as the dream of Jaguars director of product engineering, Jim Randall, who wanted to field a car similar toPorsches 959. Jaguar Designs Keith Heflet penned the gorgeous low-slung bodywork, whilst engineering focused on integrating a 48-valve racing V-12 developed by Tom Walkinshaw Racing (TWR).Debuting to great acclaim at the 1988 Birmingham Motor Show, the prototype XJ220 was approved for production after customer interest skyrocketed. With the Coventry factory at capacity, JaguarSport, a racing concern co-owned by the manufacturer and TWR, was assigned the task of transforming the gargantuan show car into a tractable production model. Exchanging the original V-12 for a turbocharged V-6 that had been successful in the XJR-10 and 11 race cars, the development team was able to shorten the wheelbase by eight inches. After suspension work at the Nrburgring, where the model set a lap record, and the appointment of a sumptuous interior styled by Nick Hull, the XJ220 began making deliveries in 1992. Five hundred forty-two horsepower and 475 foot-pounds of torque, performance numbers that favorably compare with many of todays fastest cars, gave the XJ220 awesome power, quicker to 60 mph and faster (217 mph!) than both the Ferrari F40 and the Lamborghini Diablo. The exquisite 1994 Jaguar XJ220 featured here is finished in the highly sought after color combination of Le Mans Blue over a Charcoal Grey Connolly leather interior. This late production example was completed in March 1994, has been meticulously maintained from new and was just released from a private collection. Today this XJ220 presents in spectacular original condition while a mere 1,929km (the equivalent of only 1,199 miles) are present on the odometer. The fuel cell bladders and timing belt have already been replaced and this supercar delivers just as much of a trilling driving experience as when it was new! Previously the XJ220 was a model that spent years undervalued and appreciated. By comparison the McLaren F1, the model that beat the XJ220s record for worlds fastest production car in 1998 is a car today that consistently changes hands with prices in excess of $10 million. Jaguars supercar delivers comparable performance and with renewed interest in the model and limited production of less than 300 cars the XJ220 is quickly becoming one of the most sought after classic supercars for investment level collectors today! When seated in the pilots chair you are surrounded by gauges that are integrated into the driver door panel, while the full Connolly leather interior reminds you that this is an English supercar! The XJ220 represents the ultimate combination of English craftsmanship, engineering and performance that still rates comparatively of modern supercars. We truly believe the investment return of this meticulous maintained, incredibly low mileage Jaguar XJ220 will grow beyond your imagination in the coming years. Ready to make an investment you can actually enjoy?Classic carshave proven to be among the most resilient and rewarding investments in recent years with the Historic Automobile Group Index (HAGI) jumping 39% in 2013, 16% in 2014 and 17% in 2015 while posting gains of 467% over the last 10 years. Pleasecontactone of our expert sales consultants for more information. They will be happy to give you a complete walk-around, supply you with a more detailed description, and answer any questions you may have. Buy with confidence.

This 1994 Jaguar XJ220 was listed for sale on 1-26-20 11:06:48. The vehicle color is Le Mans Blue and VIN is SAJJEAEX8AX220618 . Kindly check ad for seller's location. Seller`s stock ID is danie407332_XJ220. There are other Jaguar cars currently listed for sale on our website. You may desire to see what other Jaguar cars are selling for by visiting our Sales Data page.

Note from the publisher:
Welcome to our collector car marketplace where we feature thousands of classified ad listings of vintage cars for sale. We hope that you will bookmark our site and visit often; our cars are updated every day. Furthermore we encourage you to subscribe to our mailing list so that we may periodically notify you of interesting classic cars that become available.
Home > Classic Cars For Sale > Jaguar > XJ220 > 1994 Jaguar XJ220